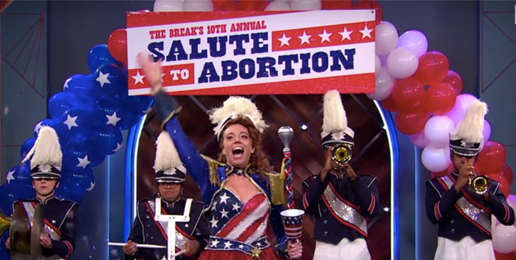 Abortion is much in the news lately as Judge Brett Kavanaugh—who many abortion-cheerleaders fear will overturn Roe v. Wade—stands poised to become the newest member of the U.S. Supreme Court. Their protestations to the contrary, abortion supporters—who call themselves euphemistically “pro-choice”—are, in reality, pro-death. Women who seek abortions do not seek centrally to terminate a pregnancy. They seek to terminate a human life.

Here’s a thought experiment that might help reveal the ugly truth hiding behind euphemisms: Imagine if all these past 45 bloody years, it had been technologically possible to extract tiny humans from the wombs of their mothers at the earliest stages of pregnancy and incubate and nourish them until they reached full development at which point they could have been placed for adoption. The pregnancy would have been terminated but the lives of babies spared. Does anyone really believe many women would have chosen to terminate their unwanted pregnancies without terminating the lives of their children whom they didn’t want?

Even without such technology, women could have chosen to allow the termination of their pregnancies to occur naturally and without killing their human offspring. All they had to do was wait 1-8 months and voilà, pregnancy terminated, babies’ lives spared. But the termination of a pregnancy was not the ultimate goal. Death of a new human life—the product of conception between two humans and one with unique DNA—was the ultimate goal. The incomprehensible truth is that women who choose to “terminate their pregnancies” prefer the ignoble choice of death for their children over the noble choice to give their children life in the arms of women and men who want them.

Defending abortion in such a way as to mask the barbarism of the act requires recasting incipient human life as either non-life or life unworthy of any rights (The non-life argument is challenging because of, well, science). Since ideas have consequences, we’re seeing that what was once considered shameful and tragic—that is, killing one’s own offspring—is now celebrated by the rich and famous. Actress Martha Plimpton encourages women to “shout their abortions,” Hollywood made a romantic comedy about abortion, and comedienne-manqué Michelle Wolf performed an abortion-celebrating comedy sketch titled “Salute to Abortion” for her now-canceled show.

The idea that because tiny womb-inhabiting humans are not fully developed, lack self-awareness, depend on others for survival, have physical anomalies that will cause suffering, are afflicted with conditions “incompatible with life,” or are inconvenient to their mothers, those mothers have the right to have them killed has far-reaching, tragic, and predictable consequences.

As I wrote prior to HB 40 being signed into law, there are no criteria that Leftists can manufacture to defend the right of some humans to snuff out the lives of other humans that apply only to incipient human lives. Whether those criteria are intrinsic or extrinsic to humans in the womb, they can be applied to humans who escaped the torture chamber that the womb has become.

Unethical Princeton University bioethics professor Peter Singer wants to extend killing “rights” 30 days post-natally to allow parents to ascertain the health status of their conditionally wanted children. After all, some imperfect humans may have escaped all the currently available tests for determining human perfection and, therefore, “wantedness.”

As I wrote earlier, Leftists who believe that more developed, self-aware, able-bodied, and cognitively superior humans have the right to exterminate less-developed, or cognitively or physically impaired humans whose self-awareness is diminished or absent are kindred spirits with Singer.

The infamous Singer himself acknowledges in his book Practical Ethics that we have already started down the unctuous slope:

I do not deny that if one accepts abortion on the grounds provided in Chapter 6, the case for killing other human beings, in certain circumstances, is strong. As I shall try to show… this is not something to be regarded with horror…. [O]nce we abandon those doctrines about the sanctity of human life that… collapse as soon as they are questioned, it is the refusal to accept killing that, in some cases, is horrific.

Then in 2011, two philosophers at the University of Melbourne, Alberto Giubilini and Francesca Minerva, published a paper in which they advocated for “after-birth abortion”:

[W]e argue that, when circumstances occur after birth such that they would have justified abortion, what we call after-birth abortion should be permissible.

One of the many grotesque arguments “progressives” use to rationalize human slaughter is to suggest that in order to prevent adult women from choosing to have back-alley abortions, we must keep the slaughter of humans in the womb legal.

In 1930, abortion was listed as the official cause of death for almost 2,700 women…. The death toll had declined to just under 1,700 by 1940, and to just over 300 by 1950 (most likely because of the introduction of antibiotics in the 1940s, which permitted more effective treatment of the infections that frequently developed after illegal abortion). By 1965, the number of deaths due to illegal abortion had fallen to just under 200.

Compare those numbers of accidental deaths to the 647,000  intentional killings of humans in the womb just this year.

Someone recently asked me who would care for and how we could afford all the “unwanted children” that would result from the abolition of legalized human slaughter (well, that’s not exactly what he called it). It’s important to note that not all of the babies who are currently in the death chute, destined by their mothers to be killed would become wards of the state or dependent on social services. Moreover, the $500 million dollars that we currently give to Planned Parenthood for their bloody business could be re-allocated to organizations that help needy families—including faith-based organizations.

If legalized feticide were abolished, the very real possibility exists that some—perhaps many—women would use their “reproductive rights”—rights that don’t include killing other humans—more responsibly. There are reasons we have a million abortions every year, and one of those reasons is we’ve made it cheap and easy.

And some would freely choose to have back-alley abortions. If infections followed, they would be treated with antibiotics. None of these women would have their hearts injected with digoxin, their skin burned off, their brains scrambled and sucked out, or their limbs torn off. Let’s remember that none of the over 60 million humans slaughtered in the womb since 1973 chose her or his own slaughter.

But most important, no amount of public expense can ever justify the deliberate killing of innocent humans.

Once humans arrogate the right to determine the value of the lives of others or, as with abortion, when humans predict the future value or experiences of the lives of others or the costs to others of the lives of weaker humans, we have launched ourselves down a slippery slope that will end in involuntary euthanasia (also known as murder) of those who are deemed unworthy. Once we say that a person’s unwantedness or presumed unwantedness or physical imperfections rob her of her right to exist and justifies her killing, how is it possible to prevent the killings of others whom the powerful deem unworthy? Once we rid ourselves of that pesky notion about the “sanctity of life,” who among us is safe?