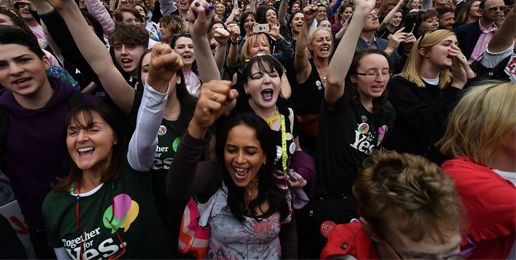 Most Americans have seen footage of the obscene cheers of women and men in Ireland over the vote to repeal the 8th Amendment to the Irish Constitution which protected the right of the unborn simply to exist. Yes, they cheered for the legal right of women to have their own children exterminated. Mairead Enright of the Irish organization Lawyers for Choice perfectly captured the unholy essence of their response: “It’s feminist Christmas.”

This display of pagan jubilation over child sacrifice reveals the same view of incipient human life that American feminist and columnist for The Nation Katha Pollitt holds. Pollitt criticizes abortion fans for portraying abortion as a “difficult, agonizing decision.” She wants to train people to view human slaughter as a “positive choice” by de-stigmatizing feticide. She wants feticide-choicers to show that they don’t “agonize,” that they “just forgot” their pills,” and that they “just didn’t want to have a baby now”:

Most women who have abortions are having them for socioeconomic and personal reasons, and it’s important to defend that. It’s important to say that women have had an abortion because they want to finish their education, because they’re not in a relationship that would make for good parenting or they don’t want to be a single mother. They want to focus on their work life, they feel they’re too young, they’re not in a good place themselves, they have all the children they want.

Yep, along with the living blob of human DNA, ya gotta get rid of the pesky stigma that produces those icky feelings—otherwise known as “conscience.”

In a Naral Pro-Choice Colorado event, Pollitt trotted out the back-alley-coat-hanger trope, arguing that “To criminalize abortion is to go back to where we were in the ’50s, and what you had then was a tremendous amount of illegal abortion, which was often quite dangerous.”

Well let’s take a glimpse at abortion and danger in the 1950s. Here’s what the liberal Guttmacher Institute says:

In 1930, abortion was listed as the official cause of death for almost 2,700 women…. The death toll had declined to just under 1,700 by 1940, and to just over 300 by 1950 (most likely because of the introduction of antibiotics in the 1940s, which permitted more effective treatment of the infections that frequently developed after illegal abortion). By 1965, the number of deaths due to illegal abortion had fallen to just under 200…. ”

Let’s compare this tremendous number of deaths of women in the 30s, 40s, 50s, and 60s to the number of abortion-related deaths since 1973. As of today, there have been approximately 60,500,000 humans killed in the womb since 1973—and that number includes thousands of late-term abortions performed on tiny humans who experience pain.

“Seattle has some particular significance for me for lots of reasons. I’ve got a lot of family here, some of whom are here in the audience tonight. I also had my first abortion here at the Seattle Planned Parenthood. YAAAYYY!

Then there’s the 2014 “indie rom-com” movie Obvious Child in which former Saturday Night Live cast member and Parks and Rec actress Jenny Slate has an abortion after a one-night stand. In that movie, one character utters this loathsome and inane line:

“We already live in a patriarchal society where a group of weird old white men in robes get to legislate our c*#ts.”

One can assert the absolute right of the mother to choose only if one has settled the other question regarding when life begins and when incipient life deserves protection. If indeed life begins at conception or if there is even a possibility that life begins at conception, should women have the choice to terminate that life? No rights are absolute and without limit. If a woman’s right to choose comes into direct conflict with a fetus’ competing right merely to exist, which right—existence or reproductive choice—should be preeminent? I would argue that existence is a right of a higher moral order. It is, in fact, the right from which all others derive and depend.

Abortion proponents describe the unborn as “potential” human life, thus excluding them from state protection. As Hadley Arkes, Amherst professor of jurisprudence, wrote in First Things, “The fetus may be a potential doctor, a potential lawyer, or a potential cab driver; but he cannot be considered merely a potential human being, for at no stage of his existence could he have been anything else.”

Scientists tell us that the fetus is life, it is human, and it is distinct from its mother. In 1990 physician Dr. Joel Hylton wrote in the Journal of the American Medical Association, “Who can say that the fetus is not alive and is not a separate genetic entity? Its humanity… also cannot be questioned scientifically. It is certainly of no other species.”

If we’re willing to allow pre-natal humans to be killed because they’re not fully developed, or dependent on others for survival, or inconvenient, or unwanted by their mothers, or imperfect, we shouldn’t be surprised that we deny post-natal children either mothers or fathers, or that we place them in homes to be raised by people in profoundly immoral relationships, or that we allow minors to be surgically mutilated and chemically sterilized. We don’t value human lives—particularly voiceless human lives. And we’re not civilized. When we dehumanize humans in the womb, we dehumanize ourselves. Every year, thousands upon thousands of women choose to have their babies killed, claiming they could never give a child up for adoption. While allowing their child life in the care of another is too painful, killing them is not.

Irish journalist and playwright John Waters offers this epitaph for the spiritual death of Ireland that this decision and the grotesque celebration of it signify:

For the first time in history, a nation has voted to strip the right to life from the unborn…. This is the considered verdict of the Irish people, not—as elsewhere—an edict of the elites, imposed by parliamentary decree or judicial fiat. The Irish people are now the happy ones who dash their own children against the rocks…. May 25 will go down as the beginning of the final stage of the disintegration: the carting of the human in Ireland from the spiritual to the material level, with the country that was once the jewel in the crown of European Christianity affirming that a baby is the mere chattel of her mother.

Most within the human sacrifice industry continue to tug on heart strings by exploiting human suffering narratives. They appeal to emotions by focusing on babies who will be born with conditions that will cause them and their families incalculable suffering, while ignoring any discussion of whether murder is ever the ethical response to human suffering. They don’t want to discuss why the dependency-status, absence of their mothers’ desire, incomplete development, or imperfections of little humans grants other humans the right to kill them.

But not all advocates of the choice to kill pursue the emotional exploitation tactic. Increasing numbers of women display their now-seared consciences, going instead for piteously cold, calculating, self-serving appeals—the kind Pollitt recommends. That’s what we witnessed in the ghoulish responses from women in Ireland.

#ShoutYourAbortion
b
a
x
r