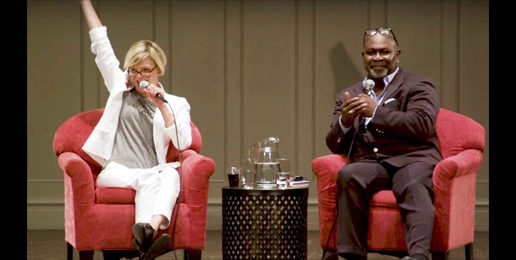 The minds of “progressives” have become so darkened, their consciences so seared that they shout about their abortions and unashamedly admit that abortion ends the lives of humans. This week IFI received the following email from a Chicagoan Mary Jennifer Pruim about a billboard we put up that says, “Abortion Takes Human Life”:

Your billboard “Abortions take human lives” is exactly correct. Are there people who don’t know that? Do you think they think there are lemurs, lambs or tadpoles in there? That is exactly the point of abortions- to not add another human to this crowded, polluted earth that we humans have been ruining. Especially poor babies (noting your billboard on the south side of Chicago) with no capable parent in sight, one that will much more likely than not never contribute anything useful, will likely be destitute or even violent, and just add to the chaos we call “humanity”. Abortions across the board should be encouraged and I will continue those efforts.

Surely, Pruim knows that feticide advocates have long tried to promote the science-denying fiction that humans in the womb are not actually human. For years, they called humans in wombs, lumps of tissue, blobs of cells, products of conception, or uterine contents—anything to divert attention from the inconvenient fact that the sexual union of two humans produces a human being, also known as a baby.

Since the South Side is predominantly black, Pruim’s comments about the South Side bear more than a tinge of racism: She refers to babies “that will much more likely than not never contribute anything useful” to society but instead will “likely be destitute or even violent, and just add to the chaos we call ‘humanity.'”

Apparently Pruim believes the poor have no intrinsic right to live. And apparently Pruim is able to predict which humans will become violent. But do those “contributing” humans who managed to survive the treacherous waters of the womb have the right to kill humans whom they—the “contributors”—prophesy will “contribute to the chaos”?

How different are Pruim’s beliefs and goals from those of the Nazi regime who killed children whose lives they deemed “unworthy of life”?

If someone were to think that “progressives” contribute enormously to human suffering and chaos—including by supporting the legalized slaughter of humans in the womb—should they have the right to kill babies in the womb whom they prophesy are likely to become “progressives”?

The obscene views and cold frankness that Pruim’s email revealed were also revealed this week by actress and pro-feticide activist Martha Plimptom who interviewed late-term abortionist Dr. Willie Parker at a “Shout Your Abortion” spectacle in Seattle. In a ghastly display of virtual sociopathy, Plimpton gleefully announced—to loud cheers and applause—that Seattle is special to her because it’s where she had her first abortion:

“Seattle has some particular significance for me for lots of reasons. I’ve got a lot of family here, some of whom are here in the audience tonight. I also had my first abortion here at the Seattle Planned Parenthood. YAAAYYY!

Watch the first 1 ½ minutes to see this unsettling display of a malformed conscience:

I give the facts, not alternative facts…. [The ‘antis’] say abortion is murder… but murder is a legal definition. In order to murder someone, they [sic] have to be a person. A fetus is not a person…. Personhood is conferred at birth.

To what “fact” is Parker referring when he says, “a fetus is not a person”? It may be a fact that under the law, a fetus is not considered a “person,” but that’s not a scientific fact or a moral truth.

When asked a question about late-term abortions, Parker said this:

Well, a pregnancy never is or looks like a baby, so that’s a silly statement. But the soft, fleshy objects in wombs with heads, torsos, wiggly arms and legs, and valuable internal organs (much prized by 21st Century body snatchers) that were the result of sexual intercourse between two humans of opposite sexes and have unique human DNA are actually human babies. And Dr. Parker has killed many of them.