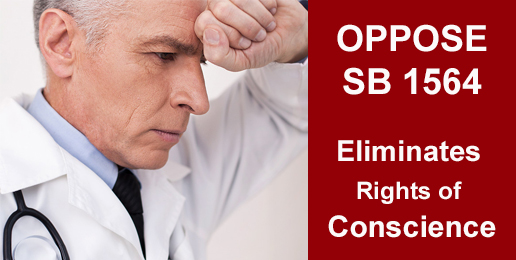 SB 1564 undermines the freedom
of conscience and invites intimidation and
legal action against pro-life healthcare providers.

Last year, State Senator Daniel Biss (D-Skokie) introduced SB 1564 to radically alter the Illinois Healthcare Right of Conscience Act.  This proposal was passed by the Illinois Senate on April 22, 2015 by a vote of 34-19. It then moved to the Illinois House where it was picked up by State Representative Robyn Gabel (D-Evanston).

Late in the afternoon of May 25th, the Illinois House debated and passed this ominous new mandate by a vote of 61-54.  (See roll call below.)  The bill now heads to the office of the governor.

Take ACTION:  Click HERE to send a message to Illinois Governor Bruce Rauner to ask him to please uphold religious freedom and conscience rights for medical personnel in Illinois.  Ask him to veto SB 1564 and the tyranny it represents.

You may want to point out that according to the Christian Medical and Dental Associations, 95 percent of physicians in a national poll agreed, “I would rather stop practicing medicine altogether then be forced to violate my conscience.”

It is important to know that SB 1564 will also negatively affect crisis pregnancy centers that provide health care services by requiring that these life centers give referrals to Planned Parenthood or other venues that promote abortion.

(Click HERE to learn more about the problems of SB 1564.) 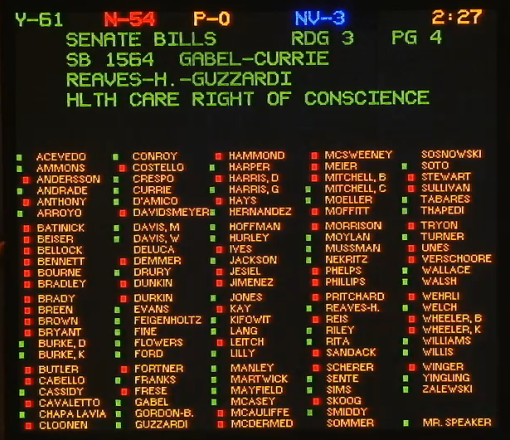