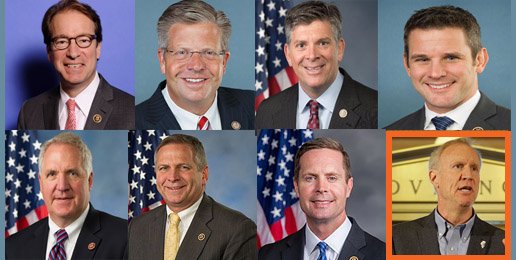 Great news from the congressional front!

In light of the possibility that Governor Bruce Rauner may renege on his commitment to veto HB 40—the bill that would require taxpayer-funding of abortions through Medicaid and state employee insurance plans through the entire 9 months of pregnancies—and the moral gravity of such an obscene (and costly) requirement, Illinois Family Institute Executive Director David Smith sent a letter to Illinois’ Republican congressmen requesting their help in persuading Governor Rauner to veto HB 40.

We are writing to convey our deepest concern about House Bill 40 which has been sent to your desk.

This bill would require taxpayers to subsidize abortions for those covered by Medicaid and for those covered by state employee health insurance through the full nine months of pregnancy. This includes painful late-term abortions, even past the point at which some children could survive outside the womb if given appropriate care.  Under HB 40, there is no cap on the number of abortions that could be covered under Medicaid and no cap on the amount of taxpayer dollars spent on these procedures.  Current estimates of cost to the State range from$1.8 million to $21 million.  While Illinois faces a financial crisis, it is unwise to place such a burden on the taxpayers.

As you have said yourself, this bill wrongfully requires taxpayers to participate in funding abortions. While the political pressure may feel extreme, we respectfully ask you to focus on the underlying issue and not waiver on your commitment to protect taxpayers as well as the most vulnerable members of our community.  We ask you to veto this harmful legislation.

David Smith emphasizes the significance of this letter, particularly in conjunction with the unanimity of opposition to HB 40 among state lawmakers:

I hope and pray other pro-life elected leaders will also speak out. We may not be able to overturn Roe v. Wade yet, but if enough conservatives speak out and overwhelm the governor’s office, we just might protect thousands of babies from the horror of abortion in Illinois.

Though there is a legal right for women to have their offspring killed, such a “right” does not confer on the public an obligation to pay for the deaths of these tiny human beings. In addition, aiding and abetting women in killing their own children is neither just, nor merciful, nor morally defensible.

The dismissively called “social issues” are fundamental cultural issues and crucibles that determine the moral worthiness of a society. Illinois Republican lawmakers deserve our thanks for their support for the lives of humans in the womb.

You can also send Gov. Rauner a message via Twitter: @GovRauner

Bad News for Our Sisters, Daughters and Granddaughters
b
a
x
r