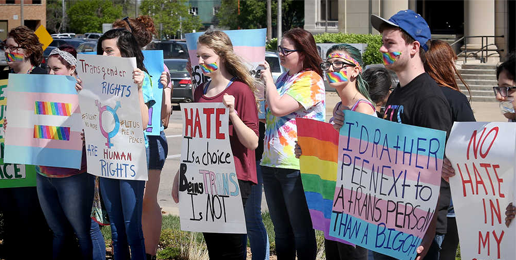 The New York Times reached a new low in silliness, ignorance, and alarmism—or would that be new high—with this headline on Sunday: “‘Transgender’ Could Be Defined Out of Existence Under Trump Administration.” What this silly, ignorant, alarmist headline is referring to is the Trump Administration’s reasonable and increasingly necessary decision to make clear that when Title IX of the Education Amendments of 1972 refers to “sex,” it meant and still means biological sex. Ever-cunning, slippery-as-eels “progressives” at the NYTimes said this:

The Trump administration is considering narrowly defining gender as a biological, immutable condition determined by genitalia at birth, the most drastic move yet in a governmentwide effort to roll back recognition and protections of transgender people under federal civil rights law.

A series of decisions by the Obama administration loosened the legal concept of gender in federal programs, including in education and health care, recognizing gender largely as an individual’s choice and not determined by the sex assigned at birth. The policy prompted fights over bathrooms, dormitories, single-sex programs and other arenas where gender was once seen as a simple concept. Conservatives, especially evangelical Christians, were incensed.

The department argued in its memo that key government agencies needed to adopt an explicit and uniform definition of gender as determined “on a biological basis that is clear, grounded in science, objective and administrable.” The agency’s proposed definition would define sex as either male or female, unchangeable, and determined by the genitals that a person is born with, according to a draft reviewed by The Times. Any dispute about one’s sex would have to be clarified using genetic testing.

Do you see the cunning rhetorical slipperiness? In the good old days when everyone acknowledged the difference between girls and boys, and women and men, “sex” and “gender” were used interchangeably. But no more. “Progressives” relentlessly pontificate that “sex” and “gender” denote wholly different ontological realities, and yet, in this article, the authors keep slipping between the two definitions.

According to “trans” activists and their “progressive” disciples, “sex” refers to an objective, immutable biological reality determined by genes and revealed in anatomy and reproductive processes—pretty much the same as the Trump Administration is proposing to do. In contrast, in our brave new sexually ambiguous, socially constructed, phantasmagorical world, Leftists preach that “gender” denotes the socially constructed roles, conventions, behaviors, and expectations arbitrarily associated with males and females. “Gender identity” denotes the subjective, internal feelings one has about one’s maleness or femaleness, some combination thereof, or rejection of both.

The NYTimes falsely claimed that the Obama Administration “loosened the legal concept of gender in federal programs, including in education and health care, recognizing gender largely as an individual’s choice and not determined by the sex assigned at birth.”

Second, the Obama Administration did not loosen the legal concept of “gender.” The Obama Administration attempted to circumvent Federal law by redefining the term “sex” by edict, proclaiming that in Title IX the term “sex” includes the subjective, internal, non-material experience referred to as “gender identity.” It is long past time that this brazen usurpation of legislative authority be administratively refuted.

Obama’s presumptuous “gender identity” edicts to multiple government agencies, including the departments of Education, Justice, and Housing and Urban Development; the Equal Employment Opportunity Commission; and General Administration Services, are based on the subjective beliefs of “progressives” that biological sex has no meaning or importance relative to feelings of modesty and the desire for privacy that derive from sexual differentiation.

These edicts are based on the non-factual, quasi-religious belief that in private spaces shared by persons unrelated by blood or marriage—including strangers—subjective feelings about one’s maleness or femaleness should supersede objective, immutable biological sex. No explanation is ever provided, however, as to why exactly subjective feelings should trump objective biological sex in determining private space-usage policies.

Leftists argue that the disguises of some passers are so convincing that their presence in the private spaces of same-sex persons will be disturbing. They’re right. If, for example, a woman has transformed her appearance through body-mutilating surgery, cross-sex-hormone-doping and cross-dressing, her presence in women’s facilities will be disturbing. But this raises several issues:

1.) It is a tacit acknowledgement by Leftists that biological sex matters. They base their justification of the use of opposite-sex facilities by “trans”-identifying men and women on their appearance as the sex they wish they were. So, if a man has used surgery and chemicals to create the verisimilitude of a female body, he believes his superficial, medically-constructed material self matters. But if women think biological sex as revealed in unaltered bodily materiality matters and, therefore, don’t want persons who are objectively male in their private spaces, they are deemed hateful, exclusionary, bigoted “transphobes.”

2.) At the same time, arguing that elaborate disguises should grant passers access to opposite-sex private spaces reinforces the very gender stereotypes “progressives” claim are arbitrary and socially constructed. While arguing out of one side of their mouths that “gender” is an arbitrary social construct, they argue out of the other side that these arbitrary social constructs (e.g., liking stereotypical female activities and wearing dresses) are definitive signs of essential femaleness that should grant them carte blanche access to women’s private spaces.

3.) Passing raises the question of whether deceit justifies or legitimizes unethical behavior. In other words, if it’s legitimate, reasonable, and justifiable for men and women to oppose changing clothes or performing bodily functions in the near vicinity of opposite-sex strangers, does disguising one’s biological sex through dress, chemicals, and/or surgery make invasion of someone else’s privacy legitimate, reasonable, and justifiable? If so, is voyeurism ethically justifiable so long as no one knows it’s happening? To be clear, I’m not equating voyeurism to sexual passing. Rather, I’m suggesting that if concealing one’s sex justifies otherwise unethical invasion of privacy, does concealing one’s presence justify otherwise unethical peeping?

4.) Finally, the problem of which facilities passers in really convincing disguises should use is a problem of the Left’s making. It is they who are attempting to socially construct a bizarre alternate reality that pretends the human species is not sexually dimorphic and that men’s and women’s non-material essences can be trapped in opposite-sex bodies. It is they who then exploit the government to try to impose this unreality on everyone, falsely claiming that the sexual integration of private spaces is required by commitments to equality, inclusivity, and compassion. (One foolish devotee of the “trans” superstition recently told me that equality demands that “transwomen” be treated exactly like women. She means that men who pretend to be women should be treated exactly like women, which is the inverse of what equality demands. Equality demands that like things be treated alike.)

Back to the title “‘Transgender’ Could Be Defined Out of Existence Under Trump Administration.” In case the writers haven’t noticed, it was Obama and his accomplices who tried to define “sex” out of existence in Title IX. In making explicit that Title IX says nothing about either “transgender” or  “gender identity,” the Trump Administration does not define out of existence persons who choose to identify as “trans.” What it does is make clear that the term “sex” refers to, denotes, and corresponds to objective, immutable biological sex. Only a leftist could believe that phenomena that have objective existence can be “defined out of existence”—you know, like claiming “women can have penises” or that “transwomen are women.”