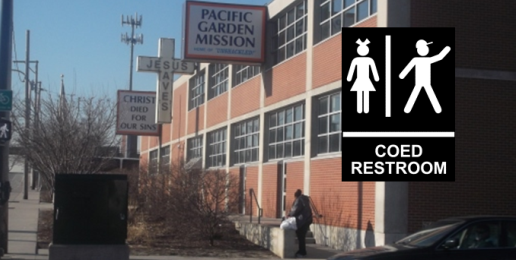 The most radical cultural revolution in modern history is taking place, fomented and facilitated by Barack Obama’s egregious abuse of power. He is incrementally obliterating any public recognition of and respect for sexual differentiation. In Obama’s brave new world, immutable biological sex will be rendered meaningless.

Last week, reports surfaced that both the Department of Housing and Urban Development (HUD) and the General Administrative Services (GSA) have issued “guidelines” or regulations essentially mandating that those government organizations and institutions that fall under the purview of these agencies must treat humans as if their intrinsic, objective, immutable biological sex has no meaning, not even in the most private and intimate contexts.

Department of Housing and Urban Development

In 2012, HUD published its “Equal Access to Housing in HUD Programs Regardless of Sexual Orientation or Gender Identity final rule,” which stated that “Inquiries as to sex are permitted…when determining eligibility for a temporary, emergency shelter that is limited to one sex because it has shared sleeping areas and/or bathrooms.”

A new document was published in February 2015 which reverses that position:

This policy change means that any shelter that receives government funding may no longer take into account the sex of persons when assigning them to single-sex accommodations. In order to receive government funds, shelters must house men and women in accordance with the sex they wish they were or claim to be rather than the sex they actually are.

Shelters—like the 200 shelters run by Catholic Charities—will be prohibited from asking anyone seeking emergency shelter in single-sex accommodations about their sex. All that’s required for men to access women’s shelters where abused and traumatized women are often housed is the claim by men that they “identify”—whatever that means—as women.

According to the Washington political newspaper The Hill, this new “guidance” will be finalized in September.

Just days after the HUD news came out, news broke that the GSA will be requiring all restrooms in the 9,000 buildings and offices it oversees, including “federal courthouses…the Social Security Administration and the Department of Veterans Affairs,” to be co-ed. This new regulation will apply to both federal employees who work in those government buildings as well as all visitors. According to GSA officials, this regulation “is based on a review of recent rulings and directives from the Departments of Education and Justice and the Equal Employment Opportunity Commission.”

And so, the ideological collusion comes to light.

The Departments of Justice and Education

Obama’s GSA is basing its decision on Obama’s Department of Justice (DOJ) and on Obama’s Department of Education (ED), both of which divined and declared that the word “sex” in Title VII of the Civil Rights Act of 1964 and Title IX of the Education Amendment of 1972 respectively didn’t actually mean sex but instead meant sex and “gender identity.”

For those who may have forgotten, it was Obama’s radical attorney general Loretta Lynch who proclaimed that separate restrooms for men and women are analogous to separate restrooms for blacks and whites. (I assume, therefore, that Lynch refuses to use women’s restrooms as an act of civil disobedience against unjust discriminatory practices. Come to think of it, what a paltry act of defiance using the men’s restroom would constitute in the face of such a grave social evil. Lynch should be showering with men in the Capitol Hill health club to demonstrate her commitment to “inclusivity, diversity, compassion and open-mindedness” and her solidarity with oppressed men who wish they were women.)

The ED is similarly abusing its power by requiring all minor children and college students in government schools to share restrooms, locker rooms, dorm rooms, and hotel rooms for school-sponsored overnight trips with persons of the opposite sex.

The Equal Employment Opportunity Commission (EEOC) also plays a role in this toxic ideological potage. Lesbian Chai Feldblum, Obama’s recess appointment to the EEOC, was instrumental in redefining the word “sex” for the purposes of advancing sexual deviance in the EEOC case Macy v. Holder. In 2010, “Mia” Macy, a male police detective who pretends to be a woman, applied for a job with the Bureau of Alcohol, Tobacco, Firearms and Explosives. He was turned down and filed a complaint with the EEOC which found in his favor:

More recently, in a landmark case, the “EEOC as an agency of the federal government, sued a private business on behalf” of a man who pretends to be a woman. Fortunately, in a rare instance of judicial sanity, a judge ruled against “Aimee” Stephens who sued the private funeral home that fired him. The judge ruled that “Enforcement of Title VII ‘would impose a substantial burden on [the funeral home’s] ability to conduct business in accordance with its sincerely-held religious beliefs.’”

So, Obama has used the Department of Justice, the Department of Education, the Department of Housing and Urban Development, the General Services Administration, and the Equal Employment Opportunity Commission to advance his radical, anti-science social and political revolution. The expansion of the federal government into the behemoth it has become has made this revolution possible. This expansive, intrusive, coercive federal monster now demands that all Americans treat biological sex as if it has no meaning. Bureaucrats are forcing all Americans—including children—to treat gender-dysphoric, sex-rejecting persons as if they are, in reality, the sex they wish they were as opposed to the sex they actually are.

What next? Force us to pretend the world is flat?

Take ACTION:  Click HERE to send a message to your U.S. Representative, urging him or her to rein in the un-elected, leftist federal bureaucrats who are putting our family members in uncomfortable and dangerous situations.

Demand that they take action to stop to the federal takeover of shelters, restrooms, and locker rooms.

You can also place a phone call to your federal lawmaker via the United States Capitol switchboard by calling (202) 224-3121.

We are excited to have as our keynote speaker this year, former Congresswoman and Tea Party Caucus Leader, Michele Bachmann!  She distinguished herself by not only forming and chairing the Tea Party Caucus in 2010 in the U.S. House but also through her courageous and outspoken pro-life leadership as attested to by her rating of zero from NARAL.