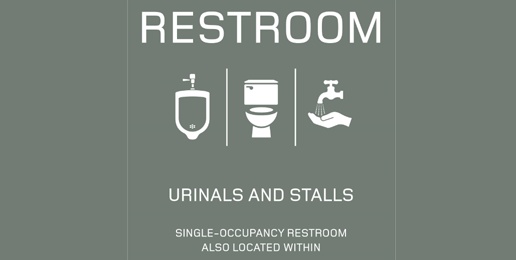 Well, now, that didn’t take long. Yesterday, I warned about the dystopian cultural landscape that the sexual subversives among us are pursuing with unholy fervor and at breakneck speed. They seek to end all public recognition and accommodation of sex differences. I clearly didn’t issue my warning early enough.

Sexual revolutionaries drunk with anti-cultural power, aided and abetted by bootlicking government and business leaders, are successfully eliminating public recognition of the value and meaning of sex differences. At Manhattan’s uber-regressive Cooper Union College, they’ve leaped ahead a step or two. Rather than allow just gender-confused students and faculty to use opposite-sex restrooms, the Cooper Union administration decided, what the heck, just let everyone use any facility his, her or zir heart’s desire. All sex-segregated restrooms are gone. Nary a one left. Interim president Bill Mea offered this bizarre defense:

When there’s a gendered space, there’s a sense of ownership to that space….When people see someone who [sic] they think doesn’t belong there, it can create stress for everyone. So we thought, let’s just take that away.

Oddly, in the olden days when restrooms corresponded to one’s objective sex rather than subjective feelings about one’s objective sex, I never felt I “owned” restrooms. I didn’t feel I owned women’s restrooms in stores, malls, health clubs, schools, or movie theaters. I used them.

And I’m pretty sure that giving all men free rein to use women’s restrooms is not going to decrease women’s stress.

Mea is correct, however, I did believe some people didn’t belong in the women’s restrooms I used: objectively male people. Still do, as a matter of fact. I “feel” that the objective sex of people matters. It has meaning and value and is the source of feelings of modesty and desires for privacy. I don’t want to be forced to use restrooms, dressing rooms, or showers with those whose sex I don’t share. I don’t think other women or men should be either.

Young’uns, you may not know this, but in the backward, hateful gendered days of yore when objective, immutable sex differences meant something, these restrooms corresponded to (TRIGGER WARNING!) male, female, and faculty respectively (I wonder how many male faculty members will be using the “stalls only” restrooms).

This is coming everywhere, my friends. Culture-destroying movements always start on the fringy edges of society where the feckless live and move and have their being. And then they begin their march to the center.

I’ve said it before and I’ll say it again, it’s time to get those dusty spines out of the attic. Stop all that stooping and groveling at the altar of sexual deviance and irrationality. Stand tall. Be courageous. Speak and act as if you believe your beliefs are in reality true. If you know that being created as male or female has profound meaning, then do something about it.

Join us this Friday (April 8th) in Orland Park for yet another IFI Forum, this time exploring The Case Against Common Core with Dr. Duke Pesta.  Click HERE for more information.

There Is No Conservative Case For Genderless Bathrooms