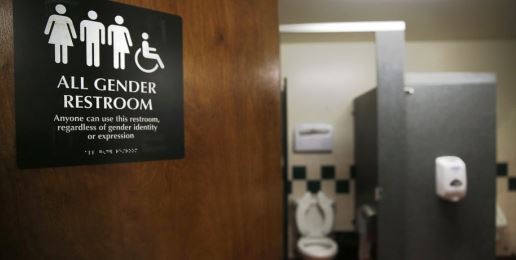 There Is No Conservative Case For Genderless Bathrooms
Written By   |   12.30.16
PRINT

Our good friends over at National Review Online recently presented what they say is a conservative case for opening up public restrooms and locker rooms to either sex. Although written by an incredibly smart man—Josh Gelernter—the article seems to miss the nature of the issue itself, and by some margin.

His lead-off was not surprising: Conservatives should be cool with transgender folks doing what they want because “conservatism is the mind-your-own-business ideology.” He calls to the stand Kentucky Gov. Matt Bevin, who desires that their legislature not consider a trans-bathroom protection bill because “the last thing we need is more government rules.” Putting aside that this feels more like the desire to avoid a nuclear hot potato masquerading as a principled stand, let’s consider the veracity of this line of thought.

First, both rationales are faulty to a fault. Second, Gelernter ricochets quickly from these into endeavoring to show how inadequate the concerns over gender-free bathroom and locker room policies are. It’s easy when you reduce the whole thing down to “It will let predators in” as the primary concern. This is naïve.

Let’s address the “mind-your-own-business” part first. That is not conservatism. It’s a muscular libertarianism. Good conservatives are more than comfortable telling people they shouldn’t do certain things, and have been for quite some time.

The faithful conservative resists all kinds of behaviors: being a communist, sexual libertinism, creating broken families, not carrying one’s weight, not taking personal responsibility, etc. It’s not conservatives who sport “Don’t Like Abortion? Don’t Have One” bumper stickers on their cars. Conservatism is more like “Work Hard, Be Responsible, and the Newest Ideas Are Not Usually the Best Ideas.” Conservatives conserve. This means conserving the idea that male and female are not subjective feelings, and when opening and removing their clothes outside the doors of their own homes, the sexes should be segregated.

Next, the “we don’t need more government rules” line fails to understand the politics and genesis of this issue. It assumes gender-free restrooms and lockers have always been the rule, and some people now want to come along and put regulations on it. This is not the case, of course. Creating gender-free facilities requires new government rules. This is what the whole thing has been about: municipalities, retailers, and our president telling us we will accept their new regulations…and like it. We were minding our own business and would like for it to have stayed that way.

This Is about Men Seeing Naked Women Without Consent

This brings us to the last point: Gelernter’s simplistic dismissal of those who have concerns about gender-free facilities. To him, the possibility of predators is anyone’s only concern here.

Women and fathers of daughters know this is not the case. It has to do with the inherent (and higher-order) modesty of women and their protection from the male gaze. He fails to appreciate that according to the rules of transgender politics, these policies mean any person could enter any bathroom, changing room, or locker room and freely do and observe what is done in such places. Anyone.

There is no criteria—medical, legal, physical, or psychological—anyone must meet to be accepted as officially transgender. It is solely up to the person making the claim, and no one can question him or her about it.

Well, many assume, don’t they have to look like the other sex, or at least be trying to do so? Gender orthodoxy demands that no one should have to live by someone else’s assumption of what a man, woman, or any of the other supposed genders looks like or does. They are merely restrictive social constructions enforced by male power that must be cast off.

Thus, the central concern here is that these new policies require that every woman and girl get used to having men invade their male-free sanctuary and violate their naturally strong sense of modesty by simply being present there.

Ask the typical male if he would mind a woman using the men’s locker room. Ask a woman if she would mind a man doing so. It is precisely here that the issue lies. No one has the liberty to violate the modesty of a woman. A good society conserves this important and fundamental human value at all costs. This is the work of the conservative.

This article was originally posted at TheFederalist.com

No-Stress Restrooms at New York College
b
a
x
r