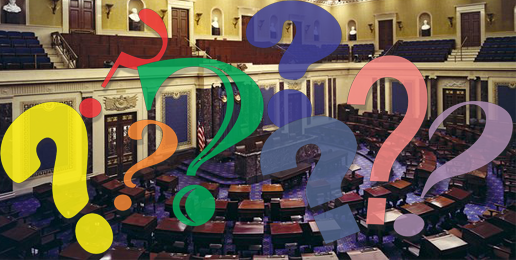 The radical “Equality” Act—the pet project of sex-eradicationists (also known as “trans”-cultists)—is now in the U.S. Senate. The act would force the federal government to treat the nonsensical notion that spirit humans can be “trapped” in the wrong material bodies as if those disordered feelings constitute a reality equivalent to biological sex and one about which no one may make judgments. In other words, the Equality Act would enshrine in federal law a Gnostic superstition.

In addition, when the purported rights of cross-sex impersonators clash with First Amendment protection of the free exercise of religion, the Equality Act says cross-sex impersonation wins. Buh-bye Christian colleges whose students get federal aid. Buh-bye Christian adoption agencies that partner with the government. Buh-bye religious liberty. It was nice knowing you these past glorious 230 years.

If passed, “trans”-cultists will be well over halfway to their goal of eradicating all public recognition of biological sex. There are many reasons we have arrived at this insane, reality-denying, wrong-side-of-history moment, including the fact that citizens are not demanding their elected leaders dialogue on and debate the sandy foundation on which the “trans” cult is built. In the hope that sane people on the political right and left will start demanding such conversations, here is a list of questions that every lawmaker, school administrator, and school board member should have to answer:

1.) If sex and “gender” are two wholly different and unrelated things, with sex being an immutable objective phenomenon and “gender” being a subjective, internal, and sometimes fluid phenomenon, why should restrooms, locker rooms, shelters, prisons, nursing home rooms, and semi-private hospital rooms correspond to “gender identity” as opposed to biological sex which is both objective and stable?

3.) Either biological sex has meaning relative to feelings of modesty and the desire for privacy when undressing or engaging in intimate personal acts, or it has no meaning relative to modesty and privacy. If biological sex has no meaning relative to modesty and privacy, why do we have any sex-segregated restrooms or locker rooms anywhere? Why not make all of them co-ed for everyone? If, however, the desire of humans to be segregated from unrelated persons of the opposite sex when undressing, showering, or going to the bathroom is natural, understandable, reasonable, and good, why should some opposite-sex persons be allowed to violate those spaces just because they don’t like their sex?

7.) Will school administrations allow those who identify as gender-fluid to choose daily which restrooms and locker rooms they will use? If not, why not?

8.) Should other subjective, internal feelings be reflected in policy and practice? For example, should those who identify as amputees (i.e., those with Body Integrity Identity Disorder) be allowed to use wheelchairs and handicapped parking spots at school? Should they be allowed to leave class early to have more time to get from one class to another?

9.) Is it unnatural or pathological for girls or boys to object to engaging in excretory functions in a stall next to an unrelated person of the opposite sex doing likewise? If not, should schools respect and honor those feelings through policy that prohibits co-ed restrooms?

10.) Those who identify as “trans” claim their biological sex as revealed in anatomy is unrelated and irrelevant to their “gender identity” (which is a subjective, internal feeling) and that anatomy doesn’t matter when it comes to restrooms, changing areas, and showers. They further claim they want to use restrooms with only those whose “gender identity” they share. So, why do boys who identify as girls demand to use girls’ restrooms and locker rooms? How do they know the males using the boys’ restrooms do not “identify” as girls, and how can they be sure that the females using the girls’ restrooms do “identify” as girls? Is it possible that boys who identify as girls are basing their restroom/locker room choices on biological sex (i.e., the female sex) as revealed in anatomy? If so, why are they permitted to do so but objectively female students are not?

13.) Do children and adults have an inalienable and intrinsic right not to share restrooms and locker rooms with persons of the opposite sex?

16.) Leftists argue that separate restrooms and locker rooms for boys and girls are equivalent to separate drinking fountains for blacks and whites. Others would counter that while there are no substantive ontological differences between whites and blacks and that there are no differences that bear on drinking water at fountains, there are substantive differences between men and women. In fact, even homosexuals acknowledge that men and women are fundamentally and significantly different when they say they are romantically and erotically attracted to only persons of their same sex. Further, conservatives argue that the differences between men and women bear directly on the use of spaces in which private activities related to physical embodiment are engaged in. It is these important differences related to physical embodiment as male or female that account for the very existence of separate restrooms, locker rooms, shelters, and semi-private hospital rooms for men and women everywhere. If, however, separate restrooms and locker rooms for men and women are akin to separate drinking fountains for blacks and white as Leftists claim they are, are Leftists in favor of banning them everywhere?

20.) Pronouns denote and correspond to objective biological sex—not subjective, internal feelings about one’s sex. So, if staff members, teachers, administrators, or students view the use of opposite-sex pronouns to refer to gender-dysphoric students as lying and for ethical, and/or religious reasons they object to lying, should schools accommodate their objections? Or, should schools—which are arms of the government—compel employees to lie?

21.) Liberal sex and gender researchers Michael Bailey at Northwestern University and Dr. Eric Vilain at UCLA write that 80% of gender-dysphoric boys—and most gender-dysphoric persons are male—will accept their real sex by adulthood. They claim that “it looks like parental acquiescence leads to persistence.” In other words, if parents accommodate their children’s efforts to pretend to be the opposite sex, their children are more likely to persist in their rejection of their sex. Are schools that allow gender-dysphoric minors to use opposite-sex restrooms and locker rooms complicit in helping students persist in their rejection of their sex?

22.) If there is a mismatch between a person’s sex and his feelings about his sex, how can “progressives” be certain that the error resides in the healthy body rather than the mind? If a person has normal, unambiguous, healthy, fully functioning male anatomy but desires to be—or believes he is—female, might this not be an error or disorder of his mind?

23.) If a man “identifies” as “bi-gender” and has appended faux-breasts to his chest while retaining his penis and testes, as many cross-sex identifiers do, should he be to walk about unclothed in women’s locker rooms?

25.) Some argue that men masquerading as women have been successfully using women’s private spaces for years without women knowing and hence no harm, no foul. This suggests that if women’s privacy is invaded by men but they—the women—are unaware of the invasion, no harm has been done. By that logic, if voyeurs (not to be confused with men who “identify” as women) are able to secretly view women without women’s knowledge, have women been harmed or not?

27.) When law enforcement agencies collect and disseminate information on crime, should crimes committed by biological men who pretend to be women be recorded as acts committed by men or by women?

28.) Should government contracts allocated for women business-owners be awarded to biological women only or also to biological men who “identify” as women?

29.) How will biomedical research into health issues that affect primarily women or primarily men be affected when the recognition of sexual differentiation is prohibited?

My hope is that these questions might help jumpstart a spirited conversation and perhaps help eradicate the pernicious and absurd “trans” ideology.

There Is No Conservative Case For Genderless Bathrooms

No-Stress Restrooms at New York College
b
a
x
r