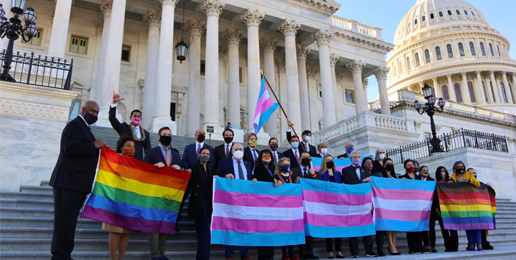 How can someone as foolish and manipulative as U.S. Representative Marie Newman get elected to Congress? Oh, yeah, she ran in Illinois, the land that once gave the nation Abe Lincoln but now saddles the nation with Dick Durbin, Tammy Duckworth, Jan Schakowsky, Sean Casten, and Brad Schneider.

On March 17 Newman, the anti-life, self-identifying Catholic, spoke in a U.S. Senate hearing in support of the execrable Equality Act, which has nothing to do with Equality and everything to do with advancing an alchemical superstition about the alleged ability of humans to become the opposite sex through desire, cross-dressing, hormone-doping, and mutilating cosmetic surgery.

She did what “progressives” do best. Rather than make a cogent, rational argument based on reason and evidence, she instead tried to manipulate feelings through a personal “narrative.” She told the sad tale of her troubled teenage son who now pretends to be a woman. Unfortunately, since she chose to exploit her son’s problems on the national stage in order to pass legislation that will affect the entire nation, others have a right to respond.

Newman began her exploitative sermonette by making this remarkable claim, the ramifications of which she clearly has not thought through:

The most important thing in life is to be authentic. I think we all understand that. … Imagine if I asked any of you … on the committee today to simply try being someone you absolutely are not … To try to be something that you are not every day is very difficult. Do this for a week, a month, a year and I guarantee you will feel deep depression, great anxiety, and yes, even suicidal.

Newman neglected to define “authentic.” The American Heritage Dictionary defines “authentic” as “conforming to fact and therefore worthy of trust, reliance, and belief.” As such, a man seeking to pass as a woman is the antithesis of authenticity.

Perhaps Newman believes an “authentic” life means living in accordance with deeply held beliefs. If so, then she should understand that for theologically orthodox Christians, Jews, and Muslims living an authentic life precludes treating humans as if they are the sex they are not. In other words, the Equality Act would compel many Americans to live inauthentic lives. It would compel them to participate in a destructive lie.

From the context, however, it appears Newman links authenticity to living a life of bondage to unchosen, powerful, and persistent desires, no matter how disordered, irrational, or delusional. To Newman being “authentic” appears to refer to yielding to desires that impel artificially induced cessation of natural biological processes and surgical mutilation of healthy, properly functioning parts of sexual anatomy.

Applying consistently Newman’s definition of an “authentic” life would mean that those who experience an unchosen, powerful, and persistent desire to be an amputee (i.e., those with Body Integrity Identity Disorder) should be treated as if they are amputees even if they are equipped with fully functioning, healthy limbs.

And those who experience unchosen, powerful, persistent sexual attraction to children should not be prohibited from acting on those desires, for trying to be someone they are not will—Newman guarantees—result in deep depression, great anxiety, and suicidal ideation.

Newman arrogantly presumed that everyone on the committee understands that “the most important thing in life is to be authentic”—as she understands authenticity. Perhaps, however, some on this U.S. Senate Judiciary Committee—for example, Marsha Blackburn, Vicki Hartzler, or James Lankford—believe an authentic life means living in a way that corresponds to material reality or to Scripture. To many people, living an authentic life requires denying their desires daily.

Continuing in her presumption about what everyone knows, Newman said,

[W]e already have freedom of religion in our Constitution, and this act does not discriminate against religion, as we all know.

Actually, lawmakers in thrall to the “trans” cult stripped the Equality Act of religious protections, and numerous legal scholars have warned that the passage of the Equality Act poses the most significant threat to constitutional protections of the free exercise of religion ever in America’s history. Newman is either outright lying or indefensibly ignorant.

Mary Hasson, graduate of Notre Dame Law School and fellow at the Ethics and Public Policy Center in Washington, D.C., testified at this same hearing. She made clear what Newman tried to obscure:

The Equality Act threatens serious harm to religious believers and religious organizations, stripping away crucial protections afforded under the Religious Freedom Restoration Act—a law enacted in 1993 with overwhelming, bipartisan support. The Equality Act attacks First Amendment rights as well, inserting language that attempts to tip the scales against believers if they assert claims under the First Amendment or Equal Protection.

The Equality Act reaches far beyond Bostock (which pertained to workplace discrimination) by expanding “public accommodations” to permit discrimination claims wherever Americans “gather,” even virtually. The result? Churches, synagogues, temples, faith-based schools, soup kitchens, and shelters for battered women will be subject to government coercion pressuring them to compromise their religious beliefs or risk endless litigation.

Recipients of federal funds, including houses of worship, religious schools and other faith-based organizations are litigation targets under the Equality Act as well—even for something as simple as maintaining sex-segregated bathrooms. This means a Muslim food bank, Catholic homeless shelter, or Christian center for female survivors of domestic violence will be punished for doing good while following their religious teachings.

Similarly, any private school that enrolls students who receive Pell grants or who participate in school lunch programs are subject to the Equality Act’s sex discrimination provisions. Urban Catholic schools, for example, which provide life-changing education to low-income children would face an untenable choice: violate their deeply held religious beliefs about human nature, sexual difference, and marriage or close their doors to students who rely on federal help. Adoption and foster care programs run by religious believers who desire to serve the most vulnerable are also at risk.

Newman sneakily perpetuated the lie that minor children who experience gender dysphoria will commit suicide unless they “transition”—a euphemism for pretending to be the opposite sex. No one can “transition” from one sex to the other. Newman said,

More than five years ago, before she [sic] had transitioned, my daughter [sic], at just 14 years old had experienced deep depression and anxiety. Unable to identify the cause of her [sic] pain, she [sic] told her [sic] parents that the only two solutions she [sic] felt would solve it was either suicide or running away.

Newman’s son may have felt despair—he may have felt the only solutions were suicide or running away—but his feelings do not mean he was born in the wrong body. Many teens feel despair for many reasons. And now it’s becoming increasingly difficult for teens to access counseling that can help them uncover those reasons.

In addition, there is much mis- and dis- information about suicide and gender dysphoric children circulated eagerly by the “trans”-cult and its ideological allies—misinformation/disinformation that has been dispelled by medical experts who lack the cultural imprimatur and reach of “trans”-cultists. Newman and other members of Congress might do less societal harm if they would read more widely.

It appears Newman may have gotten her son tangled up in one of the many “therapeutic” programs that are, in reality, profiteering “trans”-advocacy programs staffed with activists who couldn’t identify mental health if it slapped them upside their indoctrinated noggins:

[W]e enrolled in a local day therapy program. One night after her [sic] program, my daughter [sic] perked up in her [sic] chair at the dinner table, excited to share some news. She [sic] told us she [sic] had figured it out. “Mom, I’m not a boy. I’m a girl, and my name is Evie Newman.” Everything had clicked at that moment. She [sic] had been pretending to be something she wasn’t. She [sic] wasn’t being authentic, and as we all know, it is the hardest thing in the world to pretend every day. It was the happiest day of our lives.

Newman’s son was not pretending to be a boy prior to the night he made his sudden perky announcement. He always was a boy and remains in perpetuity a boy.

Newman argues that the Equality Act will merely afford her son “civil rights” of which he is currently deprived:

Signing the Equality Act into law. … will ensure that Americans like my daughter [sic] are afforded the same civil rights already extended to every other American across the nation. … We’re not asking for anything special or different, equality and nothing more. No American should have to live a lie.

Baloney. Is Newman arguing that her son is currently denied the right to vote, assemble, speak, exercise his religion freely, own a gun, petition the government, or get a fair trial?

The irony is rich in her claim that “No American should have to live a lie” as she argues for a bill that will compel all Americans to live the lie she and her family are choosing to live.

Demanding that a condition constituted by desire and volitional acts that many view as immoral be treated like objective conditions with no behavioral features like, for example, race or biological sex is, indeed, asking for something special and different.

The irony continues in her statement about religion and sports:

Newman absurdly described the desire of theologically orthodox Christians to live authentic Christian lives when they refuse to affirm a deceit as “weaponizing religion.” And she described the desire of authentic girls not to be forced to compete athletically against biological males who impersonate females as a “weaponized red herring.” In Newman’s view, only the affirmation of “trans”-cultic beliefs and practices can be authentic.

Nearing the end of her Oprah-esque testimony, she almost spoke some sense. She began,

Truth is real and should be a part of this [Equality] act.

Then she had to go and ruin it by making yet another patently false claim:

Nope, there is no truth about sex, civil rights, or equality in the Equality Act.

It’s astonishing that the most powerful nation in the world has leaders whose ethical philosophy hasn’t advanced beyond that of a heathen adolescent.