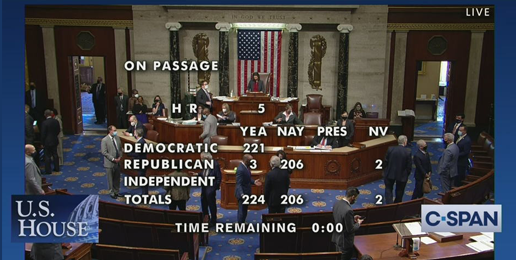 On Thursday afternoon (2/25/2021), the U.S. House of Representatives voted 224 to 206 to pass the so-called “Equality Act” (H.R. 5), which would enshrine “sexual orientation” (i.e., homosexuality) and “gender identity” (i.e., cross-sex identification) as legally protected classes in a myriad of federal laws. The vote fell along party lines, with only three Republicans (U.S. Reps. Brian Fitzpatrick of Pennsylvania, John Katko of New York, and Tom Reed of New York) voting with the Democratic majority, and two Republicans not voting.

Take ACTION:  The measure now proceeds to the U.S. Senate where the potential outcome remains uncertain. Click HERE to send a message to our U.S. Senators Dick Durbin and Tammy Duckworth to urge them to oppose the federal Equality Act (H.R. 5) which seeks to amend the Civil Rights Act of 1964 to include protections for an individual’s perceived sex, “sexual orientation,” or “gender identity.”

To be clear, H.R. 5 would remove significant rights and opportunities from many in our communities:

We believe every human being is created in the image and likeness of Almighty God, and therefore deserves to be treated with dignity and respect. Using the heavy hand of government, however, to force good people to deny biological realities and to compromise their religious convictions is not the answer.

Speak up now before it is too late.

To understand more about the widespread harms the passage of H.R. 5 would have on our nation, see IFI recent Action Alert and the host of helpful resources from our friends at Alliance Defending Freedom.

National and State Leaders’ Letter to Leader McConnell on H.R. 8404
b
a
x
r