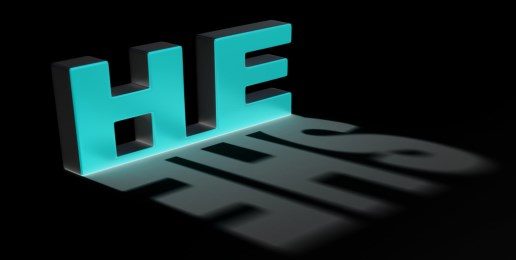 We buy and sell children as commodities through egg and sperm donations. We legally allow imperfect, inconvenient, or unwanted children to be killed in the womb. And we permit confused children to be chemically and surgically altered in a grotesque and barbaric science-denying social experiment. The harm done to children in contemporary America is incomprehensible.

On Monday, the Chicago Tribune ran a guest essay written by Tucker Fitzgerald, the deceived father of a six-year-old gender-dysphoric boy who is being permitted to pretend he’s objectively female. This boy is permitted to wear dresses and use girl’s restrooms. Fitzgerald wants his son to be able to continue this restroom practice, foolishly writing, “[W]hen confronted with trusting her [sic] heart and mind, or trusting her [sic] genitals, I chose her [sic] heart and mind.” What “heart and mind” refers to are feelings and thoughts, desires and ideas.

In a culture less fearful of the power of the pro-sexual-deviance lobby and the organizations (e.g., professional mental health organizations) shaped more by this lobby’s ideology than hard science, people would be asking this question: If a person wishes to be the sex opposite from his or her actual sex, is it more likely that the error is with the person’s healthy, well-functioning body or the person’s “heart and mind”?

Fitzgerald then moves on to the purported risks for women if or when de facto co-ed restrooms become the law of the land as he would like. He presents an astonishingly ironic and convoluted argument to defend “gender-identity-based” restrooms policies over what he reductively calls “genital-based restroom laws.” He argues that restroom policies that require people to use restrooms that correspond to their sex make sexual assaults of women more likely. How’s that, you may reasonably ask.

This is a win-win for Leftists. Either way, they will get co-ed restrooms. They will either get their sex-obliterating policies that allow fake-women (i.e., actual men) to invade opposite-sex restrooms, or we will retain “genital-based” restroom policies that require burly fake-men (i.e., actual women) to use women’s restrooms, which will make actual women uncomfortable and will result in actual men-predators who look just like burly fake-men easily accessing women’s restrooms. No need for the man-predator even to cross-dress. Got that?

So, let’s make this quagmire a tad more quaggy and miry. In challenging current “genital-based” restroom policies,  Fitzgerald asks, “[W]ho is going to do genital inspections?” Let’s assume sexuality-perverts (i.e., those who seek to pervert a proper understanding of all matters sexual) manage to win “gender-identity-based” restroom policies. Who is going to do “gender-identity” inspections? What will society do with the genderfluid, bigender, and trigender among us? What is required to establish a “transwoman” or “transman” identity? Must they cross-dress? Take puberty-blockers? Take cross-sex hormones? Have their breasts amputated and fake-penises affixed to their nether regions or conversely have their penises amputated and fake breasts affixed upstairs?

Fitzgerald conveniently omits discussion of locker rooms. Should locker rooms be “gender-identity”-based rather than “genital-based”? Hmmm, what to do, what to do about those pesky penises in women’s locker rooms? Should young girls have to see the naked bodies of gender-dysphoric boys with penises? Should they have to be seen naked by these boys? Should women and teenage girls have to see the naked body of the man who identified as a woman and who is attracted to females as happened in a Washington state health club?

What’s clear is that this foul mess of assaults on privacy, modesty, safety, and the nature and meaning of biological sex lays squarely at the feet of LGBTQQ activists and their foolish Leftist ideological accomplices. This tangled web is their execrable creation.

Now that cross-dressing has been released from the confines of closets, and more elaborate disguises are chemically and surgically available, restroom and locker room use has been complicated. Fake-men (i.e., actual women), whose use of cross-sex hormones, body-mutilating surgeries, and cross-dressing render them visually indistinguishable from actual men does complicate restroom use for actual men and for women who won’t want bearded ladies in their facilities. Allowing fake-women (i.e., actual men), whose expensive costume conceals their immutable nature, to use opposite-sex restrooms and locker rooms becomes equally problematic.

The Left lies, telling parents that the inevitable outcome of attempts to help gender-dysphoric children accept their immutable sex is suicide. Despite evidence suggesting that unless adults facilitate the confusion of gender-dysphoric children, the vast majority will come to accept their sex, the Left intentionally terrifies parents into facilitating confusion. In so doing, parents destine their children to lives in which true human flourishing is impossible. Neither the intensity nor depth of love deceived parents feel for their hurting children justifies the harm done to them.

The Left, usually on the really wrong side of history, is perpetrating another pernicious deception on America with children again at the center. I suspect that a century from now, Americans will read in their history books about the gender-dysphoria madness that gripped the nation in the early part of the 21st Century. Future Americans will be aghast and incredulous that Americans could ever have fallen for this bizarre, science-denying superstition and barbaric social science experiment that so harmed the bodies of confused children.