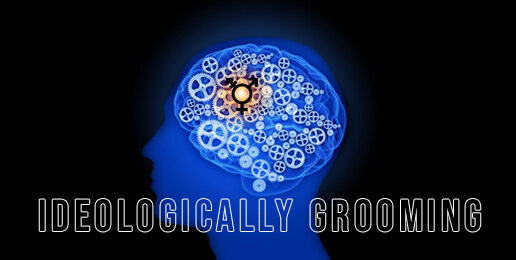 On April 7, 2022, Florida preschool teacher, 28-year-old Lois Schwartz, boasted about teaching her students that she is neither a boy nor a girl and that she’s a polyamorous, pagan witch.

This polyamorous genderfluid witch is a preschool teacher in Florida. She’s so proud of herself that she discusses her gender and sexuality with 4 year olds pic.twitter.com/XOuuX6by4w

“Eli” Dinh, formerly Molly, a kindergarten teacher at the private Hillbrook School in California, uses a pronoun game to inculcate five-year-olds with her arguable, self-serving gender theories. On Instagram she goes by @okayenby, with “enby,” standing for nonbinary. She expects others to refer to her by the third-person plural pronouns “they” and “them.” Dinh is a woman who gave birth and breastfed two children before she decided that her authentic identity was male. Then she started doping testosterone, hired a quack surgeon to lop off her breasts, and changed her name from Molly to Eli. Dinh’s favorite curricular components are, not surprisingly, social and emotional learning and anti-bias education—for kindergartners. Private schools may teach whatever destructive nonsense they want, but Dinh is the cold, sharp tip of a colossal iceberg that is plowing through government schools as well. 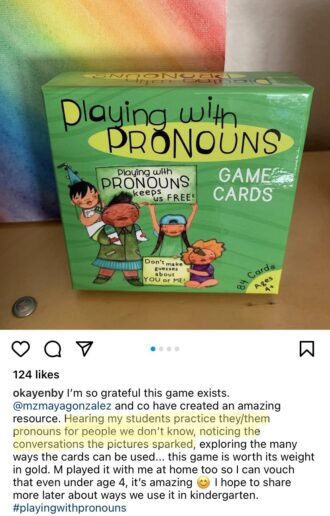 Brooke Charter School first-grade teacher “Ray Skyer,” a bearded woman who pretends to be a man, told K-2 students this hogwash during a zoom class:

Something that’s really cool and unique about me is that I’m transgender. We touched on that earlier this week in the book that Ms. Hammond read, but I’m going to give you my explanation about what it means to be transgender.

So, I’m a man, but when I was baby, the doctors told my parents that I was a girl. … Until I was 18 years old, everyone thought I was a girl. This was super, super uncomfortable for me because I knew that wasn’t right. … So, when I was 18, I told my family and friends that I’m really a boy, and it was like this huge weight had been lifted off of my shoulders, and I had the freedom to be who I truly am.

.@BrookeSchool 1st grade teacher records an “identity share” zoom call with K-2 grades where he spoke about being trans.

“When babies are born the dr looks & makes a guess on whether the baby is a boy or girl. Sometimes the dr is wrong. If they are right, the baby is cisgender” pic.twitter.com/qYGFm9B7rF

This short video teaches parents everything they need to know about morally and intellectually unmoored activists who self-identify as teachers working in schools. First, they propagandize in many ways, including through literature, direct instruction, and demagoguery.

Second, they propagate highly controversial beliefs without telling young students that the “explanations” are controversial, disputed, faith-based, and devoid of scientific support. Doctors don’t “guess” whether babies are boys or girls. They identify the sex of babies. Skyer was correctly identified as the girl she is and ever more will be. Her mother’s obstetrician did not guess, and he or she was not wrong. At 18, Skyer decided to start masquerading as a man.

Skyer did not merely explain. She manipulated the emotions of young innocent children who would not want anyone—especially a teacher they know and like—to feel “super, super uncomfortable.” So, in addition to feeding them fantastical fiction in the guise of objective truth, Skyer is trying to make children feel predisposed to sex-masquerades.

Indefensible ideological grooming of children by leftists is not limited to the United States. Australian Member of Parliament Bernie Finn shared an assignment given to 10-year-old boys and girls in a school in the district he represents. Children were instructed to discuss their father’s erections and ejaculations with their fathers. It should go without saying that at no age should a child be asked to discuss with their fathers their erections and ejaculations. But we are forced to say such things now because purportedly “civilized” societies no longer experience righteous anger at evil being promoted as good to children in school. How long before “civilized” societies no longer find father-daughter personal orgasm discussions objectionable?

Conservative Americans seem—to borrow a British term—gobsmacked by the trans-volution sweeping our formerly rational society. I am gobsmacked by their astonishment. The trans-volution has been slowly emerging like a parasitic guinea worm from the homo-volution which was birthed by the Boomer’s sexual revolution. I first warned about the emerging trans-volution in late 2008 when I wrote about “bisexual” Anglican priest Laurel Dykstra who has twins via a sperm donor. Dyskstra wrote an article in 2005 on how to make preschools “trans-friendly.” Here were her explanations and recommendations:

Dykstra offered these suggestions 17 years ago, and I issued warnings 14 years ago. Increasing numbers of warnings have been issued across the nation by men and women who have been paying attention. The ignorance and sloth of conservatives—including church leaders—in addressing the evil in the midst of our schools is inexcusable.

If Americans had been paying attention to warnings about the perverse shape of things to come, maybe the disaster we see unfolding in schools could have been stopped, thereby preventing the incalculable damage being done to children. But confronting socially acceptable evil requires not just awareness but courage, perseverance, and a willingness to suffer for the neighbors we love.

Identity Politics and Paraphilias: ‘Public Discourse’ Weighs In & Bisexuality
b
a
x
r