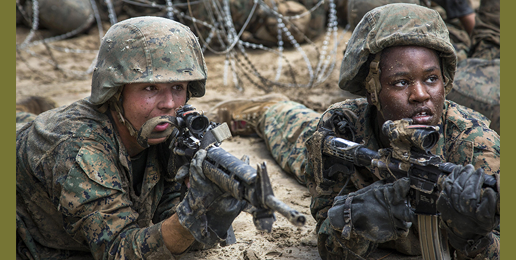 Say No to Forcing Women to Register with the Selective Service
Written By Kristi Shaffer   |   08.13.21
PRINT

Voluntary enlistment in the military provides an honorable career to many individuals, both male and female. With the establishment of the Selective Service Act, obtaining replacement personnel in catastrophic warfare is possible. Traditionally the draft only included young men ages 18-25. The idea of including women in the draft is recurring, first suggested during World War II for conscripting nurses, Congress rejected the plan in 1945. President Jimmy Carter revised the idea in 1980, which again was denied by Congress. In 1981, the U.S. Supreme Court ruled that allowing women in the draft was illegal since women could not serve in combat.

However, women started serving in combat roles in 2015, meaning the U.S. Supreme Court ruling no longer applies. Because this ruling is no longer relevant, some argue that the government can now include women in the Selective Service Act. On July 21st, the U.S. Armed Services Committee passed the U.S. Senate’s National Defense Authorization Act (NDAA) which requires women between 18-25 to register with the Selective Service. If the NDAA bill passes and becomes law, and the draft is one day reinstated, young women would be eligible for the draft.

Women have served voluntarily for decades in non-combat roles. These women deserve respect and honor for the sacrifices made. Mandatory conscription of women, however, is neither honorable nor advisable. The idea of including women in a draft is, at best, an untried and risky experiment.

Women who would be drafted would be forced into an environment fraught with sexual violence. According to the Department of Defense (DoD) in the 2018 Report on Sexual Assault in the Military, a 50 percent increase in women reporting sexual assault between 2016-2018 occurred. The report’s authors also state that only one-third of assaults are disclosed, meaning the rate of assault may be significantly higher. The odds of a woman in the military being sexually assaulted compared to her civilian counterpart are astonishing. The odds of sexual assault for a civilian woman is 1 in 17. Yet, it increases to a 1 in 11 chance for women in the military.

Perhaps most concerning is the possibility of injury. By 2018 over 1,000 female US soldiers were injured in combat. Physical injury, however, is not the only concern. Another concern is mental health. Among all the female soldiers wounded in Iraq or Afghanistan, 40 percent developed mental health conditions. Of those women diagnosed with a mental health illness, 20 percent were explicitly diagnosed with Post Traumatic Stress Disorder (PTSD). Since mandatory conscription is solely for personnel replacement, the assignment of women draftees to combat is likely. Therefore, the probability of women draftees suffering physical or psychological harm is considerable.

The next question is, where would draftees be sent? The enemy in a future conflict is unknown, but the U.S. has several adversaries that are likely candidates, including Muslim extremists who already oppress their own women. Women combatants are at significant risk of horrific treatment if captured by terrorists. Are we willing to send female draftees into a setting where torture occurs at the hands of radicals?

What would a draft mean for women who prefer more traditional roles? Although some women thrive in the environment created by the rigors of the military, many women do not desire service in non-traditional roles. There are still many women who prefer the marriage and motherhood. Some women prefer a career that does not include the physical demands of war. Would women be forced to leave their children? How would expectant mothers be treated? Earlier this year, the U.S. Navy issued its first maternity flight suit.

Women volunteered in the past on their own accord, and they deserve respect for the roles they have filled. A strong military will indeed include women, but their service should remain voluntary. We should avoid any steps that may lead to the social experiment of compulsory service.

If the mandatory registration of young women with the Selective Service concerns you, please contact your U.S. Senators and Representatives and ask them to vote no on the National Defense Authorization Act (NDAA).

Take ACTION: Click HERE to send a message to U.S. Senators Dick Durbin, Tammy Duckworth and your local U.S. Representative to urge them to reject this foolish version of the NDAA which would require women to register for the Selective Service. In this age of “social justice,” the radical left would have us ignore the biological, physiological and emotional differences between men and women. We cannot remain silent as federal lawmakers consider a legislative mandate that will likely lead to wives, daughters and sisters one day being drafted.

“I’ll go ahead and make an argument that I think is based in scripture, based in general revelation and based
in a review of human history. One of the achievements of civilization is that, under normal circumstances,
wives and daughters are not sent into war as are husbands and sons.”
~Dr. Al Mohler (8/11/2021 Briefing)

The Transgender Juggernaut Threatens God’s Design for Male and Female