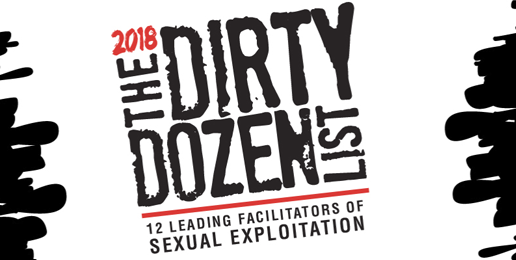 No corporation should profit from or facilitate sexual exploitation.

Unfortunately, many well-established brands, companies, and organizations in America do just that. Since 2013, the National Center on Sexual Exploitation has published an annual Dirty Dozen List to name and shame the mainstream players in America that perpetuate sexual exploitation—whether that be through pornography, prostitution, sexual objectification, sexual violence and/or sex trafficking.

The Dirty Dozen List is an activism tool that gives back power to individuals who want a voice in the culture. People can participate by taking easy online actions, from sending emails to sharing social media messages.

The Dirty Dozen List has a track record of uniting thousands of individual actions and targeting them to create monumental changes, such as policy improvements at Google, Hilton Worldwide, Verizon, Walmart, and the Department of Defense.

The National Center on Sexual Exploitation works for a world where human beings are not bought and sold for sex, whether on seedy street corners or via the modern convenience of the Internet and where sexual violence or exploitation are not tolerated in any industry. They work for a world free from sexual exploitation in all its forms.

One way they do this is through the annual “Dirty Dozen List,” which names and shames those who contribute significantly to the normalization of pornography, prostitution, sex trafficking, and other forms of sexual exploitation. The groups, agencies, businesses (and this year, individuals) named to this list are among the nation’s worst for masquerading as mainstream entities with respectable reputations, while facilitating access to, or pandering and profiting directly from pornography and or prostitution. Others push policy agendas that normalize egregious forms of sexual exploitation. This list ensures that their participation and collusion with the various aspects of the sex trade becomes public knowledge, and equips concerned citizens with information and tools to hold them accountable.

We are grateful for the work of the National Center on Sexual Exploitation and will stand with them until the normalization of sexual exploitation ends and companies and others no longer stand in allegiance with pornographers, sex traffickers, and sex buyers.

Founded in 1962, the National Center on Sexual Exploitation (NCOSE) is the leading national organization exposing the links between all forms of sexual exploitation such as child sexual abuse, prostitution, sex trafficking and the public health crisis of pornography.

Say No to Forcing Women to Register with the Selective Service