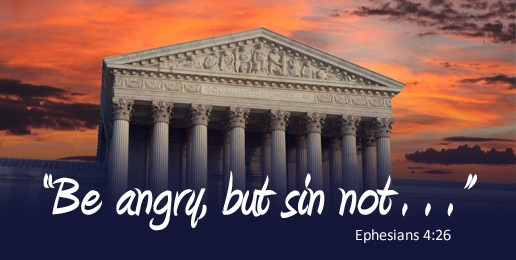 The Ethics and Religious Liberty Commission of the Southern Baptist Convention just released a document titled “Here We Stand: An Evangelical Declaration on Marriage,”  signed by scores of religious leaders. It is largely an excellent document that embodies an unequivocal, courageous commitment to truth.

That said, it also makes the troubling claim that Christians ought not be angry: “Outrage and panic are not the responses of those confident in the promises of a reigning Christ Jesus.”

My concern about this may seem an unnecessary quibble, but the notion that Christians ought not feel angry is integral to the serious problem of Christian silence on matters related to homosexuality.

This statement echoes what Trinity Evangelical Divinity School New Testament professor D.A. Carson said in a recent interview with Desiring God: “This is no time for panic, or resentment, and it is certainly no time for hate.”

Clearly, it is no time for panic, and it’s no time for hate if by hate Dr. Carson is referring to hatred of persons.

I think, however, that resentment of injustice and hatred of wickedness are warranted. A fuller, more nuanced discussion would have been helpful in freeing Christians from bondage to a neutered, passionless complaisance regarding a pernicious Court decision that embodies pernicious ideas about marriage and homoeroticism.

The claims about anger expressed in the declaration and articulated by Dr. Carson seem to contradict the views of Leon Podles in an article titled “Unhappy Fault” published in Touchstone Magazine:

[M]any Christians have a false understanding of the nature and role of anger. It is seen as something negative, something that a Christian should not feel.

In the sexual abuse cases in the Catholic Church, those who dealt with the bishops have consistently remarked that the bishops never expressed outrage or righteous anger, even at the most horrendous cases of abuse and sacrilege.

…
Conrad Baars noticed this emotional deformation in the clergy in the mid-twentieth century….In forgetting that growth in virtue was the goal of the Christian’s moral life, it forgot that the emotions, all emotions, including anger and hate, are part of human nature and must be integrated into a virtuous life.

Baars had been imprisoned by the Nazis. He knew iniquity firsthand and that there was something wrong with those who did not hate it:

A little reflection will make it clear that there is a big difference between the person who knows solely that something is evil and ought to be opposed, and the one who in addition also feels hate for that evil, is angry that it is corrupting or harming his fellow-men, and feels aroused to combat it courageously and vigorously.

Wrath is a necessary and positive part of human nature: “Wrath is the strength to attack the repugnant; the power of anger is actually the power of resistance in the soul,” wrote Josef Pieper. The lack of wrath against injustice, he continued, is a deficiency: “One who does good with passion is more praiseworthy than one who is ‘not entirely’ afire for the good, even to the forces of the sensual realm.”

Aquinas, too, says that “lack of the passion of anger is also a vice” because a man who truly and forcefully rejects evil will be angry at it. The lack of anger makes the movement of the will against evil “lacking or weak.” He quotes John Chrysostom: “He who is not angry, whereas he has cause to be, sins. For unreasonable patience is the hotbed of many vices, it fosters negligence, and incites not only the wicked but the good to do wrong.”

As Gregory the Great said, “Reason opposes evil the more effectively when anger ministers at her side.”

Sorrow at evil without anger at evil is a fault….

I’m not alone in my concern about the ERLC’s statement about anger. New Testament scholar Robert A. Gagnon is also troubled:

I believe the unnamed author of the document…erred in claiming that Christians should not express outrage at this decision….When I read the document, this statement jumped out at me more than any other. Apparently, I wasn’t the only one for whom this was the case. Christianity Today highlighted that remark above all others (in apparent approval, unfortunately).

Jesus expressed outrage at sin repeatedly in his ministry (the cleansing of the temple is a fairly concrete case in point). So did John the Baptist (his direct criticism of Herod Antipas for taking his brother’s wife is an obvious instance). So did Paul (I would say that outrage was a hallmark of his comments on tolerance for the incestuous man in 1 Cor 5). So did John of Patmos in Revelation (comparing the Roman Empire and its emperors to a harlot and a disgusting 7-headed beast rising from the sea, a puppet of the dragon that symbolizes Satan; likewise symbolizing the provincial imperial cult leaders as a blasphemous beast rising from the earth).

Friends, if this were the Supreme Court attempting to restore the Dred Scott ruling, would it be unchristian to express “outrage”?…Democracy and liberty in America have been struck the greatest body blow in our lifetime. The action of the five lawless Justices will have enormous negative repercussions for the church corporately and Christians individually. And outrage at egregious immorality is not antithetical to love. This action by the Lawless 5 will harm many, especially those who experience same-sex attractions. We should have a godly outrage toward that.

In my view, although the statement polarizes outrage and faith (implicitly also love), the real polarization is between outrage and “niceness.”

It is troubling to have religious leaders advocating a generalized prohibition of anger. There exists evil in the world about which those who know truth should outrage. God does not enjoin followers of Christ never to feel or express anger. We need to guard how we express anger, and we must  temper anger when excessive. But we ought to feel anger about wickedness that harms those we are commanded to love.

Here are just a few evils that warrant Christian outrage:

And we should feel outrage that parents of an eight-year-old boy permitted him to cross-dress and “vogue” in the recent New York City “pride” parade after which throngs of adults with darkened minds cackled and shrieked at the tragic spectacle of an exploited little boy in a dress sashaying across a stage.

Perhaps the ERLC marriage declaration needed to be more carefully crafted in order to make a clearer distinction between permissible and warranted righteous wrath and impermissible types of  expressions of anger. Perhaps the writer or writers could have distinguished between bitterness and appropriate anger at evil that harms. Perhaps they should have warned against excessive anger.

With all due deference to men far wiser and knowledgeable than me, I think what America needs right now is righteous anger and fearless, impassioned denunciation of a sexuality and marriage ideology that deprives children of their rights and threatens the temporal and eternal lives of men and women.