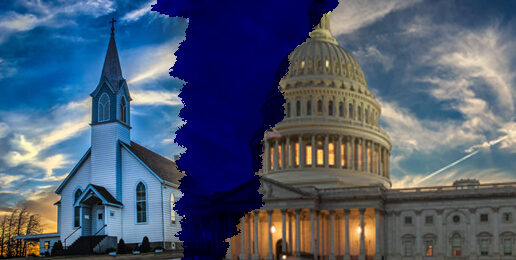 Do Christians Regularly Violate the Separation of Church and State?
Written By Laurie Higgins   |   09.15.21
PRINT

Many Christians and non-Christians misunderstand the relationship between morality and religion. Many mistakenly believe that morality is the same thing as religion and, therefore, mistakenly believe that they should not advocate for policies that reflect their moral beliefs. But morals and religion are not the same, and basing our decisions on public policies, laws, or elections on beliefs that derive from religious convictions does not constitute an unconstitutional establishment of a state religion.

All laws reflect or embody someone’s morality. The moral beliefs of people who hold theistic worldviews are no less valid in the public square than the moral beliefs of those who hold atheistic worldviews—which, of course, are faith-based also. The Establishment Clause of the First Amendment was intended to prevent the establishment of a state religion, not to prevent religious beliefs from informing political decisions.

People from diverse faith traditions or no faith could all arrive at the same position on a particular public policy. For example, although Orthodox Jews, Muslims, Catholics, Baptists, and atheists may all oppose abortion because they value human life, the reasons for that valuation of life differ. If there is a secular purpose for the law (e.g., to protect incipient human life), then voting for it does not violate the Establishment Clause of the First Amendment.

The sources of the various parties’ desires to protect incipient life are not the concern of the government. It would be not only absurd but also unethical for the government to try to ascertain the motives and beliefs behind anyone’s opposition to abortion and even more unethical for the government to assert that only those who have no religious faith may vote on abortion laws. Such an assertion would most assuredly violate the Free Exercise Clause of the First Amendment.

The religion clauses of the First Amendment were intended to protect religion from the intrusive power of the state, not the reverse. The Establishment Clause states that “Congress shall make no law respecting the establishment of religion.” That does not mean religious convictions are prohibited from informing political values and decisions. To expect or demand that political decisions be divorced from personal religious beliefs is an untenable, unconscionable breach of the intent of the First Amendment which also includes the oft-neglected Free Exercise Clause which states that Congress shall make no law prohibiting the free exercise of religion.

“[F]orcing religious arguments to be restated in other terms asks a citizen to ‘bracket’ religious convictions from the rest of her personality, essentially demanding that she split off a part of her self … to bracket [religious convictions] would be to bracket—indeed, to annihilate—herself. And doing that would preclude her—the particular person she is—from engaging in moral discourse with other members of society.”

To paraphrase Richard Neuhaus, that which is political is moral and that which is moral, for religious people, is religious. It is no less legitimate to have political decisions shaped by religion than by psychology, philosophy, scientism, or self-serving personal desire.

If allowing religious beliefs to shape political decisions represents a violation of the Establishment Clause and an inappropriate commingling of religion and government, then American history is rife with egregiously unconstitutional actions, for religious convictions have impelled some of our most significant social, political, and legal changes including the abolition of slavery, antiwar movements, opposition to capital punishment, and the passage of civil rights legislation.

Martin Luther King Jr.’s “Letter from Birmingham Jail” is replete with references to his Christian faith which informed his belief about the inherent dignity, value, and rights of African Americans, a belief which he lost his life to see enshrined in law. He wrote what would now certainly generate howls of opposition:

“Progressives” have no objection to people of faith participating in the democratic process so long as their views comport with “progressive” positions. Liberals never cried foul when Quakers or Catholics opposed the Vietnam war because of their religious convictions, and liberals do not object that Catholic opposition to the death penalty represents a violation of the “separation of church and state”–a phrase not found in the Constitution.

I don’t recall any “progressives” objecting when Senator Rob Portman and former president Barack Obama cited their religious beliefs in defense of their radical shifts in position on homosexual faux-marriage. Portman said,

The overriding message of love and compassion that I take from the Bible, and certainly the Golden Rule, and the fact that I believe we are all created by our maker, that has all influenced me in terms of my change on this issue.

After his flip-flop—er, “evolution” on faux-marriage, Obama, like Portman, cited the Bible as his justification:

When we think about our faith, the thing at root that we think about is not only Christ sacrificing himself on our behalf, but it’s also the Golden Rule, you know? Treat others the way you’d want to be treated.

In contrast, when conservative people of faith participate in the political process, citing their religion as the source of their judgments, suddenly the Establishment Clause has been violated.

Apparently neither Portman nor Obama think much about what the Bible says about sex, marriage, or repentance. And apparently, neither Portman nor Obama understand the Golden Rule. The Golden Rule does not require Christians to affirm all the desires, beliefs, and actions of all humans. It requires Christians to treat others as they—disciples of Christ—want to be treated as disciples of Christ.

What the government must not do is impose laws exclusively religious in nature like Sharia laws. There should be no laws requiring the observance of any particular religion. No laws governing baptismal practices or Communion. No laws requiring prayer or circumcision. But, for example, people whose faith points to the worth of all people may legitimately work toward enacting laws that oppose capital punishment, euthanasia, or abortion. People whose religious beliefs include pacifism may legitimately work toward preventing or stopping military engagements.

No one is legally, constitutionally, ethically, or morally obligated to divorce their faith from their political decisions.

Richard Neuhaus argues persuasively in his book The Naked Public Square that a polity denuded of religion will be clothed soon enough in some other system that functions as religion by providing “normative ethics.” A democratic republic cannot exist without objective normative ethics that render legitimate the delimitation or circumscription of individual rights.

Historically, the sources of the absolute, transcendent, objective, universal truths that render legitimate our legal system have been “the institutions of religion that make claims of ultimate or transcendent meaning.”

Neuhaus argues that when religion is utterly privatized and eliminated as a “source of transcendence that gives legitimate and juridical direction and form, something else will necessarily fill the void, and that force will be the state.”

If the body politic claims there are no absolutes or delegitimizes religion as an arbiter of right and wrong, or good and evil, then the state will fill the vacuum, relativizing all values, and rendering this relativization absolute.

Lawmaking absent an understanding that there exist moral truths that are objective and universal would represent an illegitimate and hubristic arrogation of power.

What sense does outrage at human rights violations make if we assert there are no universal, transcendent, eternal, objective truths? And if we agree that these truths exist, that they transcend the subjective opinions of any particular individual, then what is their source other than a supernatural, eternal, transcendent being?

There are numerous factors that have resulted in a diminished valuation or recognition of the essential place of a belief in God as the source of transcendent truth in American society and politics, one of which is our remarkable cultural diversity. A healthy respect for the pluralism in America, however, need not and should not degenerate into what retired Campbell University law professor Lynn R. Buzzard describes as a “religion of secularism, excluding religion from participation in the pluralism.”

Princeton University law professor Robert George explains that our cultural degradation has, at least in part, resulted from an “orthodox secularism [that] stands for the strict absolute separation of not only church and state, but also faith and public life.”

Allowing religious institutions and ideas to inform our understanding of right and wrong, which is a necessary precursor to making legislative and juridical decisions, does not represent a violation of the Establishment Clause. Indeed, as Samuel Silver explains, “The government, as defined by the First Amendment and explained by its author James Madison, must remain neutral between various sects of religion, but it is not required to remain neutral between religion and irreligion.”

Prohibiting religiously derived understandings of right and wrong to shape political decisions, would, however, represent a violation of the Free Exercise Clause of the First Amendment. Buzzard writes that “Free Exercise will not be construed as merely creating a zone of non-governmental interference or the creation of an exemption from conscience-opposed activity, but the opportunity to be full partners in the pluralism of our day.”

To leftists, the idea of a separation of church and state no longer points to the importance of protecting religious freedom from the intrusive power of the state but instead refers to coercively eradicating theologically orthodox religious expression from the public square. Only secular or theologically heterodox worldviews, which are as shaped by myopic, dogmatic, unproved assumptions as secularists claim theologically orthodox religious worldviews are, will be tolerated in our pretend-tolerant society.