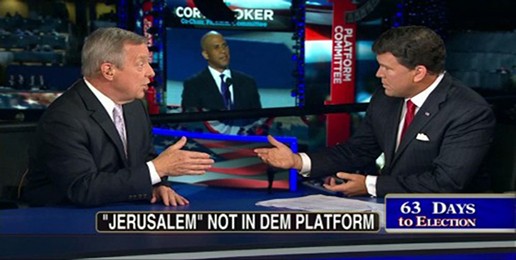 I often find the statements or actions of Illinois politicians embarrassing or worse. Watching U.S. Senator Dick Durbin’s interview with Bret Baier was one of those occasions. I cannot for the life of me understand why Illinoisans continue year after year to vote for men like Dick Durbin–particularly with Illinois in a state of perpetual decline.

The unflappable, congenial, and always civil Bret Baier (no Rachel Maddow or Bill O’Reilly here) tried indefatigably to get  Durbin to answer a simple question regarding the noticeable deletion of the word “God” from the 2012 Democratic platform. The phrase “God-given potential” appeared in the 2008 platform but was deleted from this year’s platform. Baier attempted multiple times to ask the obvious and reasonable question: “Why?” Durbin’s response was defensive, combative, rude, and evasive. The gentleman “doth protest too much, methinks.”

Below is a transcription of their exchange, which you can also watch here:

Baier: God was taken out of the platform, why do that?

Durbin: Well, I can just basically tell you if the narrative that is being presented on your station, and through your channel and your network is the Democrats are godless people, they ought to know better. God is not a franchise of the Republican Party

Durbin: Those of us who believe in God and those of us who have dedicated our lives to helping others in the name of God don’t want to take a second seat to anyone who is suggesting that one word out of the platform means the Democrats across America are godless. Come on, Bret.

Durbin: So, what’s your point?

Baier: The question is, why take it out this time?

Baier: I’m not trying to draw any conclusion. I’m just asking the question: why was the word taken out?

Baier: And we’re going to talk about that in a second. We’re talking about the platform here, and there are two changes that we just noted, one is that God was taken out from 2008 to 2012 and two, that Jerusalem was not mentioned. I’m not drawing conclusions; I’m just asking why these changes were made.

Durbin: Bret, let me just say, I chaired the platform committee for two Democratic conventions. We produced the most unread document in the history of American politics, to suggest that this document and the insertion of two words here and one word there, now defines politics in America suggests to me that you’re not focusing on the real issues that Americans care about.

Baier: But Senator, you know…

Durbin: They want the American people to get back to work.

Baier: I understand that…

Durbin: We want to continue to create jobs.

Baier: Let’s talk about that in one second. You know that Democrats in Tampa talked about the Republican platform and what was and was not in there. So, when I’m asking you about these two changes and two words, I’m just asking why. I’m not drawing conclusions.

Durbin: I’m telling you, your conclusions are wrong, if you’re drawing them.

Later Baier asked Charles Krauthammer about the deletion of the reference to God (a mere “trifle” to Durbin), which has even some moderate Democrats concerned. Krauthammer responded:

Platforms don’t really tell you what’s going to happen. But when you compare today with what people used to believe, used to say, and used to proclaim, and you see these glaring changes, you know that something has changed in the party. This is one place that Obama has led from in front and not from behind, moving the party—not just himself. And that, I think, is extremely significant.