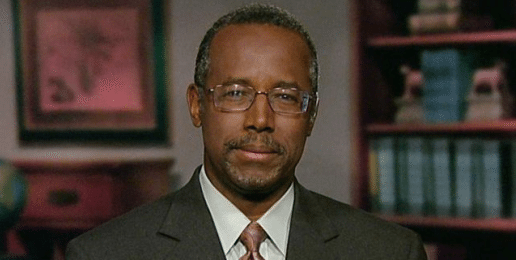 In October 2014, the Southern Poverty Law Center (SPLC) put Dr. Benjamin Carson on its “Extremist Watch List.” Why? Because Dr. Carson holds the traditional, historical, and true belief that marriage is the union of one man and one woman and has the courage to express that belief.

Who else is on this “Extremist Watch List”? In addition to a host of unsavory Neo-Nazis, KKK members, and skinheads, the SPLC lists the following as “extremists”:

The depth of the ignorance and malignity of the SPLC’s leaders is exposed through their defamation of a man of such unquestioned integrity as Dr. Carson.

After being exposed by Bill O’Reilly on his Fox News Channel program this week (video here), and receiving “intense criticism” from the public, the far Left SPLC decided to reverse their decision and issue an apology to Dr. Carson—well, an apology of sorts. You know, the sort that’s not really an apology. Here’s an excerpt from their deeply contrite apology:

In October 2014, we posted an “Extremist File” of Dr. Ben Carson. This week, as we’ve come under intense criticism for doing so, we’ve reviewed our profile and have concluded that it did not meet our standards, so we have taken it down and apologize to Dr. Carson for having posted it.

We’ve also come to the conclusion that the question of whether a better-researched profile of Dr. Carson should or should not be included in our “Extremist Files” is taking attention from the fact that Dr. Carson has, in fact, made a number of statements that express views that we believe most people would conclude are extreme….We laud Dr. Carson for his many contributions to medicine and his philanthropic work, and we, like so many others, are inspired by his personal story. Nevertheless…because Dr. Carson is such a prominent person, we believe that his views should be closely examined.

I wouldn’t want to go so far as to claim that the SPLC is a racist organization, but we can’t help but wonder if Dr. Carson’s skin color may have factored into the SPLC’s decision to remove him from their fear-mongering, money-making “Extremist Watch List” while leaving Dr. Brown, Cliff Kincaid, Charles Murray, and Tony Perkins on the list.

One brief word about “extremism”: “Extremist” is a free-floating term with no fixed meaning relative to truth or goodness. Being an “extremist” can be either good or bad depending on the activity or belief from which one has become distanced. In the midst of a culture so corrupt and decadent that citizens cheer when men legally wed men and women flock to a movie that extols the pleasures of sadomasochistic sex, we should thank God that for our “extremist” status.

If having a public forum and expressing the belief that marriage is the union of one man and one woman warrant inclusion on a list of hateful extremists, then the SPLC must be either short-staffed, which seems unlikely given the millions of dollars they suck from a gullible public, or they’re slackers.

There are countless Jews and Christians from Catholic, Orthodox, and Protestant faith traditions who believe that marriage is the union of one man and one woman. And many of these men and women have access to public forums in which they express their beliefs. They express their beliefs in college, university, and seminary classrooms; podcasts; sermons; scholarly journals, magazines; newspapers; websites; speaking engagements; and news programs. So, why are they not on the ethically impoverished Southern Poverty Law Center’s “extremist” list?

Perhaps the reasons for the SPLC’s oddly truncated list are twofold:

1.) A common tactic of homosexual activists is to exploit the natural sheep-like human tendency to desire membership in the cool group and the natural human tendency to avoid pain and conflict. The Left maligns leaders who tell the truth about homoeroticism so that others who also hold these same true beliefs will not want to be associated with them. The Left thereby effectively marginalizes truth-tellers.

2.) The SPLC leaders surely know that if they included every public person who affirms the truth that marriage has a nature central to which is sexual complementarity, the SPLC would discredit itself—further.

We should learn three lessons from this newest unforced error from the SPLC.

Christians need to speak the truth in love about homosexuality and gender confusion with the perseverance and boldness that the Left speaks lies.

Second, Christians need to publicly come alongside those who are speaking the truth about homosexuality, gender confusion, marriage, and children’s rights.

Finally, Christians need to be willing to be persecuted for expressing biblical truth—which is to say, truth—about homosexuality and gender confusion.

Temporal and eternal lives are at stake.