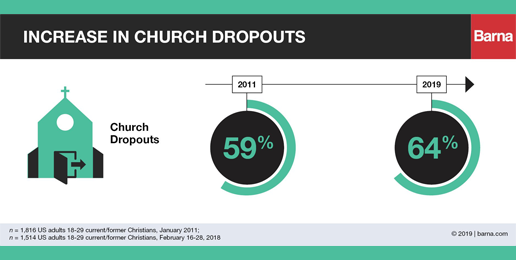 A new book coauthored by David Kinneman, president of Barna Group, reveals the church dropout rate among young people who profess Christianity has increased in the last decade. But research also found a bright spot which became the focus of the book Faith for Exiles: 5 Ways for a New Generation to Follow Jesus in Digital Babylon.

In 2011, 59 percent of 18-29-year-olds with a church background reported they had quit attending church. In 2019, that number had risen to 64 percent. Using additional Barna research, Kinneman, along with coauthor Mark Matlock, former executive director of Youth Specialties, found that 1 in 10 of the Christians who remained faithful in their church involvement were what they termed, “resilient disciples.”

According to Kinneman, “From a numbers point of view 10% of young Christians amounts to just under four million 18–29-year-olds in the U.S. who follow Jesus and are resiliently faithful. In spite of the tensions they feel between church and everyday life, they keep showing up.”

Kinneman said they chose to call the 10 percent “exiles” because he and Matlock are, “convinced that the biblical concept of exile is the right way to think about Christians’ relationship to the current culture,” which they refer to as “digital Babylon.” Kinneman continues, “When we talk with young adults they resonate deeply with the concept of exile—they feel like exiles, being torn between the expectations of the Church and challenges of the world.”

In the book, they define these resilient disciples as those who, “have made a commitment to Jesus, who they believe was crucified and raised to conquer sin and death; are involved in a faith community beyond attendance at worship services; and strongly affirm that the Bible is inspired by God and contains truth about the world.”

Kinneman calls Faith in Exile the story of “the 10 percent of young Jesus followers whose faith is thriving in exile conditions… the good news about what churches are doing right to form resilient young disciples.”

The book presents research that shows resilient disciples prioritize “life of faith inside and outside their place of worship.” It categorizes them as experiencing Jesus, discerning culture, having meaningful relationships, engaging in a countercultural mission, and being involved in vocational discipleship. Kinneman believes that “By getting to know the resilient disciples, we can find out what formation experiences and relationships are most effective for growing resilient faith in exile.”

Further describing the book in a video trailer, Matlock said. “It’s really easy to focus on what the church is doing wrong. There’s an endless list of those things. But what is the church doing right? We want to focus on those things. How does that lead to faith creation?”

Many in today’s churches express concern and even dismay over Millennial and Generation Z Christians and the future of the church. But Kinneman and Matlock are hopeful  because of the resilient disciples they’ve met.

In a recent interview about the book with the Church Leaders podcast, Kinneman said, “I’ve been looking at research about this emerging generation for a long time, and it’s hard not to be a little discouraged about the people that walk away from faith or that lose their confidence in the Bible… but what about these young, resilient disciples who are themselves offering an effective critique of their generation and of our generation, and of what we have become as a church on their watch?

“I’m just so encouraged by the faith of this generation.”