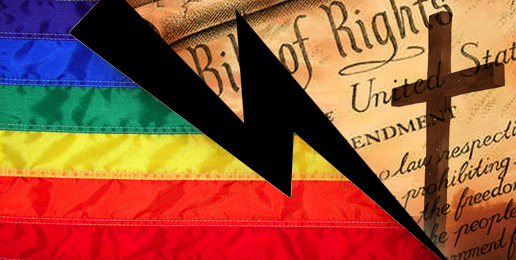 Conflicts Between Religious Freedom and the Gay Agenda Trouble Most Americans
Written By Micah Clark   |   06.21.19
PRINT

A few weeks ago, I shared the findings of an extensive national survey conducted by the Barna Group covering religious freedom, religious monuments and displays.

They have passed along the internals of another large national poll looking at attitudes toward sexual orientation, gender identity and religious freedom.

These results are timely given the U.S. Supreme Court’s move this week to scold the Oregon Court of Appeals for imposing a $135,000 fine on Aaron and Melissa Klein, a Christian couple who owned a bakery and did not want to participate in a homosexual wedding.

The Kleins lost their life savings and were forced to shut down their business because of the conflict over their religious beliefs. They were also the victims of vandalism, threats, and public harassment.

The U.S. Supreme Court is asking the state to review their actions in light of a ruling involving a similar situation in Colorado where the nation’s highest court found that baker Jack Phillips’s 1st Amendment rights were violated by the Colorado Equal Rights Commission.

Here are a few of the findings from this March 2019 survey:

• The highest response to any question or statement, with 84% agreement, was “Each law must respect every citizen’s freedoms, no matter who they are.”

• Three out of four adults (77%) agreed that the government should remain neutral when it comes to religion, it should not be in the business of deciding whose faith is or is not acceptable because such decisions amount to discrimination against people of faith.

• Seven out of ten (72%) of adults agree that the government punishing individuals for living out their deeply-held religious beliefs is a form of discrimination.

• Two out of three adults (65%) disagreed that the government should have the right to ban personal, gender specific pronouns such as him, her, his, hers, male or female and to punish people using those terms.

• Sixty-four percent (64%) agreed that the vast majority of Christians and other people of faith who believe homosexuality is wrong do not hate gay and lesbian people.

• Six out of ten adults (60%) agreed that laws that punish people who hold traditional views on gender identity and sexual orientation with fines, censorship or jail are unjustly discriminatory.

• Nearly six out of ten adults (59%) said that state governments should not have the legal authority to force Christian-owned businesses to close if the business chooses to not serve a same-sex wedding or event.

• Roughly the same portion (58%) agreed that there is no reason to single out and punish adoption providers who believe that the best home for a child includes a father and a mother.

• Surprisingly, only half (51%) say that it is not appropriate for a biological male who now identifies as a female to compete in women’s sporting events.

People seem the most agitated by the possibility of the government cracking down on people simply because they hold to traditional views on sexuality, or because they use traditional language to communicate about homosexual issues and gender.

The pollsters note that a large share of people hold opinions on matters that they do not feel strongly about, so under pressure, it is possible that their views could be changed to a different position.  What was once not even an issue for public discussion has become a morass of feelings, facts, and beliefs that many do not know how to resolve.