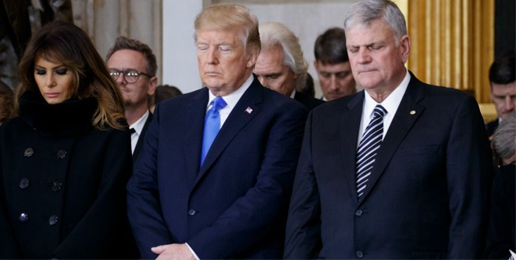 Reverend Franklin Graham, the president and CEO of the Billy Graham Evangelistic Association, posted a message on Facebook and sent an email to his social media followers requesting they dedicate Sunday, June 2, as a day of prayer for President Donald Trump. Two hundred and fifty Christian leaders quickly responded by signing the proclamation, including three former presidents of the Southern Baptist Convention (the largest Protestant denomination in America) and the general superintendent of the Assemblies of God.

“We the undersigned are calling for June 2 to be a special Day of Prayer for the President of the United States, Donald J. Trump, that God would protect, strengthen, embolden, and direct him. We believe our nation is at a crossroads, at a dangerous precipice. The only one who can fix our country’s problems is God Himself, and we pray that God will bless our president and our nation for His glory.”

The full statement can be read on Rev. Graham’s Facebook page. Tens of thousands are expected to answer the call to pray for the president .

In an interview with Tony Perkins, president of the Family Research Council, Graham referred to Trump as “the most Christian-friendly president” in his lifetime. He noted, “I don’t think any president in modern history has come under attack day after day after day by almost all the media. That’s just never happened. And it distracts the president. It weakens our country.”

While quick to point out that his call to prayer isn’t an endorsement of Trump, Graham quoted a scripture verse that calls on Christians to pray for “kings” and all those in authority. He asked his followers to leave a comment on his Facebook page stating that they will pray for the president: “And will you share this on your social media platforms so that we can have as many people as possible praying?” he added.

Graham concluded with a quote from the Apostle Paul:

“For we do not wrestle against flesh and blood, but against principalities, against powers, against the rulers of the darkness of this age, against spiritual hosts of wickedness in the heavenly places” (Ephesians 6:12).

The False Gospel of the Progressive Church