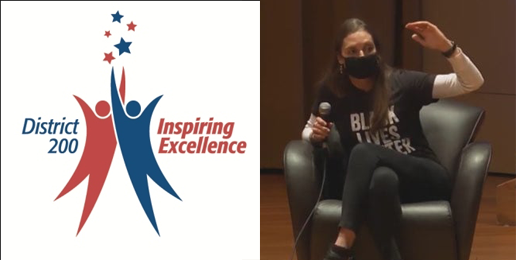 At the most recent School District 200 Board Meeting in Wheaton, Illinois, new school board member and cunning rhetorician, Mary Yeboah, Director of Graduate Student Life at Wheaton College, posed six questions to the board,  beginning with a prefatory statement that let the woke cat out of the bag:

I would like to ask six rhetorical questions regarding the proposed October 10th, 2022 and October 9th, 2023 no-school all-grades Columbus Day/Indigenous People’s Day in relation to district purposes outlined in the mission of School District 200, Vision 2022, and the portrait of a graduate work. To be very clear, these are not questions that I expect you to answer right now. I am asking them for the benefit of reflective thinking for the district, especially in the month leading up to the approval of these calendars.

One, does the District 200 administration recognize the impact of holidays, statues, and other memorials on shaping school culture, which in turn shapes student experiences and outcomes?

Two, does the District 200 administration consider celebrating extreme violence, theft, genocide, and dehumanization to be in line with the study of social science to help students develop the ability to make informed and reasoned decisions for the benefit of the global society in which they live?

Three, does the District 200 administration affirm the accurate telling of history and recognize the impossibility of “discovering” land already inhabited?

Four, does the District 200 administration take into consideration the perspectives of Indigenous people regarding this particular calendar event?

Five, could maintaining this District 200 calendar event unintentionally support a myth of U.S. exceptionalism that could undermine district efforts to create diverse, inclusive schools for all children?

Lastly, does this calendar event advance the vision and mission of District 200 goals? And if it does not, must it remain despite state-level support?

It was so considerate of Yeboah to make very clear that she didn’t expect her six loaded questions to be answered immediately. It was also odd in that she had declared these were rhetorical questions, which are questions intended to make a point—not to be answered.

1.) Does Yeboah recognize the impact of using a leftist lens through which to view, socially construct, revise, and impose a particular interpretation of the meaning of holidays, statues, and other memorials, which in turn shapes student experiences, beliefs, and outcomes—including outcomes like the 2020 riots?

What school has ever used Columbus Day to celebrate extreme violence, theft, genocide, or dehumanization?

Campuses and Western critics in the last half-century have turned a once risk-taking and heroic Christopher Columbus into an evil emissary of disease and destruction. History is now seen as one-dimensional melodrama in which our contemporary duty is to pick sinners and saints of the past based on our own modern (quite imperfect) perceptions of morality and then judge them worthy of either hagiography or banishment from memory.

And Hanson shares a fact inconvenient to the narrative of those who love to hate America:

[K]nocking down images of Columbus will not change the fact that millions of indigenous people in Central America and Mexico are currently abandoning their ancestral homelands and emigrating northward to quite different landscapes that reflect European and American traditions and political, economic, and cultural values.

3.) Does Yeboah affirm the accurate telling of history? Does Yeboah believe children at every age should be alerted to every serious foible, sin, or moral failing of every human involved in significant historical events or achievements? Should children of every age be taught about MLK Jr.’s significant moral failings? Should children of every age be taught the sordid stories of the abuse of women by John F. Kennedy and his lady-killer brother Ted Kennedy? Should kindergartners be taught that Harvey Milk was a homosexual ephebophile who acted on his sexual interest in teenage boys?

Regarding Yeboah’s concern about the impossibility of “discovering” an already inhabited land: Good teachers should and do explain that “discover” means “to obtain knowledge of something through observation, search, or study.” Benjamin Franklin “discovered” electricity in this sense. James Wilson Marshall “discovered” gold at Sutter’s Mill in this sense. The gold was always there in the ground. Erasmus Jacobs, son of a poor Boer farmer in South Africa “discovered” diamonds along the banks of the Orange River—diamonds that had always been there.

4.) Does Yeboah consider the perspectives of indigenous people about celebrating their histories of extreme violence, theft, genocide, and dehumanization on Indigenous People’s Day?

5.) In her fifth point, Yeboah again presumes a premise she doesn’t attempt to prove: In her fifth rhetorical question, she presumes that American exceptionalism is a myth. But is it? What objective standards or criteria has Yeboah applied to conclude that America is not exceptional?

6.) Yeboah implies that honoring Christopher Columbus’ exploratory achievement and how it transformed the world violates the vision and mission of District 200, which are here set forth:

Our vision is to be an exemplary, student-focused school district that is highly regarded for the competence and character of our students and people, programs, and learning environment.

Our mission is to inspire, encourage, and challenge, and to support all students to reach their highest level of learning and personal development.

Yeboah has yet to make her case that honoring a history-making explorer undermines the development of competence and character, or how it undermines the mission to inspire, encourage, and challenge students to reach their highest level of learning and personal development. Do District 200 taxpayers even know how District 200 distinguishes between good character and bad?

Yeboah’s reference to the vision and mission of District 200 raises other questions:

In a Facebook post, Yeboah announced she’s all in for “anti-racism,” which everyone should know by now is a euphemism for anti-white racism. 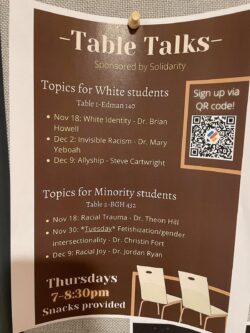 In an upcoming “Table Talk” at Wheaton College, “Topics for White students” include “Invisible Racism” with guest speaker Mary Yeboah.

Yeboah is also a promoter of the  controversial “Culturally Responsive Teaching and Leading Standards” that garnered nationwide condemnation, including by National Review.

In a Feb. 7, 2021 Facebook post, Yeboah admits that one of her “favorite scholars” is Tyrone Howard who wrote the book All Students Must Thrive. Howard’s publisher writes that Howard’s book “brings together three frameworks relevant for equity in schools–wellness, critical pedagogy, and critical race theory.”

If there’s any doubt about Yeboah’s “progressive” bona fides, this should dispel it: In 2020, as BLM was destroying cities across the country, Yeboah was part of a “white moms” group in Wheaton that created signs to encourage support–including financial support–for the Black Lives Matter organization, which is hell-bent on destroying the nuclear family and normalizing homosexuality and cross-sex impersonation.

And Yeboah worries that Columbus Day will undermine character development in children? Sheesh

Public schools are no longer places that foster character development or provide the highest level of learning. Get your kids out now.