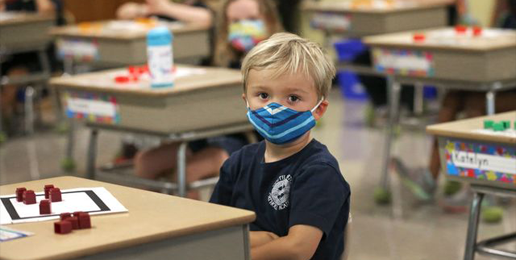 In their quest to restrict liberty, impose morality, and control culture, leftists who claim fealty to science—including soft, pseudo, semi, and specially selected science—often neglect to share all the science available. From “trans”-cultic practices to faux-comprehensive sex ed to Covid-19, leftists cherry-pick science to justify their abuse of power.

With schools opening and COVID surging, leftists who care more about exploiting children for ideological purposes than protecting them are once again abusing science, this time to justify mask mandates for children. Justifying mandates necessitates concealing inconvenient science that stands in the way of their expansionist goal of cultural conquest.

First, a personal note in hope of forestalling accusations that I am biased against COVID-mitigating efforts or that I do not take COVID-19 seriously: I have been vaccinated.

On August 20, 2021, New York Magazine’s Intelligencer website published an article by David Zweig about the CDC’s summary published in May of a large study on the efficacy of COVID-19 mitigation measures including masks. Zweig’s article, titled “The Science of Masking Kids at School Remains Uncertain,” exposes what was omitted by the CDC in its summary. As the Delta variant spreads and increasing numbers of local and state governments are either mandating masks on children over two years old or being vilified for prohibiting mask mandates, these omissions become even more indefensible.

It covered more than 90,000 elementary-school students in 169 Georgia schools from November 16 to December 11 and was, according to the CDC, the first of its kind to compare COVID-19 incidence in schools with certain mitigation measures in place to other schools without those measures.

The relatively little press coverage on the study focused exclusively on the CDC’s public summary, which found “that masking then-unvaccinated teachers and improving ventilation” were associated “with a lower incidence of the virus in schools.”

Curiously, the CDC’s summary omitted some additional findings derived from the study:

These findings cast doubt on the impact of many of the most common mitigation measures in American schools. Distancing, hybrid models, classroom barriers, HEPA filters, and, most notably, requiring student masking were each found to not have a statistically significant benefit. In other words, these measures could not be said to be effective.

Zweig explains more about the nature of these omissions:

[T]he decision not to include the null effects of a student masking requirement (and distancing, hybrid models, etc.) in the summary amounted to “file drawering” these findings, a term researchers use for the practice of burying studies that don’t produce statistically significant results.

A null effect or null result “is a result without the expected content: that is, the proposed result is absent.” Zweig is saying that choosing not to include in the summary the null effects is analogous to file-drawering, which is a form of publication bias. It’s an attempt to conceal findings for reasons unrelated to science, likely in this case for political reasons.

“That a masking requirement of students failed to show independent benefit is a finding of consequence and great interest. … It should have been included in the summary.”

Absence of control groups in virtually all other studies purporting to show mask efficacy for children renders those studies meaningless:

Over and over, studies and reports on children in schools with low transmission rates claim in their summaries that masking students helped keep transmission down. But looking at the underlying data in these studies, masks were always required or widely worn, and implemented in concert with a variety of other interventions, such as increased ventilation. Without a comparison group that didn’t require student masking, it’s difficult or impossible to isolate the effect of masks. (emphasis added)

The omitted findings provide information critical to decisions regarding mandatory masking of children in that such masking is not without risks. Dr. Elissa Schechter-Perkins, the director of Emergency Medicine Infectious Disease Management at Boston Medical Center warns:

“[T]here are real downsides to masking children for this long, with no known end date, and without any clear upside. … I’m not aware of any studies that show conclusively that kids wearing masks in schools has any effect on their own morbidity or mortality or on the hospitalization or death rate in the community around them.”

Dr. Lloyd Fisher, president of the Massachusetts chapter of the American Academy of Pediatrics (AAP) agrees:

“Mask-wearing among children is generally considered a low-risk mitigation strategy; however, the negatives are not zero, especially for young children. … It is important for children to see facial expressions of their peers and the adults around them in order to learn social cues and understand how to read emotions.”

Between the health risks of masks for children and the absence of data demonstrating the efficacy of masks in mitigating the transmission of COVID-19, it’s surprising that the CDC and AAP recommend masking all children in school over two years old.

Zweig also reports that the “U.K., Ireland, all of Scandinavia, France, the Netherlands, Switzerland, and Italy—have exempted kids, with varying age cutoffs, from wearing masks in classrooms,” with results that should be reassuring to parents whom the CDC hopes to frighten into submission:

Conspicuously, there’s no evidence of more outbreaks in schools in those countries relative to schools in the U.S., where the solid majority of kids wore masks for an entire academic year and will continue to do so for the foreseeable future.

The rapid spread of the Delta variant has provided fuel to the fiery demands to mask all children over two.

A common argument right now is that the emergence of the Delta variant changes everything. Currently, some regions of the U.S. are seeing a surge of infections and hospitalizations among young people. But the numbers coming out of Britain continue to suggest that Delta is not more virulent–that is, it does not cause more severe illness on an individual basis to unvaccinated people–despite being more contagious. A pediatric immunologist at a major university hospital … said, “It is not biologically plausible that the same variant somehow is more dangerous for kids in the U.S. than it is in the U.K.”

If leftists stop bellowing “Follow the science” for a moment to catch their breath, someone should ask for their scientific studies proving conclusively that masking children prevents COVID-19 transmission and proving that the health benefits outweigh the costs. But don’t waste too much time waiting for their evidence. As Dr. Prasad recently wrote about the science behind the CDC’s masking policy,

The CDC cannot “follow the science” because there is no relevant science. The proposition is at best science-y; a best guess based on political pressure, pundit anxiety, and mechanistic understanding.

Leftists love their science-y fictions, which enable them to win by deception rather than by force.

Do 66,000 Pediatricians Really Support the AAP’s “Trans”-Affirmative Policy?
b
a
x
r