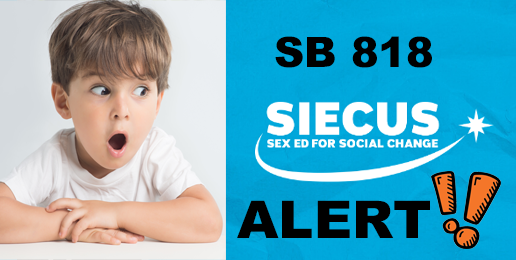 The newest manifestation of the creepy desire of Springfield leftists to normalize deviance in children is the laughably named, “Keeping Youth Safe and Healthy Act” (SB 818)—a bill composed entirely of socially constructed leftist beliefs from leftist lawmakers aided and abetted by leftist pro-abortion and “LGBTQ” organizations.

SB 818 would require all public schools—including charter schools—to align teaching in grades K-5 on “personal health and safety” with “National Sex Education Standards,”  which too are leftist social constructions. And it would require all upper grade sex education to align with those same “standards.” Therefore, in order to understand what exactly Illinois children would be taught, Illinoisans must read—not just the bill—but also the National Sex Education Standards, which I did to save our readers time.

The bill also requires that all materials presented to K-5 students in health and safety units be “age and developmentally appropriate” and “culturally appropriate.” More on that shortly.

When the bill’s sponsor State Senator Ram Villivalam (D-Chicago) was asked by State Senator Sue Rezin (R-Morris) for “the breakdown of what’s to be taught for second grade, fifth grade and eighth grade,” he responded,

In younger grades like kindergarten through second, the focus is on personal safety, what it means to be a good friend, and being able to talk to parents and trusted adults when someone wants you to do something that makes you feel uncomfortable or unsafe.

He forgot to mention that since his bill would require all public schools that provide “personal health and safety” units in grades K-2 to align content with the “National Sex Education Standards,” by the end of second grade, students will be expected to “Define gender, gender identity, and gender-role stereotypes” and how those sex-based conventions “may limit behavior.”

They will also be expected to “Identify different kinds of families (e.g., … cohabitating … [and] same-gender …).”

This is the “breakdown” Villivalam provided for grades 3-5:

In grades 3 to 5, instruction continues to cover healthy relationships and safety, but also delves into what children at those ages are experiencing like the physical, social and emotional changes related to puberty.

Sounds innocent enough, except he conveniently omitted the following information, which comes straight from the National Sex Education Standards for “comprehensive personal health and safety.”

Remember, if this law passes, no school would be able to provide any teaching in grades k-5 on personal health and safety unless it included the information just outlined.

In 2020, Villivalam tried to pass the REACH Act, which would have required all public schools, including charter schools, to teach “comprehensive sex ed” in grades K-12. The bill failed, so that tricksy little devil rejiggered it in such a way as to get disordered, age-inappropriate material before innocent little eyes. He did that by requiring in SB 818 all “personal health and safety” teaching to align with the deviant National Sex Education Standards. Very cunning, indeed.

Villivalam then offered this skeletal outline of grade 6-12 teaching in response to Rezin’s question:

Weeelll, that’s kinda, sorta what the National Sex Education Standards with which schools will have to align would require. I’ll try to slap some meat on those skeletal bones.

Students must “Define reproductive justice and explain its history and how it relates to sexual health.”

I think what we are doing when we are teaching—again, age-appropriate, medically accurate sex education—to our children, we are arming them with knowledge. And I don’t know when that has ever been a bad thing.  (Watch the video recording of the Illinois Senate debate.)

When seeking to indoctrinate children with leftist sexuality dogma, leftists blather on about “age-appropriateness” and “cultural-appropriateness” as if those terms describe some objective, transcendent, universal criteria rather than socially constructed and imposed leftist “standards.” Both terms are used to include ideas leftists love and exclude (i.e., censor) all ideas leftists hate.

Holmes claims she doesn’t know when knowledge has ever been a bad thing. Has she not read Frankenstein? Has she not heard of “gain-of-function” research?

If knowledge is never a bad thing, why not teach children about polyamory, zoophilia, or kink?

Oh, wait, I know. Those particular forms of sexual deviance are not age, developmentally, and culturally appropriate—according to mysterious leftist criteria.

**UPDATE: The Illinois House passed this highly controversial proposal by a partisan vote of 60 to 48 on Friday afternoon (May 28, 2021). It will be sent Governor JB Pritzker for his consideration. (Watch the video recording of the Illinois House debate.)

Take ACTION: Click HERE to send a message to Gov. Pritzker’s administrative staff to urge him to VETO SB 818 as a terrible overreach of government. Impressionable students in public schools should not be exposed to body- and soul-destroying messages that promote leftist beliefs about sexuality.