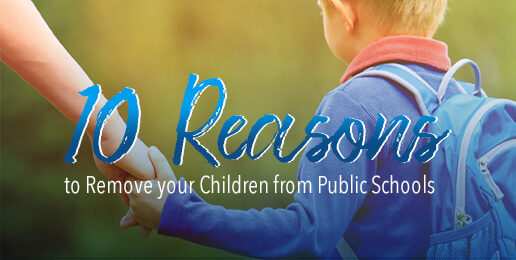 An assault has occurred on parental rights within the public school system. Parents have voiced their concerns across the nation about everything from perverted curriculum to forced masking. If any good came from the pandemic, it is that parents have seen what public schools are doing behind closed doors. This revelation should lead parents to remove their children from the grip of the government-run education system.

Here are my top ten reasons to leave public schools:

Many parents and grandparents were in school during the Cold War, or just following it, and view Communism as the enemy. However, universities hid a dark secret: Marxist philosophers, economists, and educators were devoted to continuing to teach the theory to the next generation. As the Marxist agenda became more elevated on college campuses in the 1980s and 90s, we were unconcerned. After all, this action only involved a handful of academic elites, right? Wrong. Today the consequences of ignoring the indoctrination of university students are readily apparent in our public schools. Those university elites educated the current teachers, curriculum developers, and administrators that now teach in your child’s school. The ideas of hatred towards capitalism, American exceptionalism, and devotion to humanism have slowly infiltrated public schools, starting with high schools and are moving towards younger students. Now, even kindergarten classes are taught Marxist ideologies.

CRT is in direct relation to the Marxist theory. As a result, CRT, which started in universities, is now spreading like wildfire across public school systems. Schools across the nation are telling teachers to divide their students by race. Instead of finding common ground and cooperative ways of interaction, students are divided and labeled according to race and ethnicity.

The LGBT lobby and organizations have forced their agenda into every facet of life, including schools. Girls’ sports are being decimated by male athletes masquerading as females, and neither girls nor boys can assume privacy in their respective bathrooms or locker rooms. Teachers are asking students to “choose” their sexuality and pronoun identifiers. Children are allowed to change their name and gender on school records without parental permission. Schools across the country are forming clubs like the Gay-Straight Alliance, yet denying official status to Bible clubs. The agenda has taken over the public schools to such a degree that parents cannot question the schools’ policies. (Illinois lawmakers passed legislation in 2019 to mandate the teaching of LGBT history in classrooms K-12th grade.)

It should not come as a surprise that academics are declining. As educators push their agendas, there is little time to teach mathematics or reading. In the last year, Illinois raised funding per student to $14,492, one of the highest per-student budgets in the nation. Yet, Illinois students are not succeeding academically. In Illinois and across the country, students are falling behind. The US ranks 38th in the world in math and, according to a recent study by Gallup, deficiencies in reading cost trillions of dollars. Many business owners state that they cannot find entry-level employees with basic skills such as money counting, phone etiquette, or even basic reading abilities. Declining academic achievement is devastating our children and our economy. (Click HERE to view the proficiency scores of the largest school districts in Illinois.)

The local school board and the state have actively limited transparency. They often refuse to show how funding is being distributed and deny parental involvement in the decision-making process. In January of 2021, the Williamson County Circuit Court ordered the Illinois school board of Herrin District #4 to repay $2.7 million in misused tax funds. The school was taken to court by one taxpayer who noted the misappropriations. Parents could prevent fraud and misappropriations if school boards would issue regular reports on the distribution of funds. Schools also lack transparency regarding the curricula they choose. A group of Republican lawmakers in Wisconsin are circulating a bill requiring schools and teachers to publish a list of materials and all curricula utilized by the school. If approved, schools failing to publish these lists will incur a $15,000 penalty. Transparency of materials and texts is an excellent idea; however, the Department of Education and teacher unions are fighting this bill and any attempt to require transparency.

Impediment of Parental Involvement and Rights:

The governmental system does not respect parents or their rights. During the pandemic, parents discovered the nature of curricula and were outraged at the indoctrination occurring in schools. As a result, parents and grandparents are attending school board meetings in large numbers. Parents have expressed concerns ranging from requests to remove CRT and Marxist curricula to concerns about forced masking. These parents are vocal but have been peaceful, with a few rare exceptions. Even though parents have a right to voice concerns about their children’s education, the local boards and teachers have been defiant. Often school boards have refused to answer questions. Have these board members forgotten that they are elected officials? Regardless, parents have been vilified, doxxed, and faced cancel culture for simply wanting to protect their children. Recent Virginia gubernatorial candidate, Terry McAuliffe (D), stated, “I don’t think parents should be telling schools what they should teach.” This statement is a shared opinion held by teachers, unions, and board members across the nation.

A memo from the National School Boards Association (NSBA) was sent to the Biden administration claiming that parents attending school board meetings were a threat to teachers and board members. As a result, the Department of Justice (DOJ) and Attorney General Merrick Garland ordered the Federal Bureau of Investigations (FBI) to investigate parents attending school board meetings as domestic terrorists. The federal government’s defamation of parents’ character is just the beginning of bringing the federal government into a more significant role in education. If the elimination of parental control in education occurs, then the states and the federal government can indoctrinate children without interference. Federalization can occur not only through the removal of parental influence, but also through financial control. Politicians such as U.S. Senator Bernie Sanders (D-Vermont) have long called for the federalization of funding. Complete federalization creates an oversight nightmare. This type of system would likely eliminate all local control within the schools.

Removal of God and Country:

The landmark decision of Engel v. Vitale (1962) removed school-mandated prayer from the classroom. It did not end there. Students have had a constant fight to keep student-led, voluntary prayer and Christian clubs in schools. However, we should be clear that the Left intends this ban to only include prayer to the God of the Bible. At the beginning of the school year, parents in California filed suit after the California State Board of Education unanimously approved a curriculum that included chanting to Aztec gods. These are the same false gods that the people of ancient Mesoamerica worshipped through the practice of human sacrifice. Schools have also removed anything that might resemble patriotism. One teacher, who has now been dismissed, removed the American flag and replaced it with the gay pride flag. Although this teacher was fired, many teachers across the nation are denouncing both God and our country in their classrooms.

The best reason to remove your children from the failing public school system is that they deserve better. The current system is rooted in hatred and indoctrination. Twenty years ago, Christian parents sent their children into the public system to be young evangelists. Today any possibility of that is squelched before the child even leaves the primary grades. Before they reach middle school, they will have already seen lewd images and been given ample opportunity to denounce all values their parents instill. Protecting our children means finding alternatives to public school that will support parental rights and values. We must develop our own systems that uphold Christian values. Whether it is home education, private schools, or church co-ops, now is the time to determine what option works best for your family and remove your children from the tyranny of government-run schools.