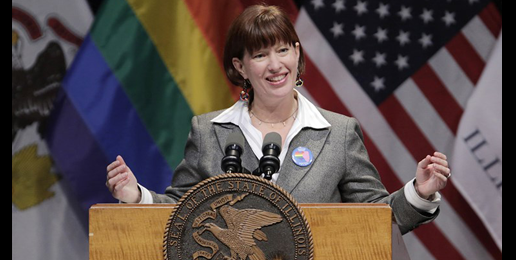 Here’s something many Illinoisans don’t know about the school sexuality-indoctrination bill created by Illinois’ premier homosexual and “trans” activist organizations: Equality Illinois and the Illinois Safe Schools Alliance (formerly part of the Gay, Lesbian and Straight Education Network).* This bill, which requires that the “teaching of history shall include a study of the role and contributions of lesbian, gay, bisexual, and transgender people in the history of this country and this state,” also mandates the following:

[N]o pupils shall be graduated from the eighth grade of any public school unless he has received such instruction in the history of the United States and gives evidence of having a comprehensive knowledge thereof.

Did you get that? Leftists in Springfield, controlled by outside organizations whose sole raison d’être is to transform the ontological, moral, and political beliefs of Americans, seek to require that children be inculcated with Leftist assumptions about deviant sexuality and be tested on them in order to move on to high school.

Exploiting taxpayer funds and captive audiences of children constitutes the most egregious form of propaganda imaginable. This outrageous effort to use children and public monies to advance a Leftist ideology must be opposed with the kind of fervor and tenacity usually demonstrated only by Leftists.

The bill also has a troubling section on the state’s textbook block grant program. This program, which historically provided textbooks to public and private schools—including Catholic schools—has not been funded for the past five years. If funding is restored and if the school sexuality-indoctrination bill passes, private religious schools would either have to forgo textbook-funding or use textbooks that include material that espouses positive views of disordered sexuality—views that violate both Catholic and Protestant doctrine.

If passed, the ideologically-driven school sexuality-indoctrination bill—also known deceptively as the “Inclusive Curriculum” bill (SB 3249  and HB 5596)—would require not only that k-12 teachers teach about the “roles and contributions” of homosexuals and those who reject their biological sex but also to tell students about the sexual predilections of those contributors. In other words, when teachers teach about the accomplishments of Sally Ride or the plays of Oscar Wilde, they would have to discuss their disordered sexual feelings and life choices as well. I wonder if Leftists will require that students be taught that Wilde’s first homosexual encounter was with a 17-year-old when Wilde was 32.

The goal of homosexual and “trans” activists is to use government school curricula to transfer the good feelings children and teens have about achievement to homosexuality and biological-sex rejection. That is decidedly not the role of public schools.

Teachers would also have to teach about the history of homosexual and “trans” activism. Because Leftists have been so effective at advancing their ideology by falsely claiming that homosexuality and biological-sex rejection are analogous to race, they are continuing with that false (and insulting to blacks) analogy by falsely claiming that “LGBTQQAP” activism is analogous to the Civil Rights Movement and must be taught as such to children.

Due to death, divorce, desertion, or disability, there are many families in which there is only one wage-earner who cannot afford private school tuition. Compassion for their plight and a commitment to stewarding how our taxes are used should lead Christians to actively oppose this bill with all its devilish details.

*(Note the dishonesty of these organizations’ names: They are about neither equality nor safety. Equality demands that we treat like things alike. Homosexuality is not like heterosexuality, and it’s not like race. And “safety,” as virtually everyone knows by now, has been redefined by homosexuals and those who masquerade as the opposite sex to mean absence of the expression of beliefs with which they disagree.)

Take ACTION: Click HERE to send a message to both your state representative and state senator, urging them to reject this effort to politicize curricula in order to advance biased beliefs about sexuality to children in government schools. Contact them repeatedly.