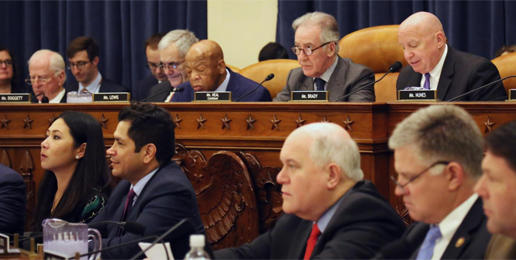 File this story in your now-bulging “Don’t Say You Weren’t Warned” folder.

Just three weeks ago, on September 19, 2019, the U.S. House Ways and Means Oversight subcommittee—chaired by John Lewis (D-GA) and composed of 7 Democrats and 4 Republicans—held a hearing portentously titled, “HOW THE TAX CODE SUBSIDIZES HATE.” Since conservative beliefs on sexuality are deemed “hateful” by regressives, such a subcommittee hearing should raise the alarm antennas of conservatives and libertarians concerned about assaults on the First Amendment by “progressive” thought police who roam the halls of Congress and the nooks, crannies, and interstices of social media.

What should also trouble them is that 3 of the 7 Democrats specifically mentioned or alluded to the Southern Poverty Law Center (SPLC) as their source for identifying “hate groups.” (Full, shameless, and cheerful disclosure: the Illinois Family Institute (IFI) has been erroneously listed on the scandal-pocked SPLC’s “hate groups” list since shortly after I began writing for IFI in 2008.) Less than two hours after the beginning of the hearing, the Oversight subcommittee tweeted this:

“[H]omosexuality is a poor and dangerous choice, and has been proven to lead to a litany of health hazards to not only the individuals but also society as a whole,” The American Family Association, Tax Exempt Hate Group.

The first of the five witnesses to testify was busy-beaver homosexual activist Brandon Wolf, a “nationally-recognized advocate for LGBTQ issues” and  “Central Florida Development Officer and Media Relations Manager” for Equality Florida who survived the horrific Pulse nightclub shooting in Orlando, Florida and said this:

[I]f you are not using everything at your disposal to snuff hate out, then you’re simply not doing enough. The time is now for us to fight harder, lead more courageously, and use everything we have to put an end to this cancer that is ravaging our communities…. Rather than use every tool at our disposal to combat hatred, we have chosen to subsidize it, embolden it…. Inaction in the face of hatred has consequences, and it’s high time that this Congress do something to protect those of us in the line of fire.

Wolf was urging Congress to use the IRS as a weapon to mow down moral views about homosexuality he hates and was doing so by deceitfully exploiting a tragedy that evidence suggests had nothing to do with “anti-gay” sentiment.

Mateen went to Pulse only after having scouted other venues that night that were wholly unrelated to the LGBT community, only to find that they were too defended by armed guards and police, and ultimately chose Pulse only after a generic Google search for “Orlando nightclubs” — not “gay clubs” — produced Pulse as the first search result.

Several journalists closely covering the Mateen investigation have, for some time now, noted the complete absence of any evidence suggesting that Mateen knew that Pulse was a gay club or that targeting the LGBT community was part of his motive.

By repeatedly emphasizing this anti-gay motive, U.S. media reports had the effect, if not the intent, of obscuring what appears to have been Mateen’s overriding, arguably exclusive motive: a desire for retribution and deterrence toward U.S. violence in Muslim countries.

Despite this mountain of evidence that strongly negates the original media-disseminated themes about Mateen’s life and his likely motive in targeting Pulse, the early myths remain lodged in the public mind and even in contemporary news reports. In part that’s because much of the evidence has remained under seal, in part because subsequent media debunking received a tiny fraction of the attention of the early, aggressively hyped inflammatory theories, and in part because there has been no political advantage to challenging the politically moving and useful narrative that the attack on Pulse was a hate crime against gay people.

Does anyone really believe full-time homosexual activist Wolf is unaware of this evidence?

Fortunately, one of the Republican members present at the hearing was Illinois’ own Darin Lahood (R-Peoria) who challenged references to the anti-Christian hate group, the SPLC:

[T]he IRS should not be used as a political tool to discriminate against organizations that differ in viewpoints…. We cannot use political disagreement as a metric to define hate speech or a hate group. This type of labeling can and has led to violent acts. I know my colleague just referenced the Southern Poverty Law Center. In 2012, an armed man named Floyd Lee Corkins walked into the Family Research Council Washington headquarters with the intent to shoot and kill as many of its employees as possible. He was apprehended, but not before wounding the non-profit’s business manager. Mr. Corkins later told the FBI that he had seen the nonprofit group listed as an anti-gay hate group on the Southern Poverty Law Center’s website.

Also testifying was UCLA law professor, the libertarian-esque Eugene Volokh who argued that with only very narrow exceptions, all speech is protected by the First Amendment:

The Supreme Court has repeatedly made clear that tax exemptions can’t be denied based on the viewpoint that a group communicates…. The Court has also made equally clear that excluding speech that manifests or promotes “hate” is forbidden viewpoint discrimination…. The law may treat groups differently based on their actions, but not based on the views they express…. Groups may be denied tax exemptions for deliberately engaging in speech that falls within one of the few narrow exceptions to the First Amendment, such as true threats of criminal attack, or incitement intended to and likely to cause imminent criminal conduct. But “hate speech” writ large doesn’t fall within any such exceptions.

Our First Amendment rights will not long stand against the sexual appetites of the deviant who run amok among us. Neither our constitutionally protected religious free exercise rights, nor our speech rights, nor our assembly rights will be protected now that they have been subordinated to subjective and disordered sexual desires. And neither will our intrinsic privacy rights remain protected. Cultural critics warned about the dangers posed to this once-great Republic by 1. allowing the terms “sexual orientation” and “gender identity” to Guinea-worm their way into anti-discrimination policies and laws, and 2. the Obergefelle U.S. Supreme Court decision, which has been interpreted as legalizing same-sex marriage everywhere in the United States. But conservatives largely dismissed such warnings out of either a failure to think deeply about the implications of these changes or cowardice or both.

Leftists are turning—not turning right—turning against the U.S. Constitution, and slowly they’re coming, step by step, straight for the First Amendment.

Take ACTION: Click HERE to send a message to your U.S. Representative to ask him/her to reject the SPLC’s definition of “hate groups,” which includes conservative and faith-based groups, such as IFI and AFA. Traditional Judeo-Christian teaching about human sexuality is neither “hateful” nor “vile.” Ask them to stand up for the First Amendment and protect religious liberty and speech rights by rejecting this effort to penalize so-called “hate” speech.