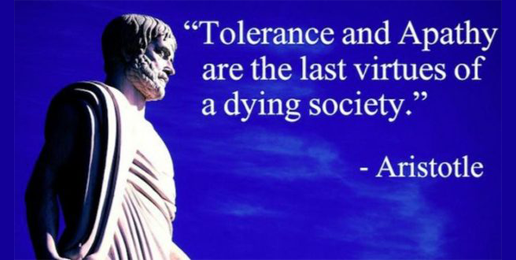 Leftists Have Intolerance and Bigotry All Wrong
Written By Laurie Higgins   |   06.12.19
PRINT

In light of being accused of “intolerance” and “bigotry” on IFI’s Facebook page by purportedly tolerant and unbigoted “progressives,” I think some clarification of the meaning of tolerance and bigotry is in order. And while I’m at it, I’ll say a little sumpin’ sumpin’ about anger—again.

Save this. You may need it.

The first definition of “tolerance” in the Oxford English Dictionary is “the action or practice of enduring pain or hardship; the power or capacity of enduring.” Another definition is “the disposition to be patient with or indulgent to the opinions or practices of others; freedom from bigotry or undue severity in judging the conduct of others.” The American Heritage Dictionary defines “tolerate” as “to put up with.”

Note too the qualifier “undue.” Someone who judges conduct to be immoral is not guilty of intolerance even if the judgment is severe. Only if it’s unduly severe is one guilty of intolerance. Leftists aren’t faulting conservatives for “undue severity” of judgment. They’re faulting conservatives for making any negative judgments about homosexual acts, cross-dressing, and other efforts to conceal one’s sex.

A “bigot” according to the Merriam Webster Dictionary refers to a person who is “obstinately or intolerantly devoted to his or her own opinions and prejudices; especially: one who regards or treats the members of a group (as a racial or ethnic group) with hatred and intolerance.” Clearly, there is a distinction between bigotry and moral views. Bigotry cannot simply refer to holding opinions or being in possession of moral precepts, for if it did, everyone but sociopaths would have to be considered bigots because everyone but sociopaths holds certain behaviors as moral and others as immoral.

In addition, the word “obstinacy” in the definition of “bigot” warrants some discussion. First, “obstinate,” according to The American Heritage Dictionary, connotes “unreasonable rigidity.” I would argue that conservative views on homosexuality are completely reasonable, and that conversely, liberal views are woefully unreasonable.

In order to determine whether a tenaciously held conviction reflects obstinacy requires an evaluation of the content of the belief and the justifications for that belief. For example, very few would characterize the act of consistently, tenaciously, unrelentingly, and enduringly, holding the belief that infantilism, pedophilia, polyamory, genocide, racism, or female genital mutilation is wrong to be a manifestation of obstinacy or bigotry. Rather, holding unwaveringly to the moral conclusions that these behaviors are wrong represents legitimate and essential moral judgment.

Moreover, “obstinate” cannot be severed from the other parts of the definition. Bigotry is the obstinate devotion to uninformed or unintentional inclinations, especially ones that result in hatred of members of a particular group.

As such, moral views, even negative views, informed by reading diverse resources and thoughtful deliberation do not constitute bigotry.

Further, a bigot not only holds uninformed opinions but “regards or treats the members of a group… with hatred and intolerance.” Certainly, there are those in society who demonstrate this kind of behavior—including homosexual and “trans” activists—but any who have truly submitted their lives to Christ, do not treat anyone with hatred.

I, like countless other theologically orthodox Christians, not only do not treat people who self-identify as homosexual or “trans” with hatred or intolerance, but I also do not feel any hatred for them. My beliefs about homosexual conduct in no way diminish the love I feel for those who self-identify as homosexual or “trans,” the respect I have for their admirable qualities, the pleasure I take in their company, or the recognition I have of their infinite worth.

I do, however, often feel anger that adults are promoting body- and soul-destroying lies as truth to children. And I thank God for this proper feeling toward such iniquity.

In an article in Touchstone Magazine on “the Integration of Anger into the Virtuous Life,”  Dr. Leon Podles argues that “Christians have a false understanding of the nature and role of anger. It is seen as something negative, something that a Christian should not feel.”

This false understanding infects the church and prevents it from being salt and light in a fallen, suffering world, and that renders the church complicit in the destruction of countless lives.

He expresses what should be obvious: we should “feel deep anger at evil, at the violation of the innocent, at the oppression of the weak.”

Podles describes the suppression of hatred and anger as “emotional deformation” and exhorts the church to remember that “growth in virtue,” which must include the integration of “all emotions, including anger and hate,” is the “goal of the Christian’s moral life.”

Dr. Podles quotes Catholic psychiatrist Conrad Baars who had been a prisoner under the Nazi regime:

‘[T]here is a difference between a person who knows solely that something is evil and ought to be opposed and the one who in addition also feels hate for the evil, is angry that it is corrupting or harming fellow-men, and feels aroused to combat it courageously and vigorously.’

How often do we hear in our churches anything akin to the idea expressed by early church father John Chrysostom:

‘He who is not angry, whereas he has cause to be, sins. For unreasonable patience is the hotbed of many vices, it fosters negligence, and incites not only the wicked but the good to do wrong.’

Wouldn’t the church and society look very different if they embodied Dr. Podles’ conviction that “sorrow at evil without anger at evil is a fault.”

Regressives in Springfield Attack IFI and IFA
b
a
x
r