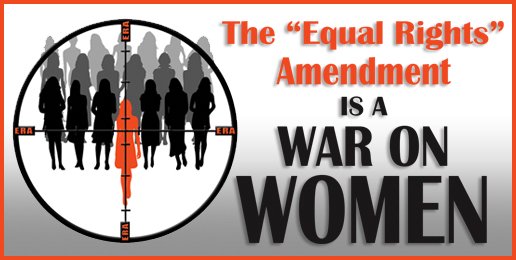 Who isn’t for equal pay for women? Proponents of the ERA claim that’s what it’s about, but that couldn’t be farther from the truth.

“Equality of rights under law shall not be denied or abridged by the United States or any state on account of sex. The Congress shall have the power to enforce by appropriate legislation the provisions of this article. This Amendment shall take effect two years after the date of ratification.”

Notice that “women” isn’t in the text? That’s because it’s not at all about equal rights for women. It’s about eliminating all legal distinctions between sexes.

There are many more reasons to oppose the ERA, but here are 10.

Proponents Ignore the 1979 Ratification Deadline — Congress granted an extension to 1982 which was ruled unconstitutional by a U.S. District Court in 1981 and the case went to the U.S. Supreme Court. On October 4, 1982, the Court dismissed it as moot, stating, “The amendment has failed of adoption no matter what the resolution of the legal issues presented here.” Additionally, no states passed ERA during the time extension.

Liberal Feminists Have Misled the Public on True Intentions – The 14th Amendment to the U.S. Constitution guarantees equal protection for everyone. Women have used this amendment successfully in discrimination cases and will continue to do so. For well over 30 years “equal pay” has been law. This means paying the same wages for people who do the same work. However, differing wage earnings are based upon different factors such as: job experience, risk/danger involved, seniority, level of training, and other factors – not because of discrimination.

It Will End Social Security Benefits for Spouses — According to U.S. Supreme Court Justice Ruth Bader Ginsburg’s book Sex Bias in the U.S. Code, the ERA will change 800 federal laws including the elimination of social security benefits for wives and widows. (pages 206, 211-212) “Equality of rights under law shall not be denied…on account of sex.”

It Will Force States to Pay for Abortion — In Doe v. Maher, on April 9, 1986, the Connecticut Supreme Court stated, “Since only women become pregnant, discrimination against pregnancy by not funding abortions…is sex-oriented discrimination…The Court concludes that the regulation that restricts the funding of abortions…violates Connecticut’s Equal Rights Amendment.” In New Mexico Right to Choose, NARAL, et al v. Johnson, the New Mexico Supreme Court ordered the state to pay for Medicaid abortions, saying the state could not differentiate between abortions and medical procedures sought by men. “Equality of rights under law shall not be denied…on account of sex.”

It Will Force Women into Combat — “Not only would women, including mothers, be subject to the draft, but the military would be compelled to place them in combat units alongside of men … (U.S. House Judiciary Committee Report (No. 92-359, July 14, 1971). “Equality of rights under law shall not be denied…on account of sex.”

It Will Eliminate Child Support — “…[I]t could relieve the fathers of the primary responsibility for the support of even infant children, as well as the support of the mothers of such children…” (U.S. House Judiciary Committee Report (No. 92-359, July 14, 1971). “Equality of rights under law shall not be denied…on account of sex.”

It Will Invalidate Legal Privacy Protections — The ERA would be used to invalidate any laws or policies that prohibit men and women suffering from Gender Dysphoria from using restrooms, locker rooms, and dressing rooms designated for the opposite sex. “Equality of rights under law shall not be denied…on account of sex.”

It Will Give More Power to Federal Government — Section II of the ERA states that “The Congress shall have the power to enforce by appropriate legislation the provisions of this article.” This would give enormous new powers to the Federal Government that now belong to the states.

State and Local Laws Favoring Females Would be Unconstitutional – Areas of law which include traditional differences of treatment “on account of sex” would be challenged and declared unconstitutional. Laws including marriage, divorce, family-property law, child custody, adoptions, abortions, alimony, some criminal laws, age limits for marriage and the age of consent, public and private schools, prison regulations, and insurance rates, veterans benefits, boy and girl scouts, tax exemptions for single-sex schools would be challenged if ERA is passed. “Equality of rights under law shall not be denied…on account of sex.”

Take ACTION:  Click HERE to email your lawmakers to urge them to oppose the ERA, SJRCA 4.

Please also make a call to reinforce the point. To find your lawmaker’s names and numbers, click HERE. Once you fill in your zip code and address, a screen will appear with your elected officials. Your state rep is the very last one. Your state senator is just above. Click on their names for contact information.