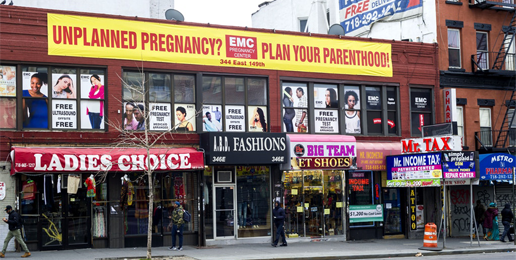 The Thomas More Society filed a complaint in federal court stating that both the state of New York and New York City are discriminating against pro-life advocates.

The complaint, which was filed Jan. 21, 2020 on behalf of Evergreen Association, Inc., accuses the State and City of New York of disregarding the charitable organization’s First Amendment rights. Evergreen operates maternal health and pregnancy centers under the names “Expectant Mother Care” and “EMC Frontline Pregnancy Centers.” The Complaint for Declaratory and Injunctive Relief was filed in the U.S. District Court for the Southern District of New York.

Chris Slattery, Director of EMC Frontline, described the discrimination: “We are all about saving the unborn lives threatened by abortion. Thus, we are all about offering alternatives to abortion. New York’s discriminatory laws undermine our charitable mission. How could we in good conscience hire someone who advocates abortion to encourage expectant mothers not to pursue that deadly route?”

According to a media release from the Thomas More Society, the complaint charges discrimination against pro-life organizations in the following ways:

In a public radio program in Jan. 2014, New York Governor Andrew Cuomo denounced pro-life advocates as “extreme conservatives,” saying that “they have no place in the state of New York.” Despite repeated calls for him to apologize, the governor has refused. In the same pattern, the Thomas More Society states, “A recent string of New York attorney generals has sought to silence peaceful citizens offering abortion-bound women information on life-affirming alternatives.”

In remarks about the legislation, Thomas More Society Special Counsel Timothy Belz stated, “This is especially egregious when you consider that the law was packaged with other bills specifically designed to strip away any regulation of abortion. New York’s ‘Boss Bill’ was passed in tandem with the state’s Reproductive Health Act, which legalizes abortion until the birth of the child, and the Comprehensive Contraception Coverage Act, which requires health insurers to provide no-cost birth control, including abortifacient drugs, in their health plans.” In Illinois, the Reproductive Health Act (SB 25), passed by the General Assembly at the end of the spring 2020 session, also requires all employers in the state to provide no-cost birth control and abortions up to nine months in their health plans.

According to the Thomas More Society release, “The case challenges the constitutionality of New York’s so-called ‘Boss Bills,’ laws that make support of abortion a protected class in the employment nondiscrimination laws of both New York State and New York City, thus forbidding employers from making hiring and promotion decisions  based upon ‘reproductive health’ decisions of employees or applicants, including the decision to have or promote abortions. The laws pose existential threats to pro-life organizations because they impose debilitating fines and also provide for statutory damages.”

Belz explained, “These laws violate our client’s rights in multiple ways. Expectant Mother Care and EMC Frontline exist for the purpose of advocating for and providing desperate women with alternatives to abortion. Forcing them to hire someone who promotes abortion would completely undermine their mission.”

“It’s ludicrous,” said Belz, “and tramples all over Expectant Mother Care and EMC Frontline’s right of expressive association guaranteed by the First Amendment. These state and city laws also violate our client’s right to free speech and right to due process. Finally, the state’s failure to define ‘reproductive health decision making’ makes the laws unconstitutionally vague.”

The Thomas More Society is a not-for-profit law firm headquartered in Chicago and Omaha, dedicated to restoring respect in law for life, family, and religious liberty.

To read the complaint visit https://www.thomasmoresociety.org/wp-content/uploads/2020/01/Complaint-for-Declaratory-and-Injunctive-Relief-1-16-20.pdf.

29 States and D.C. Permit Abortions of Healthy, Full-Term Babies
b
a
x
r