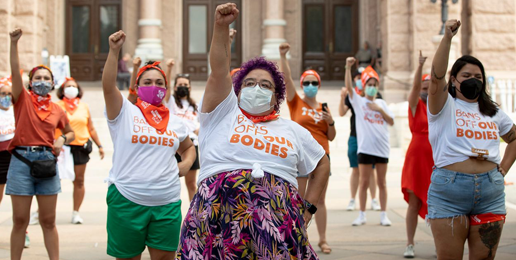 For those who have been enjoying the waning days of summer away from news and social media, basking maskless by a refreshing body of water or hiking in a cool forest with a face as naked as a newborn babe’s, here’s what set ablaze the perpetually burning neurons of leftists: Texas banned all abortions performed on small humans whose hearts are beating and made anyone who facilitates the illegal killing of humans with beating hearts open to litigation. Sounds reasonable to me, but then again, I’ve never been a fan of killing defenseless humans who have committed no crime.

Following Texas’ prohibition of human slaughter after the first six weeks of life, the left lost what’s left of their minds.

With their feticidal minds unhinged at the prospect of mothers not being free to hire hitmen who identify as “physicians” to off their offspring, leftists proved again why they’re not known for skill in the use of evidence, sound analogical thinking, respect for science, respect for human rights, coherence, consistency, or morality.

Let’s take a cursory look at the darn things cultural regressives are muttering, sputtering, and tweeting:

Joe Biden, the self-identifying Catholic who claims his “avocation” is theology, recently said,

I’m prepared to accept that at the moment of conception there’s human life and being, but I’m not prepared to say that to other God-fearing, non-God-fearing people that have a different view.

So, which is it? Does he believe that at the moment of conception a new human life comes into existence or does he not? If not, what new science convinced him between age 72 and 78 that the union of human egg and sperm no longer marks the beginning of the life of a new human being?

(As an aside, why can’t leftists who claim to believe that women can be born in men’s bodies and that men can menstruate and give birth be like Biden and respect the views of God-fearing and non-God-fearing people who disagree?)

Growth is rapid this week [sixth week]. Just four weeks after conception, the neural tube along your baby’s back is closing. The baby’s brain and spinal cord will develop from the neural tube. The heart and other organs also are starting to form and the heart begins to beat.

Please note, the Mayo Clinic refers to the baby as a “baby.”

CNN’s Joy Reid fretted that the Texas law signals the Handmaid’s Tale is coming to America—you know, the story of fertile breeding women being forced to have sex with ruling elite men while their wives watch. Reid’s guest, failed presidential candidate Elizabeth Warren, nodding in agreement, fretted about the law’s impact on the “most vulnerable among us”:

Warren views pregnant “transpersons” who are workin’ three jobs as more vulnerable than the babies whom they seek to kill.

I suggest that all women refuse to have sex with men until they are guaranteed the right to choose by Congress.

Midler forgot to specify the direct object of the transitive verb “choose.” To be clear, she means the right to choose to have incipient human life killed.

I completely agree with Midler that if a woman plans to chemically starve her baby fetus or have her fetus dismembered as her back-up contraception plan, it’s best she not have sex.

Millionaire leftist co-founders of the ridesharing company Lyft, Logan Green and John Zimmer, have gone all out in support of killing tiny humans:

Lyft is donating $1 million to Planned Parenthood to help ensure that transportation is never a barrier to healthcare access.

Killing humans is not “healthcare” no matter how many times leftists use this Newspeakian euphemism. Anyone who cares about the health of womb-dwellers ought not use Lyft.

And any leftist who believes that practices that have a “disparate impact” on persons of color are racist practices should know that black babies are killed in utero at much higher rates than are white babies:

Black women have been experiencing induced abortions at a rate nearly 4 times that of White women for at least 3 decades, and likely much longer. … In the current unfolding environment, there may be no better metric for the value of Black lives.

The millions of dollars donated by racists Green and Zimmer are going to facilitate the racist practices of Planned Parenthood.

The ever-snippy White House spokesperson Jen Psaki scolded a reporter for asking about how Biden reconciles his Catholic faith with his support for human slaughter. Psaki’s retort was revelatory in that it demonstrated how un-woke she is.

Without even asking for the reporter’s pronouns, Psaki just assumed the reporter was a man, presumably because he looks like a man and sounds like a man. Psaki asserted presumptuously that the reporter has never been pregnant. How does she know? Doesn’t Psaki know that in the woke playbook, some women have men’s bodies, and some men have women’s bodies and can get pregnant? I guess Psaki is an intolerant, hateful, ignorant bigot.

CNN legal analyst Jeffrey Toobin claimed that the refusal of the U.S. Supreme Court to block the Texas law constitutes “a real blow against the U.S. Supreme Court’s institutional reputation.”  It’s strange to hear Toobin, who pleasured himself on a work Zoom call, express concern over “reputation.” But then again, Toobin has a vested interest in keeping abortion legal: He pressured a former paramour with whom he had had an extramarital affair to abort their now 12-year-old son. Toobin may be planning for his future “needs.”

One law professor who has no need of constitutional grounding for abortion is UC Irvine law professor and cheerleader for legalized human slaughter, Michele Goodwin. Goodwin is a long-time and influential advocate of the legal right to kill the preborn. She and co-author Erwin Chemerinsky set forth their goals in a 2017 paper titled, “Abortion: a Woman’s Private Choice”:

We begin by justifying the protection of rights not found in the text of the Constitution. … Foremost among these rights is control over one’s body and over one’s reproduction. … Finally in Part III we discuss what it would mean for abortion to be regarded as a private choice. In this Part, we identify three implications: a) restoring strict scrutiny to examining laws regulating abortions, which would mean that the government must be neutral between childbirth and abortion; b) preventing the government from denying funding for abortions when it pays for childbirth; and c) invalidating the countless types of restrictions on abortion. (emphasis added)

Goodwin rightly condemns the “notorious eugenics period in the United States,” in which allegedly defective preborn babies were forcibly killed by the government. Goodwin fails, however, to acknowledge the difference between the government mandating that a doctor perform a surgical procedure on the body of a woman without her consent and the government prohibiting a doctor from dismembering or in other ways destroying the body of a human fetus without his or her consent.

Goodwin also believes the Texas bill to preserve human life is analogous to the Fugitive Slave Act. She believes that the grotesque law that incentivized citizens to help send humans into bondage is analogous to a law that incentivizes citizens to help prevent the slaughter of humans. Some might counter that the Texas law is more akin to laws that offer rewards for the capture of killers than it is to the Fugitive Slave Act.

Now that leftists have lost control of the U.S. Supreme Court, they’re stomping their angry feet and demanding the Court be jampacked with leftists, something conservatives have not called for to repair the grievous harm done by seven Justices in 1973. Neither the Constitution nor the will of the people matters to “progressives.”

There is no constitutional or moral right to have humans killed because of their dependency status, location, absence of self-consciousness, lack of full development, disabilities, anticipated future, maternal inconvenience, insufficient maternal finances, or crimes of their fathers. A civilized, compassionate, moral, and just society does not find the final solution to poverty, disease, disability, or any other form of human suffering in the killing of others. And in the Constitution, there is no free-floating absolute right to privacy in which humans can do anything they feel like doing to other human beings. Leftist U.S. Supreme Court Justices invented such a “right” out of whole blood-stained cloth.