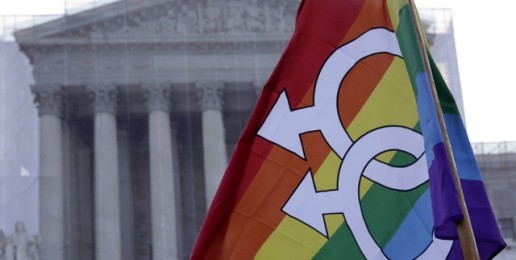 A few weeks ago managers inside the United States Justice Department received a memo titled: “LGBT Inclusion at Work: The Seven Habits of Highly Effective Managers.” It was sent in advance of “Lesbian, Gay, Bisexual and Transgender Pride Month.” One of the instructions to the managers cited the need to verbally affirm the lifestyle of these individuals. It read: “Don’t judge or remain silent. Silence will be interpreted as disapproval.”

This is where this issue is headed in government and perhaps in the private sector. Forced affirmation of other people’s lifestyle choices or else. This leads me to the U.S. Supreme Court decision earlier this week regarding homosexual marriage. Before the Court was the amendment of the California (Prop 8 ) Constitution which seven million Californians passed but which was not defended in federal court by the governor of the state and was struck down by one federal judge. The Court said the attorney who argued before them on behalf of the people (since the governor did not) did not have legal standing thus the lower court’s ruling stood. The bottom line is same-sex marriage is now legal in parts of California, but the ruling did not strike down the other amendments defining marriage as between one man and one women which have passed in over 30 states.

The Court did overturn the 1996 Defense of Marriage Act passed by congress and signed into law by President Clinton which defined for federal purposes that marriage was only between one man and one woman. It would take be too long to dissect that decision here.

But the larger issue here is, again, where this all is headed. The political and social agenda of the LGBT movement is now starting to collide with the freedom of religion guaranteed all Americans in the U.S. Constitution. Here are a couple of recent examples of this:

In response to the lawsuit in Washington, the owner of Arlene’s Flowers posted this on her Facebook page: “I could not [provide the flowers] because of my relationship with Jesus.” She added: “I have hired all walks of people in different circumstances, and had the privilege of working with some very talented people that happen to be gay. I’m sure there are many places you can purchase flowers, if you choose not to purchase them from Arlene’s, because of your beliefs, then I certainly understand.”

I did many media interviews this week on the Supreme Court’s decisions including National Public Radio, USA Today and the Washington Post. I appreciate these media outlets giving me an opportunity to give our perspective. This issue will be in the public for some time to come, but some court followers do not believe that the justices are eager to take up a case directly challenging the right of states to define marriage for themselves. At least not anytime soon.

Rest assured, AFA and IFI will continue to hold high the biblical definition of marriage as the only definition of marriage that the government should recognize. AFA has been a large part of seeing the marriage amendments pass in state after state the last decade. We have labored long and hard on this issue because it is one that matters to God.

Dhimmitude in America?
b
a
x
r