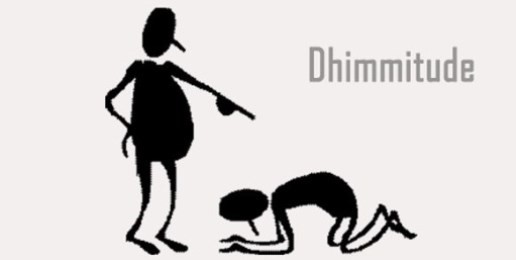 You may not know what dhimmitude is and hopefully you never experience it.

But you’ve probably heard of ISIS (the Islamic State of Iraq and Syria) and you’re almost surely aware of what Christians are.

Dhimmitude is an Islamic system that governs non-Muslims who have been conquered through Jihad by folks like ISIS.

If you surrender to Muslim control – though not Muslim – you are referred to as dhimmi.

If ISIS took over the town you live in, they might move door to door and give you three options: “convert to Islam, pay the jizya, or die.”

The jizya is a tax for not being Muslim.

It doesn’t apply to everyone, but paying it is seen as proof of your subjection to the Jihadist state and its laws. In return, non-Muslim subjects are permitted to practice their faith, to enjoy a measure of communal autonomy, to be entitled to the Muslim state’s protection from outside aggression.

Acknowledging the difference, there are parallels between the way Jihadists treat those who are in dhimmitude and the way the new sexual revolution in America seeks to treat those who disagree with their (religious?) beliefs about sexuality and marriage.

Once they have political power, they are giving businesses three options “convert, pay a fine, or die” (economically, not physically).

After Arlene’s Flowers was sued for declining to decorate for a same-sex wedding, Attorney General Bob Ferguson offered to settle (demanded the jizya) for $2,000 on the condition that she would “convert,” or agree to make business decisions according to the state’s new values.

Only a few days ago, a judge in Oregon fined a bakery $135,000 because they attempted to run their business according to their Christian beliefs about sexuality rather than the government’s. When they rejected the government’s demands that they convert or pay the jizya, the government opted for what amounts to the economic death penalty.

“Nonsense,” you argue. “They broke the law. Having penalties for breaking the law isn’t exactly innovative. Nor is it jihadist.”

But the left’s new found impulse to be sticklers for the letter of the law misses the larger point.

The left is proposing a regime change that fundamentally alters freedoms that have been taken for granted for in America for centuries.

Christians, Jews, Muslims and others have been not participating in same-sex “weddings” for millennia.

But under the new regime, doing what has always been done is illegal.

Your choice. Convert, pay a fine if you refuse to convert and then convert, or experience economic death.

Like the jizya, the non-discrimination law discriminates.  It protects one person’s right to decline to participate in an activity they disagree with, but denies that right to others.

The good news is that if you accept the terms of the new regime, you will still be allowed a measure of communal autonomy, and be entitled to other benefits from the state.

Imagine a new law compelling church attendance or pork consumption on the grounds that refusing to participate is discriminatory. (Which, of course, it is. But that’s the kind of discrimination lefties still like.)

Being indignant with the atheist who objects to compulsory church attendance would be stupid since he’s simply doing what atheists have always done.

“But it’s the law,” you say, self-righteously.

“But it shouldn’t be the law, and you should know better,” he says in response.

And of course he’s right.

The way non-discrimination laws are being interpreted right now is not a modification to the building code that frustrates some builders or a change in the speed law that catches unsuspecting drivers.

It is a regime change that seeks to fundamentally alter the way Americans have always lived. It seeks to create the kind of conformity that America was created in opposition to.

America doesn’t and shouldn’t have conquered peoples. We make room for the atheists, Christians, Muslims, or Jew to be who they are, not just in their preferred place of worship, but in the rest of their life as well. We respect the right for people to be who they are, even if we think they’re silly and ignorant. We understand that we’re different and we make room for that.

Dhimmitude is for jihadists, not for Americans.

This article was originally posted on the blog of the Family Policy Institute of Washington.