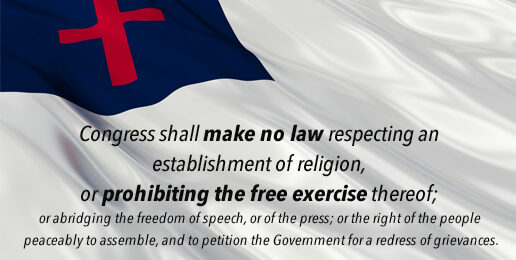 Written by James A. Davids

But when a group that gives speeches on the Judeo-Christian heritage of our country asked to fly the Christian flag while it used the plaza, Boston said “no.”  Why?  Solely because it was “religious.”

The U.S. Supreme Court recently has reiterated that a governmental entity may not treat a religious organization worse than other organizations simply because it is religious. Boston obviously is violating that principle. The city’s excuse for this discrimination is that if it allows the Christian flag to be flown temporarily in front of city hall, people might think that the city was promoting Christianity. Any objective observer, however, would know that the Christian flag was only one of hundreds of flags that the city had allowed to be displayed temporarily by various groups. When the Portuguese flag was flown for a few hours, no reasonable person would have thought Boston was now pledging allegiance to Portugal; similarly, no reasonable person would have thought Boston was establishing Christianity as the city’s preferred religion.

The main significance of the case is that it provides the Court another opportunity to dispense with the suggestion—one much in favor among some—that the Establishment Clause somehow justifies limiting the free exercise of religion.  In our view, which is shared by the nine other organizations that joined this brief, both Religion Clauses are pro-religion, not hostile to it. Boston’s animosity to the Christian flag will hopefully be taken as an opportunity by the Court to shut the book on this improper reading of the U.S. Constitution.

The U.S. Supreme Court will hear arguments on this case on January 18.

Do Christians Regularly Violate the Separation of Church and State?
b
a
x
r