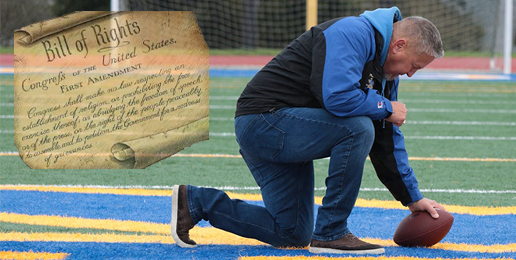 IFI, along with the Billy Graham Evangelistic Association, Concern Women for America, and thirteen other Christian organizations, filed an amicus brief with the U.S. Supreme Court this week in favor of Coach Joe Kennedy, who was fired from a public school in Washington State because he prayed briefly at the 50-yard line after football games.

Coach Kennedy is a man of deep faith who has been saying a brief prayer following his team’s football games for years. Initially he did so alone, but then some students and other coaches freely chose to join in. When the school learned what he was doing, it demanded he stop, but he felt responsible to thank God for the games in that way. As a result, he lost his job.

The issue before the high court is whether the speech and religious liberty rights provided by the First Amendment protect Kennedy’s brief prayer following games and whether the Establishment Clause justifies his dismissal, as the school district has argued. In recent years, SCOTUS has interpreted the Establishment Clause to foster neutrality towards religion. Our amicus brief in this case argues that,

[The Establishment Clause] states that “Congress shall make no law respecting an establishment of religion.” It obviously does not prohibit any governmental action about or allowing religion. If it did, the Constitution would be at war with itself. Indeed, the very next phrase of the First Amendment protects the “free exercise” of religion, an obvious endorsement of religious observance by affirmatively protecting it. The Establishment Clause, by forbidding the government to establish religion, has the effect of reinforcing the private exercise of religion. The restraint on “an establishment” does not trump or supersede the belief or practice of religion. “Government does not establish religion by leaving its private exercise alone.”

The First Amendment is pro-freedom of speech, pro-freedom of press, and pro-freedom of assembly. It accomplishes those purposes by providing that “Congress shall make no law … abridging” those freedoms. Similarly, the First Amendment is pro-religious observance, not hostile to it in one clause and in favor of it in another. And while the operation of the clauses may overlap, by their very nature and purpose they do not contradict each other when, as here, the state does not initiate, and acts neutrally in accommodating, the private exercise of religion.

A short prayer following a game, joined in by only those who want to be there by their own free will, hardly amounts to an establishment of religion, particularly when the school makes it clear that it has nothing to do with Coach Kennedy’s activities.

Oral arguments for this case are expected in April.

Take ACTION: Please keep this case, the Justices, and their clerks in your prayers. Pray that religious freedom and the free exercise of that liberty will be upheld by the Court.