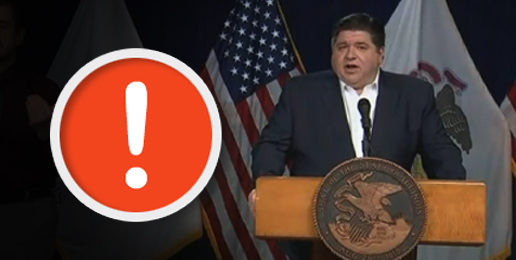 On March 9, Governor J.B. Pritzker issued his first “stay-at-home” emergency Executive Order (EO). That was followed by another EO extending his stay-at-home order through April 30th. Then last week, Gov. Pritzker extended his stay-at-home order for another 30 days, through the end of May. If not extended again, that would constitute a total of 11 weeks of a lock-down for Illinois residents and businesses.

Since Illinois law only grants the governor emergency authority for a period of 30 days, the extensions of Gov. Pritzker’s “stay-at-home” order, which closes businesses and forbids church services and assemblies in excess of ten citizens, constitutes an overreach of executive authority. Thankfully, State Representative Darren Bailey (R-Louisville) took Gov. Pritzker to court over this very issue and won an important decision that may lead to a definitive strike-down of the governor’s dangerous precedent. In fact, Clay County Circuit Court Judge Michael McHaney was reported as saying that Gov. Pritzker’s “subsequent executive orders ‘shredded the Constitution.’” The governor has promised to appeal this decision, so it may not be resolved anytime soon.

Gov. Pritzker and state lawmakers need to hear from their constituents about the abuse of power and the infringement of our civil liberties.

Take ACTION: Click HERE to send a message to Gov. Pritzker and your state lawmakers asking them to end the lock-down and restore our civil liberties. Consider pointing out that our First Amendment rights to freely exercise our religion and to assemble in our churches are essential.

In fairness to Gov. Prizker, the state’s initial response was part of his administrative effort to slow the spread of the disease and “flatten the curve” of COVID-19 hospitalizations. Yet over the past 6 weeks we have learned a lot about the COVID-19 pandemic. For one thing, the initial government predictions of hospitalizations and deaths were wrong. Thank God that these projections have been repeatedly revised downward but, unfortunately, not before contributing to the incitement of great fear and anxiety.

In Illinois, we have not come close to exceeding hospitalization and healthcare capacity. An excellent article by Wirepoints provides evidence of the adequacy of ICU bed capacity and ventilator availability.

Three weeks ago, Governor Pritzker stood before the media complaining about the Trump administration and our great need for ventilators, ICU beds, and other medical equipment. He was wrong. Illinois didn’t use half of the available ventilators and only two-thirds of available hospital beds.

The facts that have emerged over the past few weeks do not warrant Gov. Pritzker’s extended “stay-at-home” order. So, it is not surprising that his announced plans to extend the Illinois lock-down through the end of May is provoking a growing “enough is enough” response.

Has the Governor lost his mind! How in the world could he possibly think of continuing a statewide lockdown when Cook County and Chicago are 70% of the positive cases, while 84 counties have less than 100 positives of which 75 have less than 50 positives. Just what will it take to convince Pharaoh Pritzker to let people in most of Illinois go!

A cursory review of the EO (and extension) reveal clear – although potentially justified – infringements on the constitutional rights of Illinois citizens. See Article I, §2 (the State due process clause); Article I, §3 (religious freedom, including “mode of worship” protection); Article I, §5 (right to assemble and petition); Article I, §15 (right of eminent domain); and Article I, §24 (rights retained).

Article I, §23 also specifically accounts for citizen’s being responsible for their actions to preserve liberty, as follows: “A frequent recurrence to the fundamental principles of civil government is necessary to preserve the blessings of liberty. These blessings cannot endure unless the people recognize their corresponding individual obligations and responsibilities.” Implicit in §23 is idea that emergencies may require adherence to individual responsibility rather than suspension of Constitutional rights.

From a strict enforcement standpoint, although well-intentioned on an emergency basis, the EO is very broad and does not appear to meet strict scrutiny – this is not to mention the EO appears to be beyond the framework of the specific Act it cites as support.

Illinoisans must awaken to the truth: the governor’s edicts infringe on our God-given, unalienable rights as set forth in our federal and state constitutions.

Calls and email messages to state lawmakers are vital. Too many politicians are keeping their heads down and have not challenged the abuse of power by the Pritzker administration. They are simply afraid of the media and the negative coverage they may receive as a result of being outspoken. Calls to these lawmakers are needed to get them off the sideline and into the fray. They need to be emboldened.

Our grand experiment in liberty, built firmly on Judeo/Christian (Biblical) truths and values, calls for servant leaders whose fallen human natures were reined in by a system of checks and balances. Let’s return to that vision and fight for the liberty our forefathers bled and died for.

Now is not the time for silence but for mighty prayers and grassroots action.