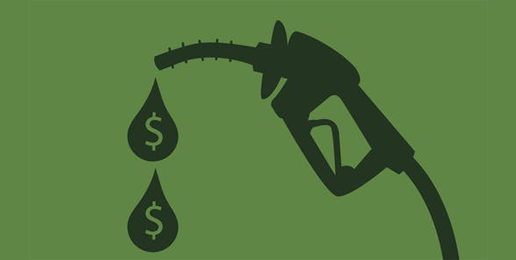 Lawmakers in Springfield Looking to Pump up the Gasoline Tax
05.16.19
PRINT

If there is one freedom which we Americans have embraced since the invention of the automobile, it is the freedom to move about as we please. Whether it’s getting to and from work, driving our children to school, running to the grocery store, or taking a family vacation, our cars are a huge part of our lives.

There are those of us who rely on our vehicles to make a living, whether it’s someone using their own private vehicle to deliver food, or as a Lyft or Uber driver. Many companies and private businesses also rely heavily on their fleets of vehicles to deliver goods to and from distributors, suppliers and their own customers. But if one state lawmaker has his way, all of us will once again be facing an increased tax burden at the gas pump.

As if we didn’t already have enough increases on gas prices, here comes the state once again, picking our pockets. Every time the state needs more money, and that just happens to be always, they come at us with taxes, taxes, and more taxes.

As the Chicago Tribune reported, legislation introduced recently by State Senator Martin Sandoval (D-Chicago) would more than double the state’s gas tax to 44 cents a gallon. Furthermore, the driver’s license fee would double to $60.00 and vehicle registration fees would rise to a whopping $148,00. That’s twice what each fee costs now!

If these taxes and fees do indeed increase, those who own electric cars would feel the biggest shock of all. Do you realize that these increases would bring the registration fee for electric vehicles from $17.00 all the way to an astronomical $1,000.00? Talk about shocking!

In response to this legislative proposal, State Representative Allen Skillicorn (R-Crystal Lake) issued a press release pointing out that, “in light of the recent report from the Comptroller’s office that April revenues were $1.5 billion higher than expected, it appears that the legislation to ‘significantly hike’ gas taxes and licensing fees is unnecessary and one might even say punitive if enacted.”

True. If April’s revenues were indeed $1.5 billion higher than expected, why on earth are increased fees and taxes being brought to the table? Some of our tax-happy legislators are acting like spoiled, petulant brats on Christmas morning who received a boatload of presents and began to cry about not getting more.

Skillicorn continued, “I commend Governor Pritzker for stepping back from a bad idea in the form of a pension holiday when the data from the Department of Revenue estimates that next year’s tax collections increased by $800 million. Let’s give the Trump economic recovery and the enactment of serious reforms, such as amending the pension clause, a try instead of passing more taxes and fees that crush Illinois families.”

These fees and tax increases would further squeeze Illinois families and hurt the many businesses which employ the heads of these households as well. When faced with increased overhead costs, small businesses in particular have to make hard decisions about how to cut corners. Unfortunately, the corners to be cut may be some of their employees. Cutting employees often results in decreased productivity and profit, as well as increases in the workload on the employees left behind, further burdening them for the same pay.

These fee and tax hikes would also have a long-term domino effect on the entire state. It’s been proven that higher taxes often equal fewer jobs, higher unemployment, social welfare programs further stretched, and people eventually moving out of state.

A December 2018 Wall Street Journal editorial reported that “Illinois’ population declined by 157,000 over the past five years, which is equivalent to the mid-sized city of Rockford.” The WSJ also wrote that “these population shifts mean that several states including New York, Illinois and Minnesota are likely to lose House seats after the 2020 reapportionment.”

Are we in need of transportation funding to fix Illinois crumbling roads, bridges and other infrastructure? You betcha. But at what cost? I can attest personally, at least regarding roads within Chicago’s city limits, that driving on some of these streets is akin to driving on the surface of the moon. These aren’t potholes anymore—they’re craters.

Let’s find other ways to fund the transportation and infrastructure needs of Illinois. There’s certainly no shortage of speeding and red-light cameras which are bringing in all sorts of revenue to the City of Chicago, at least. Increasing vehicle registration fees and raising taxes on gas will only drive many more people out of Illinois. Then who are they going to tax?

Take ACTION: Click HERE to send a message to your Illinois state lawmakers as well as Gov. JB Pritzker in opposition to the legislative proposal to more than double the Illinois motor fuel tax. Tell them to stop any attempt to increase the gasoline tax. Let them know that working families cannot afford to give the government more of our hard-earned money on a daily necessity such as gasoline. Moreover, why would Illinois want the dubious distinction of having the highest overall gas tax burden in the nation?

Illinois Can Spend Another $10B on Infrastructure Without Tax Hikes