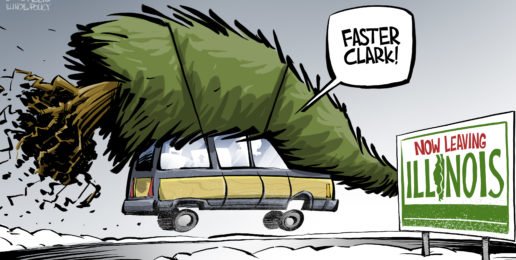 As Its Population Drops, Illinois Has Highest Pension Burden in Nation
Written By John Biver   |   12.21.17
PRINT

As Illinois continues to lose population (we are now the sixth largest state, not the fifth), our politicians in both parties continue to run up debt and unfunded liabilities.

According to the report, Illinois’ unfunded pension liabilities amounted to 22.8% of residents’ personal income at the end of fiscal year 2016, compared to a median 3.1% for all states and 1% for Florida, the least burdened state.

Since it is the Christmas season, I chose not to title this article “The Dumbest People in America.” But how else do you describe a state that has 25 percent of its budget going to pay government employee pensions and its voters who continue electing the same people who won’t do a thing about it? And “[u]nder Fitch’s calculations, Illinois’ net pension liabilities totaled $151.5 billion at the end of fiscal year 2016.” Please know that other sources calculate that number as substantially higher. 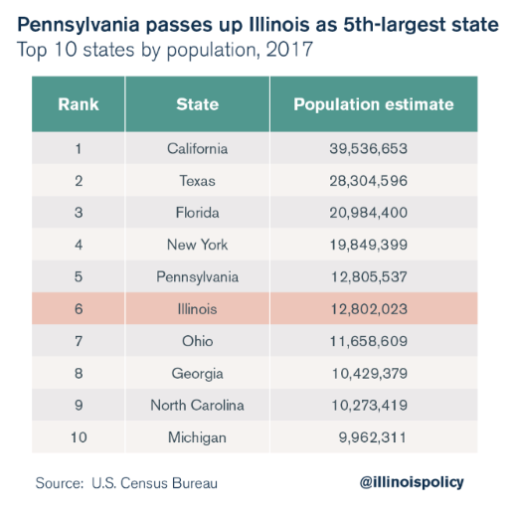 The Wall Street Journal recently featured a related article titled “Illinois Drives People Away: The taxpayer migration continues from the Land of Ever Higher Taxes.”

Makes you proud, doesn’t it?

From the Journal article:

The Prairie State lost a record $4.75 billion in adjusted gross income to other states in the 2015 tax year, according to recently IRS released data. That’s up from $3.4 billion in the prior year. Many of the migrants were retirees who often flock to balmier climes. But millennials accounted for more than a third of the net outflow in tax returns.

Too much for us to distill in one editorial, but suffice to say that exorbitant property and business taxes have retarded economic growth. Illinois’s corporate tax rate is 9.5%, and pass-through business owners pay 6.45%. Though Illinois’s flat 4.95% income tax rate is relatively low compared to its neighbors, Democrats have found other ways to clobber their citizens.

You can let your eyes glaze over at these numbers if you want, but understand that you will be paying more every year if you do.

To paraphrase one radio talk show philosopher — we should all be able to tie half of our brain behind our back and still realize something is amiss.

This helps explain why Illinois’s economy has been stagnant, growing a meager 0.9% on an inflation-adjusted annual basis since 2012—the slowest in the Great Lakes and half as fast as the U.S. overall. This year nearly 100,000 individuals have left the Illinois labor force. The University of Illinois Flash Economic Index, which measures corporate earnings and investment as well as personal income, hit a five-year low in October.

Merry Christmas! Feeling poor yet? Well, at least we know our retired government employees will be enjoying the holidays.

In a recent op ed, Illinois policy experts Ted Dabrowski and John Klingner put it rather simply when referring to what Illinois politicians are increasingly good at: “they offer government worker retirement benefits that are no longer affordable to the residents that pay for them.”

Whether it’s through their property taxes or because of the recent income tax increase, they just can’t afford to [stay here].… This day of reckoning is fast approaching us. I don’t think we want to wait until the absolute last minute to try and do everything we can to really right the ship.

Allow me to define reckoning: It is time to stop talking about “reforming” the government employee pension systems in Illinois. You cannot reform what is purposefully corrupt and completely insolvent.

The Illinois Constitution’s line prohibiting the lowering of government employee benefits should be ignored if it’s not repealed. No clause in a constitution can make this math work. The systems should be cut off from the taxpayers and sent into bankruptcy.

Any candidate suggesting that the pension systems can be reformed is not telling you the truth.