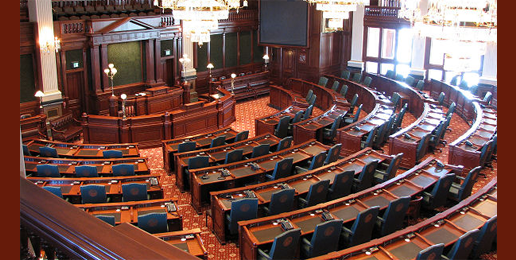 The Illinois Pension Scam: State Officials (Including Conservatives) Have Known About it for Many Years
Written By John Biver   |   08.03.17
PRINT

Last time when we focused on the writings of government employee compensation expert Bill Zettler, I failed to mention that Bill had some great lines over the years, such as:

Despite the wishes and dreams of people on both the political left and political right, the day of accounting always comes. We are at that day right now as taxpayers face hundreds of billions of dollars in unfunded pension liability. (Read this if you think that under-funding is due to a failure on the part of taxpayers. It’s not.)

“If something is impossible,” Bill also said, “it’s not going to happen.” There is no way all the state pensions will be paid. In fact, those government employees who are already retired and collecting their generous pensions are stealing from future pensioners.

Were you aware of the fact that twenty-five percent of our state’s budget currently goes to fund government employee pensions? In other states the number is about four percent.

The math doesn’t work and cannot be made to work. If you want to learn more about just how bad the pension system currently is, I would encourage you to check out the annual pension study conducted by Taxpayers United of America. One of the best resources they provide is the list of retired government employees whose pensions are over $100,000.

Are you ready for this? There are currently 17,000 of them — and the number goes up every year.

For the most up to date information about where the state’s pension systems stand now the place to go is the Illinois Policy Institute’s website. For several years now, their researchers have been firing off warning flares about the dangers ahead. How Republican and conservative state legislators, let alone our Republican governor, have failed to notice, is a mystery.

If they had noticed, the problem would constitute a big part of their message to their constituents and the hard working families around the state.

There are proposed reform bills, but they all fall way short. To be honest, it’s as if the authors are not reading the works of Bill Zettler or the Illinois Policy Institute.

As for Governor Bruce Rauner, he boasts continually about wanting to spend more money on the K-12 system.

Where does he think a lot of that money is going?

I’ll give you one guess. That level of ignorance is almost incalculable. More money for the worst run level of government in the state?

The solution is a push for universal school choice where the money follows the student. That is where the savings will come, as Illinois families will be freed from the government school monopoly, and move to more economical and effective education options. Short of that, Rauner will never fulfill his constitutional duty to propose a balanced budget.

If Republican leaders had truly noticed those IPI and Bill Zettler warning flares, they would have spent the past many years making sure that enough Illinois taxpayers would be informed and thus demanding that the problem be fixed.

Up next: More about the Illinois pension scam.