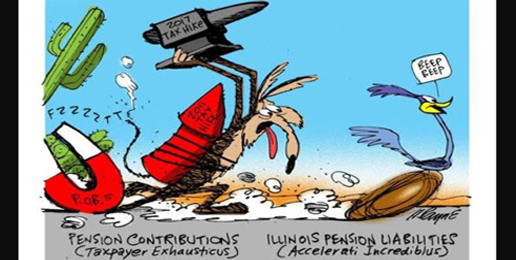 Why is the Illinois Family Institute publishing another article about state government employee pensions? Because excessive taxes in Illinois are putting a strain on Illinois families — and 25 percent of our state budget pays those overly-generous pensions.

People like pension expert Bill Zettler pointing out that out a dozen years ago. Whenever I have the opportunity, I mention it as well in my articles. Did people believe Zettler or me? It doesn’t matter — now they must contend with Dabrowski and Klingner.

Their new report is linked here:

Wirepoints also has articles about it here:

Here is just an excerpt from that last link:

The actual growth in benefits handed out to state workers and retirees since 1987 has dwarfed everything else in the economy, from incomes to inflation to population to the state budget. Multiples times over.

This has all kinds of obvious implications for the economy, growth, outmigration and most importantly, the lives of ordinary Illinoisans.

Pension growth — at nearly 9 percent a year for 30 years — is swamping everything else. It’s no wonder why Illinoisans in so many parts of the state are struggling with high taxes, weak job prospects and stagnant incomes.

Also, Dabrowski calls it corrupt (as I do):

[A] financial mess like this would normally be investigated. Any business that ignores or hides a massive liability for decades will end up on the brink of, or in, bankruptcy.

If this state were a corporation, think Enron or Worldcom, all kinds of regulators would be sniffing around and asking all kinds of questions. How did lawmakers get this so wrong? Was the extreme growth in benefits due to incompetence or was it purposeful?

“Though the odds of a real investigation happening in Illinois are zilch,” Dabrowski writes, “it’s still worth asking the right questions.”

The answers are easy, as Bill Zettler wrote in his book. The system is a scam, orchestrated and carried out by those betting that taxpayers will never learn just how ridiculously high the retirement benefits are for many saintly teachers, school administrators, union officials, and various other groups employed by our governments.

Illinois continues to make national news due to its inability to do basic math. Here are a few examples:

In Illinois, Public Pension Funding Cannot Keep up with Pension Benefits’ Growth
Pension benefits have grown six times more that state revenues, 8.4 times more than household incomes, and 9.5 times more than inflation. A major driver of this benefit growth is collective bargaining, which allows government employee unions to negotiate with public officials over pay, benefits, working conditions, and other matters. Unlike in the private sector, where employers have strong incentives to rein in labor costs, public sector unions face relatively little employer resistance to their demands, since both sides in the negotiations are employed by government.

The Pension Storm Cometh?
Public employee unions have managed to extract promises from state and local governments that are simply impossible to keep. And those governments have been papering over the extent of their obligations with accounting assumptions that are so overly-optimistic as to be deceptive.

In this article, Pension Pulse touches on the legal wrangling over the pension systems:

The way the courts interpret the pension promise may be legally sound but it is economically absurd.

Who made this “legally sound”? Our AWOL conservative elected officials at all levels, who have failed to bring attention to this kind of excess.

I must say, though, I love the use of the word “absurd.”

The Illinois Pension Scam: State Officials (Including Conservatives) Have Known About it for Many Years
b
a
x
r