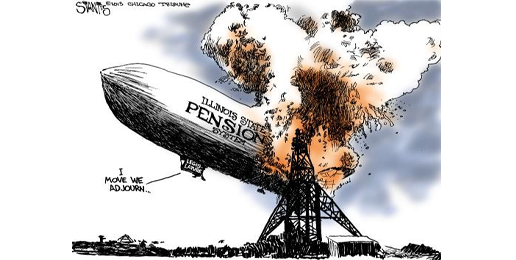 Before citing a few facts and linking to a few articles from the Illinois Policy Institute, let me outline reality in simple terms: the pensions systems cannot be fixed. They need to be shut down, taxpayers should be cut free from the scam, and the state government should get out of the pension business. After decades, it has proven incapable of being trusted with tax dollars for employee pensions.

Some may think my position is extreme. I would argue that anyone pretending that the systems can be salvaged is dreaming “sweet dreams that leave all worries far behind” them.

They need to wake up. Bankruptcy laws exist for just this kind of  circumstance. The system is insolvent. Period. It’s not even close.

Another critical issue is also ignored: Looking at just the teacher union contracts with local school districts, they are premised upon the fiction that government employees and government officials (in this case elected school board members) can legally contract not only with under-aged Illinois citizens, but also unborn future taxpayers.

If contract law is to be applied properly, all the past, existing and current contracts would be voided. There isn’t one of them that has been signed in the past few decades that was not predicated upon the fact that future generations would have to pony up the billions of dollars needed to pay for generous health care and pension benefits once the contracted employees retired.

There is also a serious U.S. Constitutional issue regarding the unequal treatment that is being given to government employees. You can read about it here.

Regarding the Illinois constitution’s clause regarding diminishing benefits, how about we apply those words the same way our state constitution’s protection of religious liberty is being applied to Catholic charities and adoption, marriage, and bed and breakfast owners.

The Illinois Supreme Court has ruled that Illinois taxpayers are on the hook for all the excessive benefits. Conservative legislators especially like to use the court as an excuse for failing to get real about the magnitude of the problem. The court should be ignored. We are not a country or state run by the courts, but rather by the people, and the Illinois Supreme Court doesn’t have the constitutional power to tax and spend.

If members of the Illinois Supreme Court would like to consult with Bill Zettler about common sense, I have his email address. They’d double their understanding of constitutional government in the process. The state’s constitution cannot produce a miracle. Economics always wins and if something is impossible, it won’t happen. Even if you’re saying it should from a seat on the highest court in the state.

As promised, here are just a few facts and a few links from the Illinois Policy Institute:

Some of the biggest drivers include the following facts:

Those are all from this article, which includes this:

The generous retirement benefits pensioners receive are fundamentally unfair to the taxpayers who are forced to pay for them. Private-sector workers are expected to fund the pensions of state pensioners who can retire and draw benefits in their 50s, who can receive annual pension boosts that can double their pension benefits over the course of their retirements, and who get back what they contributed to pensions after only two years in retirement.

Now tell me, how can Republicans and conservatives serving in elective office in Illinois not be motivated to do something after reading just those facts?

A few more links from IPI:

Pensions Over People
The pension problem was created and has been fueled by weak politicians — men and women who decided their next elections were more important than the next generation.

Each Illinois Household on the Hook for a $56K in Government-Worker Retirement Debt
In just six years, the total debt Illinois households are on the hook for has jumped to $56,000, or 31 percent. That’s a $13,000 increase for each household. Total unfunded debt for state and local governments in Illinois now totals $267 billion.

Illinois Needs to End the Third-Party Payer Problem for Teacher Pensions
Illinois’ teacher pension system is structured to allow local school boards to agree to generous contracts, knowing taxpayers across the state will foot the bill.

For even more enjoyable reading, focus on “pension spiking,” the use of unused sick days to ramp up pension checks, and compare how Social Security measures up to being able to retire in your late 50s and get a pension that is an average of your salary for your final four years. Oh, and compare Social Security cost of living adjustments with that of the state’s 3% COLA.

Again, for the latest and best information the current state pension crisis, peruse the many articles at the IPI website.

As a footnote — other top shelf organizations have researched and reported on the government employee pension scam. Here are just three examples (follow the links to learn more from each group):

And this problem is not unique to Illinois — visit Pension Tsunami to learn more.

Read Part 2 – The Illinois Pension Scam: State Officials (Including Conservatives) Have Known About it for Many Years

Adam Andrzejewski: When We Fight Hard with the Facts We Can Win
b
a
x
r