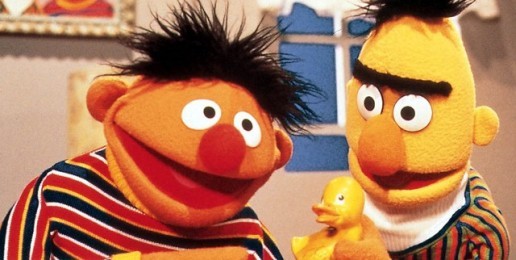 Some pro-family organizations are rankled at the latest attempt by a liberal media outlet to co-opt two of America’s most beloved children’s pop culture icons on behalf of the pro-homosexual movement.

The Muppets Bert and Ernie, perhaps the most recognized characters of the popular U.S. children’s television program Sesame Street, have been used to commemorate last week’s landmark Supreme Court rulings on same-sex “marriage.” The latest issue of The New Yorker magazine shows the duo cuddling on their sofa as they watch a television featuring members of the United States Supreme Court.

Dan Gainor, vice president of business and culture for the Media Research Center, believes children are the ultimate losers.

“What happened to the idea that we could have the innocence of youth?” asks Gainor. “Where children are not abused this way? Where the characters they grow up with and learn from are made gay?”

Gainor cites the move to reverse the military’s “don’t ask, don’t tell” policy, a “Was Jesus Gay” article in the Huffington Post, and now the cover of The New Yorker magazine as examples of a major propaganda initiative to convince the world that a large number of the world’s population is “gay.”

“Literally, from pre-K all the way up to senior citizens, they use TV, they use radio, they use movies, they use news and entertainment and magazines,” says Gainor. “The whole goal is [to proclaim] that all male or all female friendships … must be gay. Their opinion is basically everybody must be gay. No, that’s actually not the case.”

Gainor is not alone in his criticism.

“It’s beneath contempt for a magazine of The New Yorker‘s stature to use Bert and Ernie to celebrate behavior which is immoral, unnatural and unhealthy,” says Tim Wildmon, president of the American Family Association (AFA). “The artist is just dead wrong. This is a tragic day for kids who will wind up in same-sex households.”

Wildmon notes a study by University of Texas researcher Mark Regnerus that concluded children raised in same-sex environments fared worse in 77 out of 80 outcomes when compared to children raised in intact homes by a mother and a father.

“The Bible has had it right from the beginning: marriage is between a man and a woman, and it’s the optimal nurturing environment for children. The New Yorker ought to be ashamed of itself,” concludes Wildmon.

On Friday, columnist Bryan Fischer accused the magazine of promoting “child endangerment” and “child abuse” by using the images of Bert and Ernie. Fischer also cited the findings of Mark Regnerus.

‘Great for our kids’?

The Ernie and Bert characters have lived together for several years in an apartment in the basement of 123 Sesame Street. Although they sleep in separate beds, they share a bedroom, which has led some to speculate the characters portray a homosexual relationship.

In 2011, after an online petition asking for Sesame Street to have Bert and Ernie “wed” went viral, the shows producers’ refuted that claim. That same petition also asked producers to add a transgender character.

“Bert and Ernie are best friends. They were created to teach preschoolers that people can be good friends with those who are very different from themselves,” Sesame Workshop said in a statement at the time. “Even though they are identified as male characters and possess many human traits and characteristics (as most Sesame Street Muppets do), they remain puppets, and do not have a sexual orientation.”

Jack Hunter, the artist who designed the cover and first posted his image on a Tumblr account, said: “It’s amazing to witness how attitudes on gay rights have evolved in my lifetime. This is great for our kids, a moment we can all celebrate.”