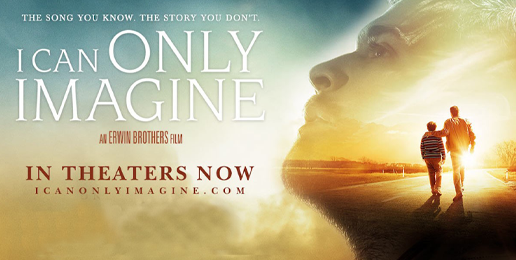 Defying Hollywood, ‘I Can Only Imagine’ Soars at the Box Office, Resonates with Viewers
Written By Tamara Cochran Louris   |   03.23.18
PRINT

That coastal and SoCal enclave, brimming with egos, yet, for the most part, devoid traditional and biblical values, produces movies full of anti-faith, anti-values messages and themes. Week after week films debut that gleefully plumb the depths of depravity, cheered on by jaded critics who only wake up mid-viewing if an envelope-pushing movie grabs their attention.

Hollywood and its Lefty members and supporters, deride film efforts produced by people of faith, expecting only failure and inferior art simply because the creators espouse a belief system that Academy of Motion Picture Arts and Sciences members disdain and don’t understand.

Given that background of low expectations, the Erwin Brothers shocked Tinsel Town’s who’s who with their recent offering, I Can Only Imagine, after the song of the same name.

Jon and Andrew Erwin started their unlikely careers as sports camera men working for the likes of ESPN and Fox NFL. They started their own production company in 2002, producing music videos, garnering Music Video of the Year at the GMA Dove Awards for three years running.

Next the Erwins moved to documentaries before finally, in 2010, changing course to produce feature length films. Their second feature film, Moms’ Night Out, a comedic romp infused with faith, starring Patricia Heaton, Sean Astin, and Trace Adkins, earned a decent box office and tremendous DVD/Blu-Ray sales. Jon and Andrew’s third offering, Woodlawn, based on the true story of God’s love overcoming the racist climate of early 1970’s Alabama football, starring Sean Astin and Jon Voight, racked up over $14 million at the box office and another $9+ million in video sales.

With I Can Only Image, Jon and Andrew Erwin raked in $17 million, coming in a very respectable third in the opening weekend box office, competing with the new Lara Croft Tomb Raider blockbuster, the pro-gay teen movie, Love, Simon, and Disney’s faith-sanitized Wrinkle in Time (in its third week).

But unlike those other Hollywood offerings, the Erwins’ film only had a $7 million dollar production budget and was shown on at least 800 fewer screens (2,000 screens will be added on March 23). In addition, I Can Only Imagine scored an A+ from CinemaScore patrons.

Why did this modest budget, faith-filled film resonate?

To start with, the 2001 song, “I Can Only Imagine,” written and performed by Bart Millard with his band Mercy Me, touched millions and was a hit on, not only Christian charts, but crossed over to “the Billboard Adult Contemporary (where it peaked at No. 5)” and received multiple awards.

The movie employed good marketing efforts, both Christian and secular venues ran the trailer and the early buzz was palpable.

But the real proof was the movie itself.

Starring J. Michael Finley (who made his Broadway debut in Les Miserables in 2014) as Bart Millard, veteran actor Dennis Quaid as Bart’s abusive father, Arthur, all-star performer Trace Adkins (who also had a key comedic, if deadpan, role in Moms’ Night Out) as the craggy agent, Brickell, and film icon Cloris Leachman as Bart’s “Memaw,” I can Only Imagine grabs the viewer emotionally early on and never lets go.

The movie follows the tough as Texas dirt childhood of Bart Millard, and the part music and faith played in sustaining and healing him. We learn of Bart’s childhood and lifelong sweetheart, Shannon (played by Madeline Carroll), who reminds Bart that she’s praying for him through it all. There’s a smaller, but significant, part of the drama coach, Mrs. Fincher (played by Priscilla Shirer, of War Room) who discovers Bart’s beautiful voice and casts him in the lead (Curly) of their high school musical, Oklahoma.

Quaid plays Bart’s dad with a gritty realism that makes him easy to despise: young Millard is physically, emotionally and verbally abused. Forgiveness comes hard. How can any son forgive a son-of-a-gun (Arthur deserved the saltier permutation of the colloquialism) like Arthur Millard?

But Arthur Millard, an aging man steeped in decades of disappointment, permeated with acerbic bitterness, does none of that.

In one gut-and-heart-wrenching scene, Arthur asks, “If God can forgive everyone else, why can’t he forgive me?”

Bart, wrapped in a well-deserved wall of angry protection, spits out, “God can forgive you. I can’t.”

Viewers are left wondering where the story will take them…will Bart forgive his father? Is that the key to breaking down all the other emotional walls in his life?

Along the way, the story captures the era and includes the critical parts of Amy Grant (played by Nicole DuPort) and Michael W. Smith (played by Jake B. Miller), and the soundtrack includes ELO’s Don’t Bring Me Down, and Keith Green’s, Oh Lord, You’re Beautiful, and more.

Families will be relieved to know that, though Dennis Quaid plays wife and child beater, Arthur Millard, to a “T,” the amazingly talented Erwin brothers elicit the sucker-punching emotion with a dearth of actual violence — thank God. The film is enough of a tearjerker, bringing the movie watchers to tears and sniffles by sheer creativity, powerful acting, and music.

I Can Only Imagine, like several other soon-to-debut faith-themed movies, was perfectly timed to open a mere two weeks before the pivotal Christian “holy day” marking the triumph of death over life, of blessing over cursing, and of hope over despair.

As my friend Elizabeth Johnston, aka “The Activist Mommy,” posted:

What an incredibly powerful story. The depth of pain and joy and forgiveness in this movie is sure to change thousands of people’s lives! Please, please, please load your car up with people and go see this incredible film this weekend!

Thank you so much to The Erwin Brothers for your tireless work on this project! You’ve got a winner here!

And thank you to Bart Millard of MercyMe Music for showing us all what it means to forgive like Jesus.

And the crux of the matter is forgiveness. Bart Millard learned the priceless lesson of real love and forgiveness.

Think of the words of the John:

Beloved, let us love one another, for love is from God, and whoever loves has been born of God and knows God. Anyone who does not love does not know God, because God is love. (1 John 4:7-8)

Add to that Paul’s admonition to the church at Corinth:

Love is patient, love is kind. It does not envy, it does not boast, it is not proud. It does not dishonor others, it is not self-seeking, it is not easily angered, it keeps no record of wrongs. Love does not delight in evil but rejoices with the truth. It always protects, always trusts, always hopes, always perseveres. (1 Corinthians 13:4-7)

Jon and Andrew Erwin, along with Producer Kevin Downs (who starred in Courageous and Moms’ Night Out) and Executive Producer Cindy Bonds, have done the near-miraculous: created a movie which moves audiences to laughter and tears and applause AND achieves box office success without insulting our faith and values. Indeed, I Can Only Imagine paints a dramatic picture of faith and forgiveness and reconciliation on the big screen.

Thank-you Jon and Andrew for this movie, a cinematic work of art which serves as a beacon of light in this dark, dark world! Here’s hoping you have long careers, honoring Truth and Life, using the big screen for the biggest message the world has ever known.

Moms’ Night Out: Another Must See Movie by the Erwin Brothers