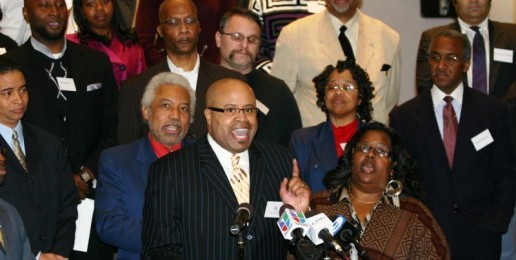 Illinois Family Institute has written a number of columns over the years about the liberal bias of the news media — especially the media in Chicago. This left-wing, anti-Christian bias was never more apparent to me than on Monday as our well-publicized press conference was snubbed by all but one major news outlet. Any doubt about the Chicago media’s lack of journalistic integrity and fairness has been removed.

More than 40 African-American religious and political leaders gathered on Monday, January 17, 2010, Martin Luther King Day, to decry the misrepresentation of King’s legacy and the noble civil rights cause. With the recent passage of the “civil unions” bill in Springfield, one would think that this was a fairly big story. We do, and that is why IFI hired a videographer to record the entire event.

Sadly, the only major secular news outlet in Chicago that covered this important event was WBBM radio and television (CBS). While Univision and WGN News attended the press conference, apparently the producers decided it didn’t fit their messaging on the issue of so-called “gay rights.”

None of Chicagoland’s major newspapers covered the event:

Neither did the following local television news networks:

We should not be surprised by this mainstream media blackout, after all, most of these same corporations participate in Chicago’s annual “gay pride” parade — as debauched a public event as there is in the city — so it is no secret which side they are on in this contentious issue.

While their profession exhorts them to journalistic integrity, their political, social and emotional inclinations pull them in the opposite direction, and it is the people of Chicago and Illinois who have suffered from this media irresponsibility. The Chicago media have become part of the homosexual lobby through their servile pandering to this immoral and medically dangerous agenda.

We’ve known for years how dismissively the Chicago media covers conservatives — especially Christian conservatives — and the moral issues that concern and motivate us. Their bias when covering the issues of abortion, homosexuality, decency, and true Christian faith is painfully clear and consistent. Despite the fact that the state and nation are clearly divided on these controversial issues and that a large percentage of news consumers hold conservative opinions, the media smugly continue to operate as if there is only one credible side to report: the liberal side.

The lack of objectivity and fairness is oppressive, and we must not allow ourselves to become victims to the media’s leftist agenda. That’s why I’ll be asking for your help to disseminate this wonderful event and the message it proclaims to all corners of the state.

Even when the media do squeeze in a few seconds or a few sentences that present the conservative, pro-life or pro-family side of a debate, negative adjectives and descriptors are often used to describe our position. Words like “anti-abortion” and “anti-gay” negatively frame our side of the debate while those on the other side are regularly referred to as “pro-choice” and advocates of “gay rights.” A few weeks ago, political reporter Mike Flannery went so far as to call those of us who opposed SB 1716 “foes of civil unions.” (How about proponents of natural marriage, Mike.)

One of our post-press conference speakers was my good friend Peter LaBarbera, president of Americans For Truth About Homosexuality, who said:

Monday’s Martin Luther King day press conference — which was more of a pastor’s rally affirming God’s design for marriage and family — was one of the most uplifting and heartwarming events I have ever attended. To hear truth affirmed so passionately by so many pastors — who are sick and tired of politicians bending to the demands of homosexual activists — was good for the soul!

I heartily commend Dave Smith and Illinois Family Institute for putting together this wonderful event. And I hope and pray that it will bear fruit for years to come. To that end, I’m going to do all I can to make sure as many of my fellow Illinois citizens see the tape of this pastors’ event — because I’ve had it with the secular liberal media deciding for us what is news and what’s not!

I hope you will join Peter and me in circumventing the media by getting this information out far and wide.  Please stay tuned as we finalize the editing of the event.