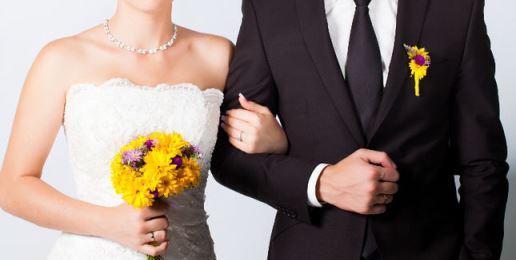 Why States With More Marriages Are Richer States
10.21.15
PRINT

There is a story gaining steam among some academics that suggests the institution of marriage — particularly marriage for parents of young children — could play an important role in strengthening the American economy. It is a story about growth and poverty, about responsibility and work ethic.

And largely, it is a story about men.

According to new research, states with a high concentration of married couples experience faster economic growth, less child poverty and more economic mobility than states where fewer adults are married, even after controlling for a variety of economic and demographic factors. The study, from the conservative American Enterprise Institute and the Institute for Family Studies, also finds that the share of parents who are married in a state is a better predictor of that state’s economic health than the racial composition and educational attainment of the state’s residents.

It’s impossible to say for certain, from the research, whether higher marriage levels drive economic strength, or whether strong economies drive higher marriage levels. But the researchers say there is strong evidence that the two factors reinforce each other. “There’s a reciprocal tie between strong families and strong economies,” said W. Bradford Wilcox, a University of Virginia sociologist with ties to AEI and the Institute for Family Studies, who was the lead author on the report. “That tie goes in both directions. There’s a connection between what goes on in the home and what’s happening in the larger marketplace.”

What might be behind those links? The researchers suggest it’s the effects of marriage on men – particularly younger, lower-educated men. They believe getting married and becoming a father motivate those men to work more hours, bargain for more money and make better strategic decisions — such as drinking less and not quitting a job before another one is lined up — to improve their earning power.

“Marriage does seem to encourage men to get their act together,” Wilcox said. “They have a sense of responsibility. Their parents, their in-laws, their spouse, their neighbors and friends, all these people in their lives are expecting them to be more responsible, and they expect themselves to be more responsible.” 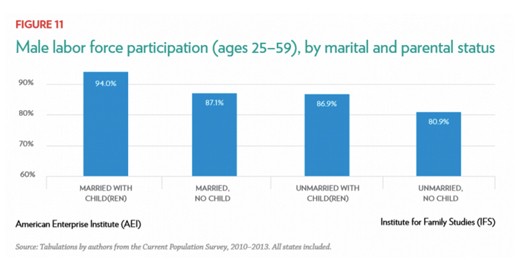 The opposite is true of women, though to a smaller degree: As they marry and have children, they work less. The researchers suggest the boost to male participation from marriage outweighs the drag on female participation, in terms of overall economic impact. 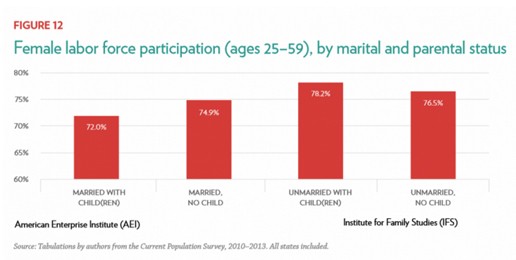 It’s well documented that marriage rates have fallen in America over the last generation. Children today are less likely than their parents were to grow up in a household that includes two married parents. That’s especially true of low-income and lower-educated Americans. Wilcox has long warned against that trend and its effects on society and the economy. 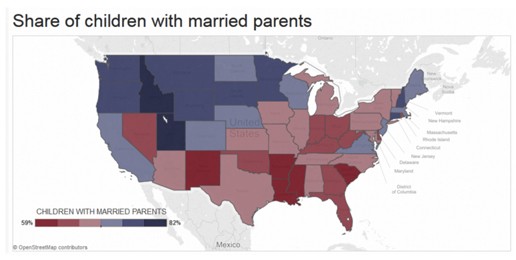 His new report, co-authored by Robert I. Lerman and Joseph Price, finds large differences between states with relatively high and low levels of adults who are married with children. Being in the top 20 percent of those states, as opposed to the bottom 20 percent, correlates to having a state economy that is $1,451 larger per person, with a median family income that is $3,654 higher. It also correlates to a 10.5 percent improvement in the chances that a child of a low-income family will climb the economic ladder as an adult, and with a 13.2 percent decline in the child poverty rate.

The analysis controls for a variety of factors that might have the effect of making the marriage-economy link look stronger. Those include state tax rates and infrastructure spending, educational levels, race, age and violent crime.

The report drew praise from a Elisabeth Jacobs, senior director for policy and academic programs at the Washington Center for Equitable Growth, an inequality-focused think tank. “Economic insecurity and wage stagnation for the bottom 90 percent of Americans are undoubtedly contributing to family instability,” she said. “A growing body of research, including the new study from Dr. Wilcox and his colleagues, supports the idea that policymakers need to view economic stability and family stability as part of a feedback loop.”

Some candidates for president already talk about the links between marriage and mobility on the stump, including Republicans Marco Rubio and Jeb Bush. Wilcox and his fellow researchers suggest that policymakers should pursue a multi-pronged agenda to promote marriage, as an economic strategy.

Their ideas include eliminating so-called “marriage penalties” in federal aid programs that cut off benefits once married couples begin to earn a certain amount of combined income. They worry that by counting incomes jointly, the government is discouraging lower-income workers to shun marriage for fear of losing assistance.

They also propose strengthening vocational education, to boost ” skills, earnings, maturity and self-confidence of young men and women” in order to make them better candidates for marriage; efforts to reduce divorce rates, in part by requiring most couples to wait at least a year before divorcing; and launching a national public-service campaign to promote marriage among young people. They compare that potential campaign to previous campaigns to reduce teen pregnancy – another social trend that researchers have found negatively affects the economy.

This article was originally posted at the WashingtonPost.com

Some Leftist Thoughts for Leftists About Roe v. Wade
b
a
x
r