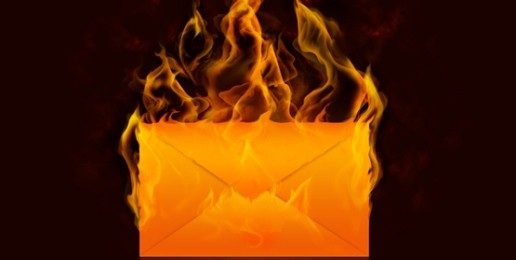 Yesterday’s article on the Grammy’s generated a lot of impassioned responses, including a shocking email that can be read here. **Caution: This is the most depraved, blasphemous, and hateful email IFI has ever received (which is saying a lot), so you’ve been forewarned.

The reason for publishing it is to remind Christians of what evil lurks behind the façade and rhetoric of decency, compassion, love, equality, and tolerance created by politically savvy “progressives.” I’m not suggesting that all “progressives” think as the lost soul who emailed me thinks. I am suggesting that the hate that animates him is not dissimilar from the hate that animates Fred Phelps—a truth that the mainstream press rarely discusses.

IFI is not seeking to sensationalize the evil expressed in this email but rather to illuminate how truly evil the homosexuality-affirming movement is. Those who don’t visit homosexual websites and blogs don’t fully realize that the movement to normalize homosexuality is at its core anti-Christian and unloving.

In the ubiquitous cultural efforts (including of even orthodox churches) to emphasize “relationship,” “dialogue,” and “conversation” (all, by the way, good things), it’s easy to forget the magnitude of the evil that inheres this movement. Just as it’s difficult to fully grasp the evil of the pro-abortion movement without at least occasionally seeing photos of aborted babies, one cannot fully grasp the homosexuality-affirming movement’s enormity (i.e., the degree and seriousness of its depravity) without occasionally hearing what they say in their own words.

Conservatives have a troubling willingness to insulate themselves from this reality. Just telling them that many on the Left say ugly, obscene, blasphemous things is insufficient to rouse them from their moral slumber. Unfortunately, often only a close encounter with this kind of corruption can overcome the apathy, lethargy, or fear that paralyzes them.

But God is good, and IFI received far more positive responses than negative. I will close with this eloquent response from Dr. Daniel Boland who sent me this edifying (and amusing) message about marriage, which refutes those cultural critics who are absurdly arguing that Beyoncé and Jay-Z have made a valuable contribution to the reputation of marriage by making it look “fun”:

Your article on Beyoncé and that Jay-Z person was excellent and much to the point; I hope they read it.

Not surprisingly, the few commentators I have read on this issue entirely miss the point, as did those who produced and applauded the tawdry, hollow spectacle.

I would also add (in my usually timid and tremulous manner) that the commentators who write of such matters as “marriage” so often define it as some sort of dreadful servitude by which people are enchained to an uphill wheel of drudgery and wretchedness. They see marriage as a condition redeemed only by the prospect of occasional periods of enthusiastic rutting unleashed by such events as Beyoncé and Mr. Beyoncé occasion: namely, those moments when women wear sexually absurd and revealing clothes, and men (most appropriately clad in a tux which, one is led to believe, is somehow suited to the stimulation and resurrection of affection and other related concerns) clutch at their women with exhibitionistic abandon.

Rarely do cultural critics—such as this one—have the common sense, the emotional maturity, the personal experience of, or the intellectual discernment to realize or ponder the fact that a stable and dignified marriage has little to do over the years with such sickly-fantasized sexual performances.

One customarily grants showbiz people a degree of leeway and the benefit of idiosyncratic renderings which imaginative artists must have. In this present instance, however (as in so many cases these days), the messages of modern “art” not only invade and distort social and political reality, they assault our deepest traditions, offend our intelligence and seek to re-define the boundaries of cherished moral and cultural reality. Art has become a socio-political weapon for the dismantling of our culture’s finest ideals. Our society is made worse by this reckless, invasive interweaving.

Anyone with a modicum of honesty realizes that a true and lasting marriage (as does life itself) rests not on sickly superficial, crotch-centered fixations but on the deeply demanding discovery and decades-long exercise of a multiplicity of virtues involving self-restraint and mutual sacrifice. The first and most essential of these costly virtues is personal humility which begins not with one’s wardrobe or the trappings of seduction but by recognizing and admitting one’s own weaknesses.

A marriage which is superficially defined by the deceptive, fleeting allure of sex is a marriage suited to moral midgets who habitually distort and eschew—rather than celebrate and elevate—reality. Thus, those stunted critics who celebrate Beyoncé and Her Mate for somehow ennobling the modern notion of “marriage-as-sexual-side-show” deserve no credit. Indeed, they reinforce the escalating shallowness of our culture and exhibit astonishing ignorance about the nature of marriage and, for that matter, the realities of human nature itself.

The Grammys and the Destruction of Marriage
b
a
x
r