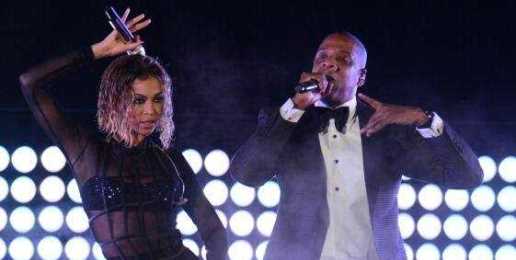 The Grammys and the Destruction of Marriage
Written By Laurie Higgins   |   01.28.14
PRINT

This past Sunday night’s Grammy awards was a tragic freak show that demonstrated the entertainment industry’s arrogance, ignorance of marriage, and disregard for children. It was a gawdy spitball hurled in the all-seeing eye of a holy God.

Beyoncé was later joined by her husband Jay-Z who seems to revel in the lustings of strangers for his wife. What kind of man gets pleasure from his wife’s flaunting of her sexuality and from the certain knowledge that men desire to do things to his wife because of her arousing dress and actions? Is it money that motivates his eager embrace of his wife’s immodesty, or pride that he has access to her body when all other leering men do not? If it’s money, how is he different from a pimp?

Beyoncé’s performance reinforced the cultural deceit that modesty and the notion that conjugal love is private are archaic puritanical irrelevancies. Beyoncé has abused her power as a beloved role model for young girls to teach them terrible lessons about sexuality and marriage. Her performance raises many questions:

Beyoncé’s vulgar anti-woman, anti-marriage performance foreshadowed the climactic setpiece of the evening: Queen Latifah, long-rumored to be a lesbian, officiated at the “weddings” of 33 couples, many of whom were same-sex couples, while accompanied by the preachy, feckless song “Same Love” by Macklemore and the song “Open Your Heart” by the Dorian Gray-esque Madonna. It was a sorry, sick, non-serious ceremony that looked like something from the garish dystopian world of the Hunger Games, replete with a cheering sycophantic audience, faux-stained glass windows, a faux-choir, a homosexual faux-pastorette, and “Madonna” with her faux-face. It was a non-wedding festooned with all the indulgent gimcrackery of Satan’s most alluring playground: Hollywood.

[T]hose Christians still besotted by our contemporary sintertainment standards are not going to reflect on how compromised they all are until next year, when the Grammys will have John the Baptist’s head brought out on a platter. And even then, there will be no little debate about it, because some of our more illustrious cultural thinkers will no doubt point out that John’s somewhat direct method of approaching Herod left something to be desired. It was not — let us be frank — an invitation to mutually constructive dialog. It ended badly, to be sure, and John did have such promising gifts and so it grieves us to say that, at least in part, he brought it upon himself.

A homosexual East Coast journalist called me last week, angry about my open letter to Notre Dame University president Father Jenkins. He is angry at just about everything orthodox Christians say about homosexuality, including the assertion that the legalization of same-sex “marriage” will destroy marriage. He believes that “progressives” are not destroying marriage but, rather, expanding it.

I suggested that if someone were to propose “expanding” the legal definition of marriage to include platonic friends in as large a group as these friends desire, “progressives” who believe that romantic/erotic feelings and binariness are essential constituent features of marriage would likely respond that this redefinition is not an expansion but the destruction of marriage. One cannot jettison inherent features from an institution without changing it so fundamentally that it is, in reality, destroyed.