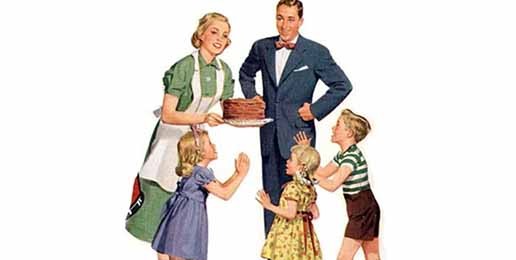 Why was Peter LaBarbera, a critic of the same-sex lobbies, recently jailed in Canada?  Why have Illinois Family Institute and Family Research Council been labeled “hate groups” by the Left?  In simple terms, because they oppose the acceptance of homosexual behavior as normal.

According to the Left no one has the right to “judge” or “impose” their moral standards on others.  The right to express one’s sexual desires, whatever they might be, is so absolute in the mind of the Left that to speak or act to challenge them is an unacceptable affront.

This is what I used to think the Left believed.  But, I now know better!

If the Left actually wanted everyone to live out their own desires, they would have gotten behind the 90+ percent of young women who, according to multiple surveys, desire traditional marriage, children and the opportunity to stay at home to raise them.  But no, that would never do!  While the Left demands public approval for risky homosexual behavior, it simultaneously viciously attacks young women who wish to marry and care for their families!

You see, the Left is not content to merely suggest there are alternatives to motherhood.  That would be like trying to entice someone to trade a new car for a broken skate board.   Why would a woman give up the joys of child-bearing and nurturing to go off and do what men have always complained about having to do, i.e. work 9 to 5?  How could they get women to turn against that which they love so naturally and passionately?  It wasn’t easy, but with intense, vicious, demeaning and multi-faceted attacks over 50 years the Left and radical feminists managed to intimidate multitudes of women into viewing motherhood as a humiliating, almost sub-human vocation.

So, while conservatives are haters for merely suggesting that homosexuality is wrong, the Left has for decades verbally bludgeoned women for caring about the little ones they have brought into the world.  There has been a concerted, frontal assault from the media, the educational establishment, liberal churches and institutions, the government and even groups such as the Girl Scouts mocking and ridiculing women who chose to follow their own aspirations, stayed at home and had children.  Many women have found themselves apologizing for being house wives!

Thankfully, millions of women followed their natural instincts regardless, braved the battle, loved their husbands and nurtured their children.  However, the consequences of this pandemic bullying from the Left  can be seen everywhere, especially in the tragic decline in the well-being of America’s children where today only 52 percent can expect to live with both parents.

But, let us look more closely at why the “stay-at-home-mom” is so loathed by radical feminists and the Left in general.  They would say that she tolerates “abuse” and “slavery,” and is relegated to insignificance in the home while men hold the truly important jobs.  I would ask, “Who is it that says that what men have historically done is so important and that children are not?  That’s right, certain MEN!  The radical feminists find themselves in the ironic position of agreeing with a minority of men who believe that what men have traditionally done is more important than what women have done!  Thus, a woman is significant ONLY if she does “man’s work!” (This in the face of abundant research proving that women quite naturally tend to major on the most important things in life, i.e. relationships.) There is a reason why no pro-athlete has ever looked into a camera and said, “Hi Dad!”

So, in spite of all protests to the contrary, the conduct of radical feminists and the Left verifies that in their heart of hearts they actually believe that “men’s work” is more important than “woman’s work!”  They also believe that what those same men think is more important than what women think, otherwise they would have asked women what their priorities were.  Actually, they wouldn’t need to ask them.  Just watch women in action and one can see that they instinctively know what is truly significant!  Sad-to-say, radical feminists’ submission to certain arrogant men is a big component in the war on traditional “stay-at-home-moms” over the last 50 years.

So, what does the Left really want?  Total and unrestricted sexual liberty! Sure, they want every other kind of liberty as well, but they especially want nothing of God’s morality.  They seek unrestricted licentiousness.   They are a living embodiment of Psalm 2:

Why do the nations rage and the people plot a vain thing?  The kings of the earth set themselves, and the rulers take counsel together against the LORD and against His Anointed, saying ‘Let us break their bonds in pieces and cast away their cords from us. . . .’

Yes, the Left proves the eternal relevance of God’s Word by fulfilling it before our eyes.  Their REAL design is to cast off all natural restraints that God has placed upon us and live as wantonly as they please.  Thus their support for homosexuality and hatred for the natural family.

The traditional, healthy family, by its very existence, exposes the lie of the so-called “alternatives” as light exposes darkness and therefore must be eliminated. Sadly, because of the current political power of the Left few public figures are willing to stand in opposition to their “culturacidal” mission.

But, for argument’s sake let us take their own words at face value for a moment.  If homosexuals are just living out their own natural desires, and we ought to encourage them to do so, then does it not follow that all the women who wish to live out their natural desire to have children and stay at home to nurture them also OUGHT TO BE ENCOURAGED AND SUPPORTED?  Is it not the epitome of hypocrisy for the Left to demand we support their choice even as they excoriate traditional women for theirs?  Of course it is.  But, evenhandedness is not a strong suit of the Left.

Then, on top of their breathtaking hypocrisy is the fact that multiple studies show that in every regard those who live a traditional lifestyle live longer, are healthier and happier!  And children raised in a traditional environment are healthier, stay in school longer, do better academically, are far less likely to live in poverty or do drugs, and generally avoid gangs and other issues with the law.  Make no mistake.  Drive through neighborhoods that are safe and stable and they will always consist primarily of traditional, multigenerational families.  Always!

So, if we are “haters” for opposing homosexuals following their “natural inclinations,” as destructive as they are, then what are we to call those who for decades have sought to destroy the traditional family and have viciously attacked young women as stupid or ignorant for simply wishing to act on their natural and healthy desires to be wives and mothers, and who have done so much to create safe and stable neighborhoods?  “Haters” seems far too kind.

And finally, what are we to say to the millions of children who have suffered the often irreparable damage done by the Left’s assault on women, motherhood and family?

“Get them some therapy” somehow doesn’t cut it!

The New Sex Primer
b
a
x
r